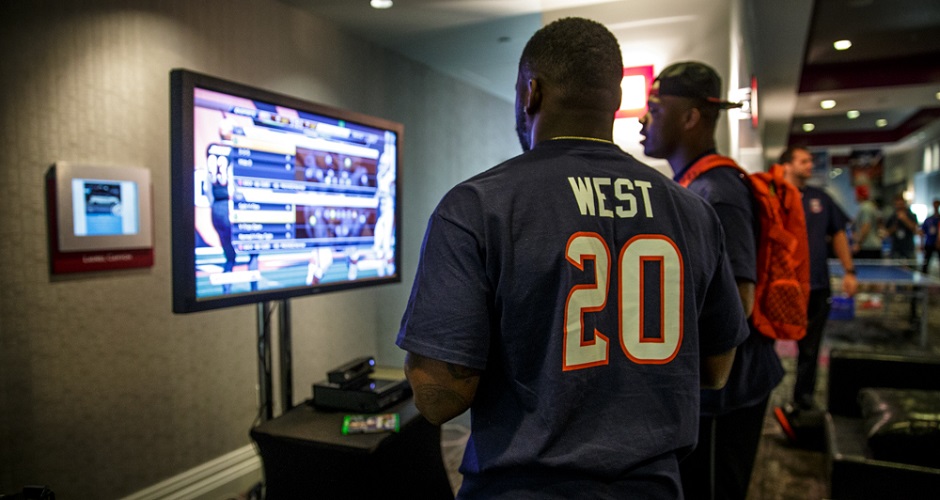 There is a corporation funhouse that supplants itself as part of the NFLPA’s commemorative 2014 Rookie Premiere event in Los Angeles. Gargantuan enterprise assets like Panini America, Nike, Topps, and Fandeavor will offer exclusive seminars as a way of developing “long-term relationships” with these vigorous specimens we call athletes; quite the collective treasure-trove.

Meanwhile, patrons in attendance will rival one another for opulent tours of the LA Memorial Coliseum while hash-tagging “Rookie Premiere” on their Twitter accounts among others. If you are an avid sports aficionado the spectacle is all the more congenial. Likewise, the players relish the hospitable assemblage. However, where does the human element extend beyond the glossed over Topps’ cards, prodigious sports apparel, and financial consulting sessions?

Fandeavor.com’s advertisements of this year’s Rookie Premiere heightens the total fan experience with amplified descriptions. Once in a Lifetime Experience. First time Rookies will put on a Jersey. Intimate access to future NFL Stars. You can call these statements sheer puffery or approximated judgements, but does that “intimate access” signify a comprehension of the players’ identity beyond the helmet donned on Sunday(s)? Is the mere purchase of a rookie jersey or 3 second snapshot alongside these chiseled stalwarts an accurate testament to the experience being “intimate” as Fandeavor suggests? Do we saunter away from the Coliseum’s three day amusement with an informed intelligence about who these 40 some odd humans are past the surroundings of corporate glitz? Perhaps that is not the primary intention of this celebratory showcase, but the entire extravaganza draws one to wonder who these guys are off-the-field.

When you attempt to define “intimacy” what you’ll realize is that the very word encompasses a ring of affectionate embrace. Rookie Premiere invitee Derek Carr will have the opportunity to strut his skill set at the same Coliseum this upcoming fall. What some NFL enthusiasts will fail to identify outside the standard mementos’ purchases and autograph sessions with Carr is that intimacy in his household involves the tender love of family coupled with faith. On August 6, 2013, Carr’s newborn son Dallas was taken to nearby Valley Children’s Hospital in Madera, California on account of emergency surgery for twisted intestines.

If that wasn’t horrifying enough, Carr learned a day later at Fresno States’ practice that Dallas would have to undergo a separate medical procedure for partial intestine removal. All of these complications occur amid marriage and preparation for the 2013-2014 college football season.

“I’m glad I had my helmet on,” [Derek Carr] said. “I never want my teammates to see me like that. I was crying. I remember [offensive coordinator Dave] Schramm hugging me. He said, ‘your faith and your family is more important. Get out of here. Go take care of them.’ Coach Schramm’s point is an indication that Derek’s unparalleled devotion toward the game also strives to compensate as a solution to human problems during times of despair.

Players’ adopt a mentality that their lone competitive edge exhibited on the field is transferable in conquering off-field-feats. They’ve been thrown into the spotlight and accustomed to importing that winning mindset in all their daily endeavors. A recipe where family, faith, and community merge as the mixing ingredients to a perfect team shouldn’t be overlooked. Despite a three week hospital recovery, Carr’s son Dallas healthily prevailed. While Carr’s case is one of many rookie stories, the point is not to isolate an individual, but demonstrate how the broadcasted public relations version of “intimacy” induces us to neglect the human narrative at times while forking over paychecks for a sense of perceived closeness by way of memorabilia purchases.

Close (or “intimate”) access to NFL prodigies is an often erroneous conception with the prevalence of endorsement deals, new car aroma wafting about, and general hype of the occasion. Sure, acrobatic stunts will be performed throughout lengthy photo-shoots, and players will listen attentively for professional career development advice. Though we can only become so “intimate” with these prized behemoths we witness taking the field of glory, that should never hinder us from recognizing the dominate forms of intimacy beyond the corporation’s sell-all scope; precisely the human niche engraved in a player’s backstory. The zealous fan who is cognizant of this human element past the gameday flare, now that’s intimacy.