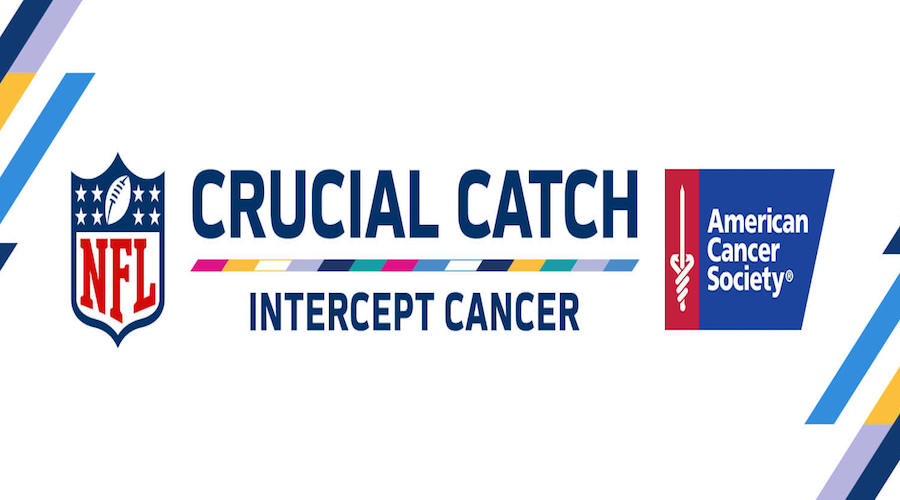 The NFL and American Cancer Society (ACS) have partnered for the 10thyear in a row to support the fight against cancer through the “Crucial Catch: Intercept Cancer” initiative. After nearly a decade of working together to fight breast cancer, the NFL and ACS are expanding the effort to tackle multiple types of cancer. The initiative is recognized all year but throughout October, NFL teams are recognizing Crucial Catch at home games and events with local organizations to bring awareness to the cause.

Since 2009, more than $18.5 million has been raised and donated to ACS through the partnership. Funds donated through Crucial Catch this season will be directed toward support of three screenable cancers: breast, colorectal and cervical. This year’s campaign includes new digital features where NFL players talk about cancer’s impact on their lives. Players including Vikings quarterback Kirk Cousins, Lions linebacker Eli Harold, and Seahawks quarterback Russell Wilson participated in the videos. Crucial Catch is also promoting a new app called the Defender which provides personalized tips on how to reduce your risk of cancer.

Additionally, NFL games this month have featured Crucial Catch apparel with multi-colored logos representing all cancers. NFL teams have the option of supporting early detection and risk-reduction efforts for one or multiple cancers in-stadium and in their communities. In addition, players may wear cleats, shoelaces and wristbands in any color representing the type of cancer awareness they support and/or have been impacted by during their team’s Crucial Catch game.

Players and teams have been documenting their personal stories and activities on social media with the Crucial Catch hashtag (#crucialcatch). Here is a brief recap of happenings from across the league:

The @Vikings surprised every staff member with a pair of shoes specific to a form of cancer that has impacted their lives to help honor loved ones who have passed, encourage those who are currently fighting and remind others to be vigilant in their screening. #CrucialCatch pic.twitter.com/HfF1Ff8JNu

.@Grindin_59‘s grandmother, Dorothy McElroy has been battling cancer and hasn’t been to Chicago to see him play due to her health challenges.

Jim Kelly returned to the hospital where he was treated to surprise cancer patients and survivors.

Our players teamed up with @tcjayfund to help make some days brighter at @WolfsonChildren.#CrucialCatch pic.twitter.com/LipYrHk7Bf

Sunday, @KennyYounggg will honor his father, who passed away this year from colon cancer. #CrucialCatch pic.twitter.com/6qCswM91v9

Eli Manning has been helping kids with pediatric cancer for years. The @Giants QB shares why he’s so passionate about the cause. #CrucialCatch pic.twitter.com/T4viRe23xd

Visit http://www.nfl.com/crucialcatch to learn more about the Crucial Catch initiative.