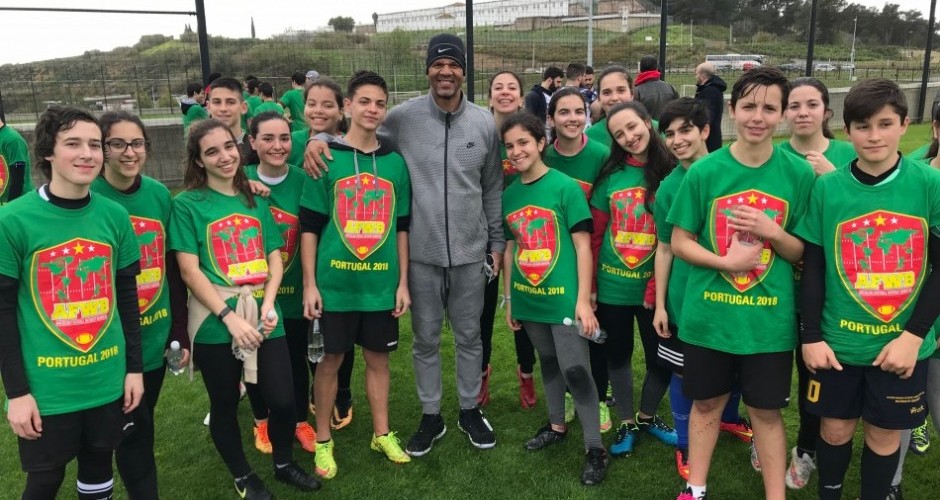 Earlier this month, former Buffalo Bills Hall of Fame wide receiver Andre Reed joined American Football Without Barriers (AFWB) to bring American football to Portugal.  AFWB is a nonprofit organization with a mission to provide at-risk, underprivileged and disadvantaged youth with opportunities that promote physical fitness activities, overall wellness, and educational advancement.  In addition to their humanitarianism, AFWB looks to contribute to the globalization of American football by offering free football camps in countries where they feel they can make a positive impact both on and off the field.  After the success of their first five international camps located in China (2013), Brazil (2014), Turkey (2015), Egypt (2016), and Finland (2017), AFWB decided to host their sixth-annual Football Camp in Portugal (2018).

The team of NFL humanitarians arrived in Lisbon, Portugal on Wednesday March 7th where they would have dinner with the US Ambassador to Portugal, George Glass, and take part in community events over the next few days.  Marshawn Lynch wasted no time introducing American football to the Ambassador when he went “Beast Mode” and attempted to tackle Mr. Glass.  “Marshawn’s been Marshawn”, Reed said.  “Great guy!  He is full of jokes, is always laughing, and never a dull minute when he’s around”.  One thing is clear, he didn’t choose to go so he wouldn’t get fine, he chose to go to give back.

After dinner with the Ambassador, Reed and company attended the Russ concert, where one can only assume that Marshawn continued providing unforgettable moments with his “spectacular” dance moves many have already witnessed on the sidelines of any Oakland Raiders football game.

The next morning, the AFWB group hosted a camp for firefighters and children impacted by the devastating Portugal fires that tragically took the lives of over 100 people in 2017.  The giving back was just getting started.  On March 8th, the team would pack up and head more than 170 miles south to Algarve, where the following day they’d visit Albufeira orphanage and spend time with the kids.  “Obviously the kids are great to be around and for them to learn a little bit about American football and then talk with them about everything from being a kid, to what do you want to do, go to college, etc.”, said Reed.

The official AFWB camp ran March 10- 11.  Camp coaches arrived early each day to set up approximately eight to nine different drills based on position, allowing children to get better at a position of their choosing.  Day one consisted mostly of footwork and technique drills, but on day two participants were able to strap on the pads and let loose!

After camp ended, Reed and the rest of the AFWB crew headed back to Lisbon for few days to do a bit of sight-seeing for themselves.  In a world that seems to be flooded by either fake or disappointing news, it’s refreshing to see some of the world’s best talents take time out of their lives to give back to those less fortunate – sentiments echoed by host and Head Coach of the Algarve Sharks, Lance Heron:

“We are honored to have NFL players take time out of their busy offseason to come spread American football across Portugal. It is the first time we can remember this many NFL players coming to our country. We feel blessed they are willing to commit their time to grow American football as well as highlight Portugal’s nonprofits that are doing great work in our community.”

To find out more about American Football Without Barriers please visit the following: