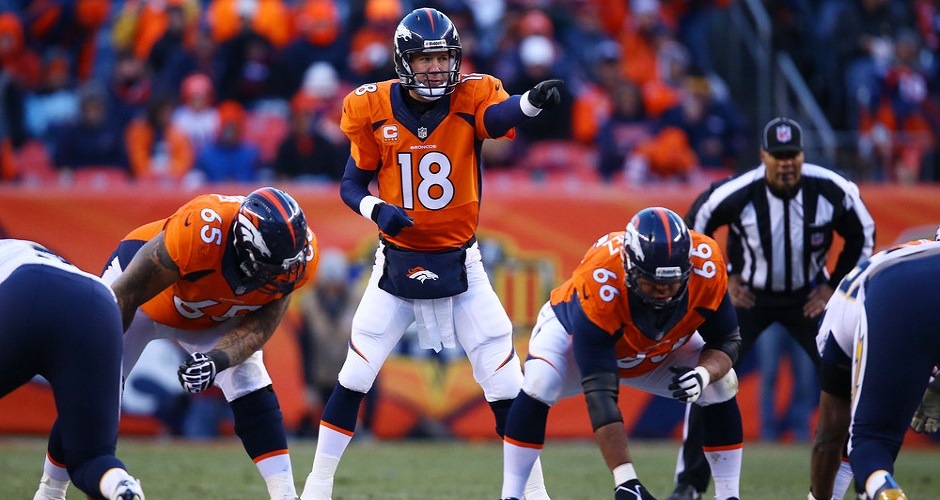 Now that the entire NFC has been completed a couple weeks ago, it is time we move on to the AFC. Today, we’ll be going over the AFC West as I review each team and give my prediction for their record and what will either be pushing them or holding them back. So without further ado, let’s get right into the AFC West Team Predictions.

Denver Broncos – With a the loss of TE Julius Thomas, a new coach in Gary Kubiak, and a new offensive mentality, the Denver Broncos will look very different next year. However, they still have star QB Peyton Manning, WRs Demaryius Thomas and Emmanuel Sanders, and starting RB CJ Anderson, so they’ll survive. They may not be as explosive as the previous 2 years. However, the new strategy may be better for them in the playoffs. I’ve criticized Kubiak for being too conservative in clutch situations, but will Manning give him the option to reel him in late? I doubt it.

Kansas City Chiefs – Just like the Broncos, I expect the Chiefs to take a step back. Star RB Jamaal Charles is another year older with another year of 250 touches under his belt. Starting QB Alex Smith still is trying to find his 1st TD to a WR since 2013, and WR Jeremy Maclin will have to get readjusted to the offense he once knew when Coach Andy Reid was in Philly. TE Travis Kelce will look to make that leap to being an elite TE this year. The defense led by the GREAT LB group of Tamba Hali, Derrick Johnson, and Justin Houston will be tough once again, but I think the offense will struggle and hold them back.

Oakland Raiders – Despite what I am predicting for their record, I think the Raiders will be much improved this year and they are one of the teams that could do much better than I am saying. I think QB Derek Carr has all the physical attributes needed to become a franchise signal caller. RB Latavius Murray is being hyped to do what Darren McFadden never could stay healthy long enough to do. Their 1st round pick, WR Amari Cooper is a stud, while free agent WR Michael Crabtree isn’t great, but is a solid upgrade over what they trotted out there last year. Former LB Khalil Mack will be a full time DE and pass rusher this year, which is more natural for him. Look out for this team in another year or 2.

San Diego Chargers – Most people still have the Chargers as a middle tier contender for a playoff spot. I think they are a team that is breaking down and may be 1 injury from a top 5 pick. QB Philip Rivers can still sling it, I like 1st round pick RB Melvin Gordon, and WR Keenan Allen is still there, but aging veteran, TE Antonio Gates is suspended for the 1st 4 games and most importantly to me, their offensive line is horrible. The Chargers have collected good skill players without making sure the meat and potatoes of the offense is set. That will hurt them this year and you’ll see that in YPC and Sacks Allowed.

The AFC West as a whole is not as electric as I think it has been in previous years. The Broncos should win the division pretty easily with no injuries, which is always the ultimate equalizer. Oakland is on their way up while San Diego is a couple offensive linemen from being right at the top. It’s a division that is pretty hard to predict because I think all the teams have enough talent to win, but who does have talent in the NFL? At this point in the game, experience and heart could be all you need to put you over the top, in the AFC West.