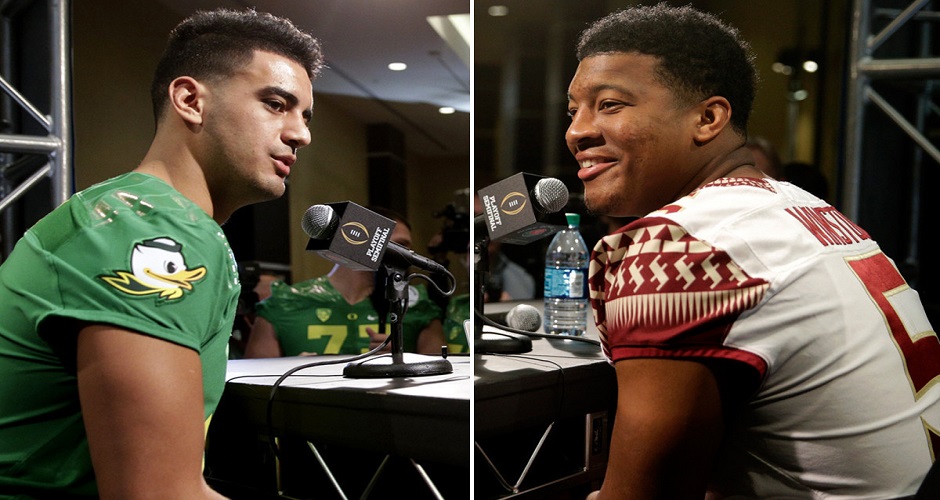 As most of you probably know, Jameis Winston and Marcus Mariota are the only two QBs that will likely hear their name said in round one unless something crazy happens. I consider Winston the better pure QB and compare his style to that of a Ben Roethlisberger. I look at Mariota in the same way as the new-aged QB who may not be as accurate, but his athletic ability gets him out of tight situations. I think that Mariota’s playing style resembles Colin Kaepernick. These two will likely be the top two players chosen in next week’s 2015 NFL draft.

If Todd Gurley didn’t tear his ACL late in the year last year, I would say he would be chosen in the top six picks, as high as #2. His combination of speed, power, and vision are rare and he could be looked at as a top 10 type back before he even stepped on the field as a pro. When I think of him, I think of Arian Foster. Melvin Gordon is more comparable to Jamaal Charles. He may not be as fast, but he has great vision and is very quick to hit holes. This draft is very deep with solid RBs, but these are the only two that I can see with 1st round talent.

Probably the deepest position in this entire draft is the WR position. There are a lot of players that are 6’2 or taller, around 200 pounds, and can run a sub 4.5. In terms of athletic ability, those are just ridiculous measurables. I consider Amari Cooper the best of the bunch and have him rated higher than Sammy Watkins from last year. Kevin White has Julio Jones-like potential. It’s hard to find a comparison for Jaelen Strong, but I see Kenny Britt before he tore up his knee.

Breshad Perriman is probably has the most buzz around him right now. He did not run at the combine, but ran a sub 4.3 forty on his pro day. He may have the highest ceiling of any WR in this draft and compares favorably to Josh Gordon. I was not as high on DeVante Parker as everyone else, but he’s growing on me. With most people comparing him to AJ Green, he also has #1 WR potential. Phillip Dorsett is considered the best slot WR in the draft. I also like Tyler Lockett, but Dorsett stood out more at the combine and his pro day. Lockett’s a better route runner, but Dorsett is more explosive.

Brandon Scherff can play LT, RT, and G, so he maybe the 1st one taken of all the offensive linemen. Ereck Flowers can also play both tackle spots and will make for a great value pick. Collins makes for a better RT than LT, but that is a much needed position with a lot of teams. Erving is the most versatile OL in the draft. He can play all five spots, but is dominant at C. His 1st round value is as a Center only. Andrus Peat and DJ Humphries both fit better as LTs rather than RTs, but that happens to be the money position for the offensive line so that raises their value.

If it wasn’t for off the field issues, Dorial Green-Beckham would definitely be a top 5 pick. He has Megatron type ability, but he doesn’t exactly endear himself to team front offices. TJ Clemmings can play both tackle spots and is a rising name. He may find himself at the end of the 1st round. Maxx Williams is the top TE prospect, being the best of an ugly group of TEs this year maybe the only thing that helps his value. Devin Funchess is a WR/TE tweener, once he accepts being a TE, he’ll be better off. Nelson Agholor is a late rising prospect that I would be shocked to hear his name called late Thursday.

All in all, this year has a lot of good offensive prospects that can be impact players in the NFL. Offense is what has been pushed more and more in the past couple years in the league. All of the above have the potential that could impact the teams that take them from day one of the season. On Thursday night we’ll hear a least 15 of the names I mentioned above. So I suggest you get to know them because your team may be their next employer.