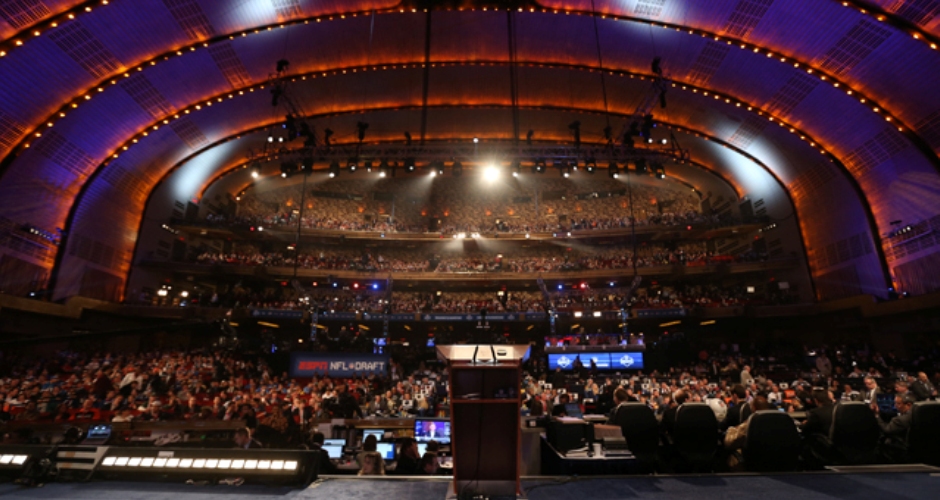 My Reverse Mock Draft: Round 7 to Round 1

The is the time of year that bring blossoms and blooms in bushel baskets everywhere you look; I don’t mean the ‘Darling Buds of May’ I am referring to mock drafts, the internet is chock full of them. I hesitate to add to the surplus, but when I gave in I decided to do something a bit differently. What I will be doing over the next two weeks is releasing a seven round mock draft, but I will begin with round seven and work backwards to round one, so here is the first installment.

Round 7
With Selection #207 The Kansas City Chief select-WR Justin Brown, Oklahoma, Brown finished with 66 passes for 822 yards and has returned 22 punts for a 13.6 average and a touchdown, he has size at 6’3 1/8” 207 and is fairly polished route runner.

At Pick #208 The Jacksonville Jaguars take RB Cierre Wood of Notre Dame. At the combine Wood ran a solid 4.56 40 placing him 14th best among the 33 running backs that participated in the drill. Wood positioned himself as one of the top performers in the broad jump (10’ 4”) and the vertical jump (371/2”). Both of those results placed Wood 4th among running backs. Wood will have a chance to compete for a spot with Grimes, Murphy, Todman and Toston in the change-of-pace back role.

#209 The Oakland Raiders select Bradley McDougald, FS, Kansas. As part of cementing the change in draft philosophy in the land of the Silver and Black, the new regime is placing their whole focus on getting tough football players. A 4.74 time in the 40 would have meant that Oakland would have had no interest just a few years past. However a 4.49 at his pro day and his old school, hard-nosed attributes will endear him to coaches.

At pick #210 The Philadelphia Eagles take Luke Marquardt, OT, Azusa Pacific. He has some rather impressive attributes despite coming from the NAIA his length and strength are both elite. At 6’8” 315 he is enormous and he is a good enough athlete to be a fit one the right side.

At pick #211 The Detroit Lions pick WR Conner Vernon of Duke. My scouting notes on him are virtually identical to the ones I had on Ricky Proehl when he came out of Wake Forest in 1990. Average size and speed, precise route runner with hands that are among the best in all of college football.

At selection #213 the Minnesota Vikings draft DT Anthony McCloud of FSU. McCloud is a bit of a conundrum he has talent.

#217 Miami Dolphins RB Ray Graham, Pitt. Ray Graham had several highs and lows while a Pitt panther from a 277 yard rushing performance against FIU to a season ending ACL tear in 2011. His 4.80 in the 40 at the combine likely pushed him down a bit. Still he can be an effective change of pace back.

#218 New England from Tampa Bay selects DT Mike Purcell of Wyoming. He has some position versatility, is tough and a tiny little bit nuts, in a good way.

#219 Oakland – from Carolina CB/FS Josh Johnson, Purdue. Johnson is a better football player than he is an athlete; he might be tried at safety.

#220 Seattle – from New Orleans Tanner Hawkinson, Kansas. At 6’5” 298 he needs to add bulk and strength but he has the type of potential that gives him a chance to stick.

#221 San Diego picks John Boyett, Oregon. Injuries have pushed this truly good player down the board, but Boyett can be a future starter if he can stay healthy.

#223 Pittsburgh chooses SS Don Jones Arkansas State. Jones might be the most athletic SS in the draft. His 4.42 40 and 42” vertical are both rare marks.

#224 Miami goes for Dallas RB/WR Onterio McCalebb, Auburn. Speed is what makes the 169 pound ‘running back’ of interest he can burn but how will he be used?

#226 Eagles (from Bears through Buccaneers) pick LB Phillip Steward, Houston. Steward is athletic with enough size to play WLB and has coverage skills.

#227 San Francisco takes from Cincinnati WR Keenan Davis, Iowa. Davis finished with 571 receiving yards last season after catching 50 passes for 713 yards and four touchdowns as a junior in 2011. He has size at 6’2 1/8” 216 and is fairly polished route runner.

#228 Washington picks OLB/DE Brandon Thurmond UAPB. At 6’11/8” 253 it’s likely the FCS sack master will be evaluated as an OLB, with 16.5 sacks he was a major combine snub. Thurmond is on the cusp between being too small to play DE and is not extremely fast he is mostly skilled and determined he really reminds me of NIU DE/OLB Larry English who was drafted in the 1st by the Chargers.

#229 Minnesota: DE Mike Catapano, Princeton Catapano. He averaged 1.2 sacks a game his senior year, he plays with a passion and was a standout at East West Shrine practice week in Tampa.

#230 Indianapolis goes for SS Dexter McCoil, Tulsa. At 6’4 224 with 4.61 speed there is a chance he could be asked to bulk up and to move to WLB, McCoil has totaled 17 Interceptions in his college career and has had 3 80+ tackle seasons, he is quick despite his frame.

#232 Green Bay picks FS Jakar Hamilton, SCSU. Hamilton is a transfer from Georgia;”Hitman” as he had been known, is aggressive and fairly explosive.

#233 Houston: RB Stephon Jefferson, Nevada. While Jefferson is no burner he’s the type of one cut powerful runner who could fit the zone blocking system.

#234 Denver: DT Mike Purcell, Wyoming. Purcell is an appropriately tough 6’2½” 303 interior player who is strong against the run.

#236 Atlanta Falcons choose LB Herman Lathers, Tennessee. The word tough is thrown around quite liberally in football; however for a young man who spent much of his youth battling bone cancer it truly applies in his college career. He had his spleen removed, underwent shoulder surgery, and then came the broken ankle. Size and durability are real issues. Still with what he’s overcome its hard not to think he’ll find a way.

#237 San Francisco picks Terren Jones, Alabama State. At 6’7 ¾” 341 Jones is impossible to miss and though he’s not as polished or powerful as DJ Fluker he has nearly the same potential. He’ll likely be tried at ROT and possibly OG.

#241 Seattle: (Compensatory Selection) Kemal Ishmael S. At 5’10¾” 212 UCF – Ishmael was extremely productive, with 116 tackles this season and a sack as well as three interceptions this season along with three forced fumbles.

#243 Atlanta: (Compensatory Selection) OC/OG Joe Madsen. He is a true ironman in his time at Morgantown he started 46 games only missing a 2 bowl games for academics. At the least he’ll add depth at two spots.

7 41 247 Baltimore: (Compensatory Selection) QB Ryan Griffin, Tulane Competition at backup quarterback is what Ryan Griffin will provide. He has impressive potential and survived playing at Tulane.

#248 Tennessee: (Compensatory Selection) OT/)OG Chris Hubbard, UAB. While the 6’3 ½” 286 Hubbard will need to get bigger and likely will kick inside to play in the NFL but he is one of the 5-10 most athletic offensive linemen in this draft.

#249 Atlanta: (Compensatory Selection) OT/OG Stephane Milhim, Umass. I am projecting the FCS OT standout to OG due to his 6’3 7/8” 300 pound frame, he fits a team that uses man and zone blocking principles.

#250 Miami: (Compensatory Selection) FS Keelan Johnson Arizona State.  Johnson can play either safety spot or even CB in a Cover-2, his 6’0” 209 frame and 4.54 speed are above average as well.

#253 New York Giants: (Compensatory Selection) DT/DE Spencer Nealy Texas A&M. Three or four teams night be considering him for the 5 Technique. He moved from defensive end to defensive tackle because the team needed him to. He’s slightly crazy in the classic D line way and the Giants would move him around ala Tuck.

#254 Indianapolis: OLB/DE John Youboty, Temple. The Marshall transfer is the younger brother of Ashton. He has been a survivor; as a sophomore at Marshall in spring 2010, Youboty suffered what Thundering Herd doctors labeled a career-ending spinal injury. The nerve in the C3 vertebra was pinched when he was blindsided at practice. His mother passed after being stricken with Liver cancer. Later as a 405 pound bench presser he held up at DT despite that fact that he was 258 at his heaviest, now back to 250 he is seen as an OLB by many. His mostly solid performances on tape have made him this year’s Mr. Irrelevant.