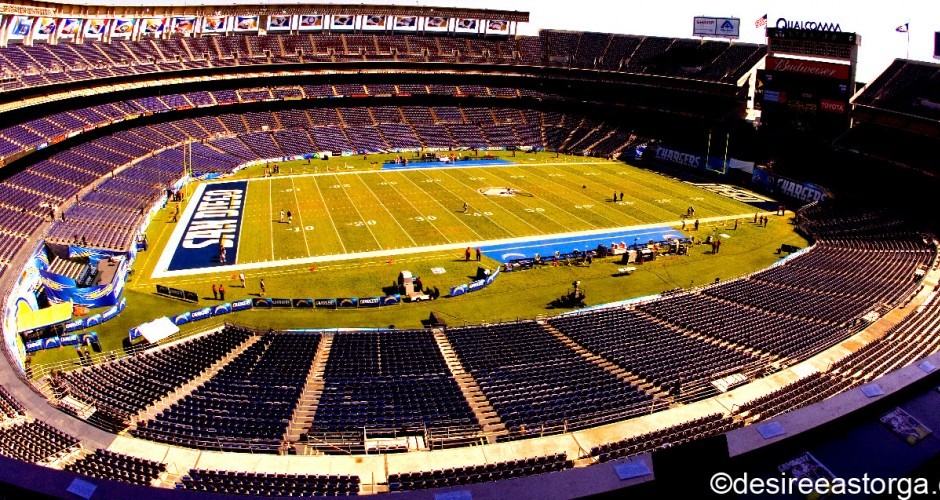 Fun, music, excitement, family, reunions and even national media at Chargers Camp with a week left till the first preseason game. Five of the ten practices open to the fans remain, with Chargers Fan Fest 2014 at the Q on Saturday. A sense of family encompasses as well, with veteran players, all taking pay cuts. LT, Ladainian Tomlinson, back on the field along with Head Coach Mike McCoy on with The Jim Rome Show.

.@Chargers head coach Mike McCoy is on with @JimRome tonight at 6 PM ET from #ChargersCamp pic.twitter.com/R6muAYIgED

Tons of enthusiasm and hope, even drones flying and this is essentially across the league at every camp, feeling or saying the same, but theirs a little magic here in San Diego. There is definitely a bit of a buzz in the atmosphere.

Family, Mike McCoy and Tom Telesco brought a stronger feeling of family when they came; it has spread throughout the entire HQ’s. Jeromey Clarey, who played with multiple injuries taking a $3 million dollar pay cut (actually $2.95M) and you have a player like Jarrett Johnson who played with a broken hand along with Eddie Royal, both taking pay cuts a few months back. It is a TEAM, no I in TEAM; a team is a family, all like a car needing every part to operate. San Diego has something special, I’m not talking sorcery, but I am seeing a conjuring of an extraordinary quality or power showing up at Camp for this team.

Fast and Speed two additives used to describe the players and tempo, add music as well.

“I am really excited and to be honest a lil shocked the youth, the youthful talent and youthful speed on our team, it was really weird cause was different from just mini camp thought I had a pretty good feel how we were gonna be in mini camp and we get here and… just with the addition of Brandon Flowers and the rookie playing (referring to rookie Jerry Attaochu) …. Everyone we have, can move.”

Charger Practice Mix, music blaring first day at camp, HC McCoy had encouraged players to give song requests, only one did, so the first day all that played was country. It didn’t take long, actually day two came around from twanging to rock to all kinds of bumpin in the air, lending a fun atmosphere during camps and bringing up the energy level.

#FlashBackFriday as LT was back on the practice field, although in a different suit, while working with the NFL Network. Reunited with former teammates, enthusiastic about the run while coining it a “three headed horse” and lots of love from the Chargers Family.

Ladainian stating the backs, “compliments in a perfect way.”

Describing Woodhead as a “match up nightmare” and the addition of Donald Brown, ” the perfect mix between Ryan Mathews and Danny Woodhead ……..and a great screen runner and he can block.”

With only hours till the HOF Class of 2014 ceremony and first preseason game, most warranting to give a big shout out to the one and only Mr. Andre Reed, San Diego native, on this special Saturday. Huge deserving congratulations!!

Congrats to the entire Class of 2014:  Derrick Brooks, Ray Guy, Claude Humphrey, Walter Jones, Andre Reed, Michael Strahan, and Aeneas Williams.  All will be formally enshrined into the Pro Football Hall of Fame during the memorable ceremony on Saturday, Aug. 2, 2014.

Less than a week till the Q will kickoff with the Cowboys in town, but who’s counting? I know I am!

Cheers till next week!

You can follow me on insta or twitter
@desiree_astorga
Time out with Desiree, the silver linings
An optimistic realist with intermittent football tourettes all the while searching for the 3rd dimension.
The DesireeSHOW
Photographer, producer, host, reporter, radio & TV, One-man-army, artist, skateboarder