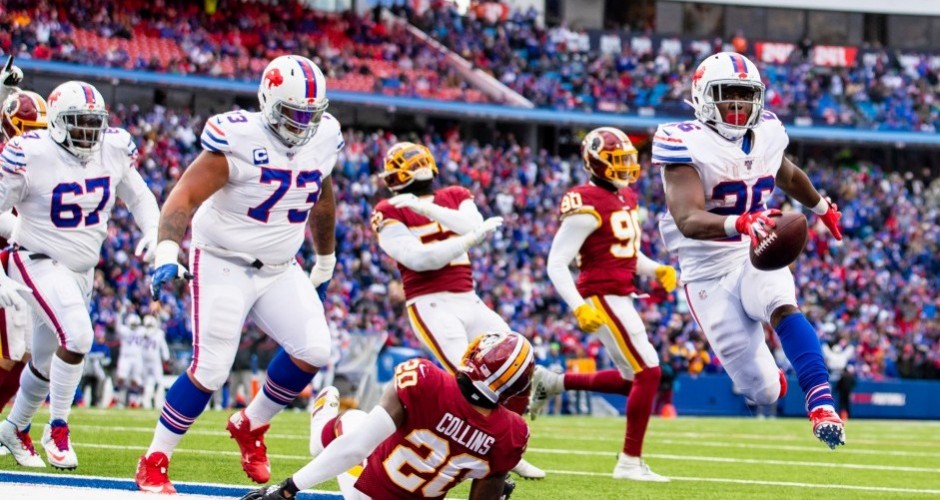 It wasn’t always pretty, but rookie running back, Devin Singletary, nicknamed “Motor”, would start the game and be the driving force in a Bills 24-9 victory over Dwayne Haskins and the Washington Redskins on Sunday afternoon. On the way to 95 yards rushing and a touchdown, the rookie runner out of Florida Atlantic University showed the explosiveness and playmaking ability that caused Buffalo to select him with their third-round pick in the 2019 NFL Draft. Singletary would also add 45 yards receiving on the day, all of which came on a 49-yard screen in the first quarter. If that math looks off to you, it’s because his other two receptions went for negative yards. As stated earlier, it wasn’t always pretty for Buffalo.

Redskins running back, Adrian Peterson, would come into this week’s matchup with a total of 383 yards rushing on the year. That number isn’t quite on pace to reach his 2,000-yard goal for the season, but the 34-year-old showed us early on why he thinks catching Emmitt Smith one day is still a realistic achievement. The future Hall of Famer rumbled for 101 yards rushing in just the first half of Sunday’s contest, but adjustments made by Bills head coach, Sean McDermott, would limit Peterson to just seven yards on eight carries in the second half. “All Day” would fail to find the endzone, as would the rest of his teammates, extending the Redskins streak to 13 straight quarters without a touchdown.

It was Dwayne Haskins first NFL start, but the rookie signal caller couldn’t find the momentum needed to quiet the Bills Mafia. Buffalo’s elite pass defense would harass the former Buckeye all day, hitting him often, pressuring him regularly, and sacking him on four different occasions. Looking at the bigger picture, it wasn’t all bad for the first-round pick. Haskins didn’t turn the ball over, and on three different occasions put the Redskins within scoring range. If Washington’s front office can surround him with a few weapons, those three field goal drives can easily turn in to touchdown drives.

As for Buffalo’s signal-caller, Josh Allen, he did what was needed to win the game. His statistics: 14/20 for 160 yards passing and a six-yard touchdown that would be hauled in by Cole Beasley. Allen’s stats certainly won’t “wow” you, but the second-year quarterback got through the contest without a turnover. For the Bills to continue their winning ways, Allen cannot continue fumbling the football. He’d drop the ball twice today, once on an errant snap he recovered himself, and another time on a seven-yard run that was fortunately recovered by Bills guard, Quinton Spain.

The 6-2 Bills will head to Cleveland in Week 10 to take on a 2-6 Browns team that’s desperate for a win. The Browns have yet to win a game at home this season and head coach, Freddie Kitchens, is on the hot seat.