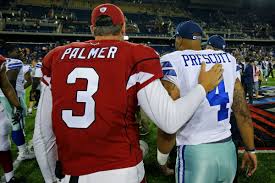 The last time the Dallas Cowboys rode in to the Wild West for a Monday Night Football game against the Arizona Cardinals (12/25/1995), Jerry Maguire was still fighting for Rod Tidwell’s 4 yr. / $11.2 million contract, the Cardinals still played at Sun Devil Stadium, and Budda Baker wouldn’t be born for another 16 days.  Outside of an impressive performance, and an even more impressive hurdle from fullback Larry Centers, the movie Jerry Maguire was the only thing good that came from that day – for Cardinals fans, anyways.  The Cowboys ran away, or should I say passed away with it, as Troy Aikman threw for 350 yards, two touchdowns, and breezed to a 37-13 victory over Buddy Ryan’s Cardinals.  In all fairness, the Cowboys would return to Sun Devil Stadium a month later to win Super Bowl XXX over the Pittsburgh Steelers, 27-17.

While the division rivalry between the Cardinals and Cowboys died back in 2001, make no mistake about it, they are still rivals.  Just ask former Cardinals defensive end Bertrand Berry about the time his own father showed up to a Cardinals vs Cowboys game wearing blue and that’s all you need to know about the hatred the teams have for each other.  Cowboys fans won’t hesitate to remind the Bird Gang, or anyone else for that matter, about their five Super Bowl rings, but what they won’t remind you of is how they’ve dropped four straight to the Cardinals.  In fact, if we go back to 1999, the Cowboys are just 1-7 when traveling to the desert to face the Cardinals.  Those are some nice rings, though.

There will be no Rod Tidwell to help the Cardinals this Monday, but there will a J.J. Nelson.  Weighing in at only 160lbs, many scouts likely labeled him a “shrimp” coming out of college, just like the fictional Tidwell.  His small frame will always be one of the first things people talk about, but like a scene taken from Jerry Maguire, there’s at least one man there to defend him when they call him “shrimp”.  “You’re talking about his slight build, but he catches the ball with really, really strong hands,” quarterback Carson Palmer said. “He’s really smart. He sees defenses unfold. He’s one of those guys that when the lights come on, he makes plays. He’s a big playmaker.”  Not to mention, that 160lb frame is moving at UAB blazin’ speed!  J.J.’s 4.28 speed has allowed him to score in six of his last seven games.

There will be no David Johnson (RB), D.J. Humphries (LT), or John Brown (WR) this Monday, either.  However, there will be a John Wetzel (LT), who was the fourth highest graded left tackle in week two while filling in for an injured Humphries.  There will be a Chris Johnson (RB), who just last week showed small flashes of ‘CJ2K’ and why it might have been a bad idea to release him in the off-season.  While his critics seem to be growing exponentially, there will still also be a Carson Palmer (QB).  Has CP3 played amazingly? No. But passes such as the 45 yard bomb to Nelson last week showed us he is still more than capable of making throws that very few quarterbacks can.  Look for Arizona to get future Hall-of-Famer, Larry Fitzgerald, involved early.  Fitz has been quiet through the first two games, but at home and on the big stage is where he shines the most.  With a large amount of blue expected to be in attendance, Fitzgerald’s role will be key in igniting the Red Sea their home opener.

As if coming to Arizona hasn’t been difficult enough on the Cowboys, this trip comes after an embarrassing loss to the Denver Broncos.  A 42-17 shellacking has certainly pumped the brakes on any Super Bowl talk.  Superstar running back Ezekiel Elliot rushed for a total of eight yards against the Broncos. Eight.  To put it in to perspective, both starting quarterbacks in the same game finished with more rushing yards than Zeke.  Even Tom Brady, outrushed Elliot in week two.  There were likely a few running backs that tripped and fell for more than 8 yards last week.  You get the point.  Not only was he unable to muster up even one yard per carry, he was criticized for his lack of hustle throughout the game, leaving some to wonder if his off-field issues are finally taking a mental toll.  Regardless of how bad Zeke played, no one else played well enough to point the finger.  After throwing only four interceptions all of last season, Dallas quarterback, Dak Prescott, threw two interceptions and finished the game with a QB rating of only 68.6.  Things won’t be any easier on the sophomores this week as they are up against another top 10 defense in Arizona.  The Red Birds will also be getting back their starting $LB, Deone Bucannon.  Bucannon may be on a snap count but he possesses all the tools necessary to frustrate opposing offenses.  After allowing Denver quarterback, Trevor Siemian, to throw for four touchdowns last week, Dallas is thanking their lucky stars to be getting Orlando Scandrick (CB) back this week.  With rookie corner Chidobe Awuzi (hamstring) questionable, and corner Nolan Carroll (concussion) already ruled out, Scandrick will need to knock the rust off in a hurry.  Regardless of who suits up for the Cowboys secondary, you can be assured that Arizona head coach Bruce Arians will try and take the top off the defense.

At 1-1, no one is impressed by the Cardinals start.  Monday Night’s game on the national stage can change all of that.  A win against a team many were calling the favorite to be crowned NFC Champions puts Arizona back on track and provides them with much needed momentum moving forward.  A loss puts Arizona at 1-2, making next week’s game against the 49ers a battle for last place.  That’s a place no one wants to be.  With injuries to receivers, tight ends, lineman, and running backs, it becomes clearer each week that the Cardinals season lies solely on the shoulders of quarterback, Carson Palmer.

It’s now or never, Carson.  Show us the money.