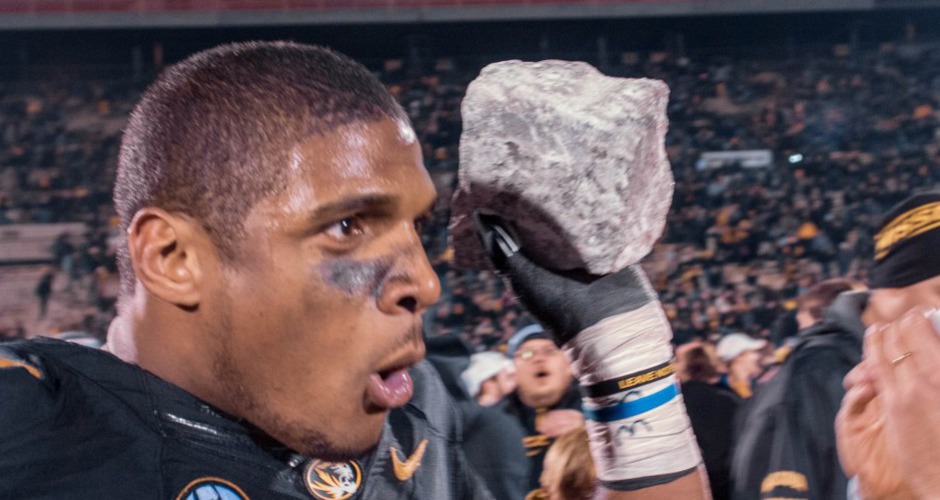 INDIANAPOLIS – He wanted this day to go very differently. He knew that would not be the case, for he knew he was different.

“Good afternoon. My name is Michael Sam. I play football for the University of Missouri, as you may know.”

He wanted to have his hands washed of this. He had no desire to go through everything. Again. The first time had been a leap of faith into the welcoming arms of teammates. The second time had been a bold step forward into an unknown and unsuspecting world.

“Missouri is the ‘Show Me State’ and you’d think I’d have shown you guys enough these last couple of weeks,” he said. “But I’m learning with the media, you guys still want more, so ask your questions and I’ll answer them the best I can.”

When you tell the world without prompting that you are gay, that’s one thing. To tell the world that you’re gay and you intend to be the best pass-rusher in the NFL is something else.

He wanted to talk football Saturday at the NFL Combine. Instead, he talked once more about lifestyles and support systems and lovers and haters and slurs and encouragement and everything that goes into helping a somewhat gentrified and overwrought and out-of-touch room of media types understand why he did what he did when he did it.

If that last sentence seemed to go on forever, welcome to The Life of Sam.

Whether the NFL knew it or not, it was moving inexorably toward this day, thanks to last year’s bizarre Manti Te’o story and

this year’s shocking account of bullying in the Miami Dolphins locker room. How NFL executives dealt with Te’o and how it ultimately handles the issues raised in Miami create a framework of morality policing and conduct enforcement that should foster an environment capable of welcoming Sam.

Recently, an ESPN poll of 51 anonymous NFL players found they overwhelmingly would welcome a gay player to their team. But perhaps symptomatic of how complex the issue is, only half said an NFL locker room was ready for it.

NFL executives, again cloaked in anonymity, were harsher, with one even suggesting to Sports Illustrated that Sam could go undrafted.

That’s preposterous, of course. The co-defensive player of the year for the powerful Southeastern Conference does not go undrafted, even if he had one arm, a third nipple and a limp.

Football is football, thank you, very much, Sam seemed to be saying with each answer.

There is a touch of hypocrisy in action, here. Sam didn’t necessary keep his sexuality a secret. Part of the reason why he made the announcement when he did was because he feared someone was going to do it for him. NFL personnel, though they would never admit it publicly, had been asking those close to Sam for months whether the rumors they heard were true.

And while NFL types fretted and chewed their fingernails and mulled societal impact, all they really needed to do was look to Sam’s extended Mizzou family to see how ready the world truly was for a gay player.

“A good proportion of my student body knew,” Sam said. “Word did get out. We protect one another at Mizzou. Apparently, I guess, other schools don’t.”

Sam was not putting down other student bodies when he said that. Rather, he was mocking the question. In this instance, “schools” more or less was code for other organizations, such as the media and the NFL.

After his announcement, Missouri – both its administration and its student body – rallied once more around Sam. He was greeted with a standing ovation at a basketball game. Throughout the campus, “Stand with Sam” buttons were circulated.

Turns out the world actually might be ready for this.

“Everything that my Mizzou family has done for me has been amazing,” he said. “I walk around campus and dozens of students and faculty give me hugs or kiss, start crying in my arms. It’s unbelievable.”

So while some talking heads around the sport will ponder the vagaries of the issue and overbearingly toss around words and phrases such as “chemistry” and “the good of the game,” Sam simply is ready to play the game he was born to play.

If someone wants to call him out, be it to put a rookie in his place or knock him down a peg for seemingly overshadowing teammates with the circus that will surround him, that’s fine. If someone wants to get in his face simply because they don’t like his lifestyle, so be it. He’s ready.

Bring it on, Miami:

“If the Miami Dolphins drafted me, I would be excited to be a part of that organization,” he said. “I’m not afraid of going into that environment. I know how to handle myself. I know how to communicate.”

Arizona Cardinals head coach Bruce Arians idly mentioned his concern for how opposing fans would react to facing a team with Sam on it.

“No, I’ve been getting a lot of great positives from all kinds of fans,” Sam said. “And you know when I’m on the field, I really don’t focus on fans, so I just focus on my responsibilities, which is the guy right across from me.”

And should that guy right across from him have a problem, well …

“If someone wants to call me a name, I’ll have a conversation with that guy and hopefully it won’t lead to anything else,” Sam said.

Eventually, questions began to take a turn toward the product on the field rather than the issues off it. Sam was grateful for the change of topics. By the end of the combine, he will have answered a great many questions concerning whether he is a defensive end or a linebacker, if he can drop back in coverage, and so on and so forth.

But before that, one last question was asked: Did Sam feel like he was a trailblazer? His answer offered all that was important.