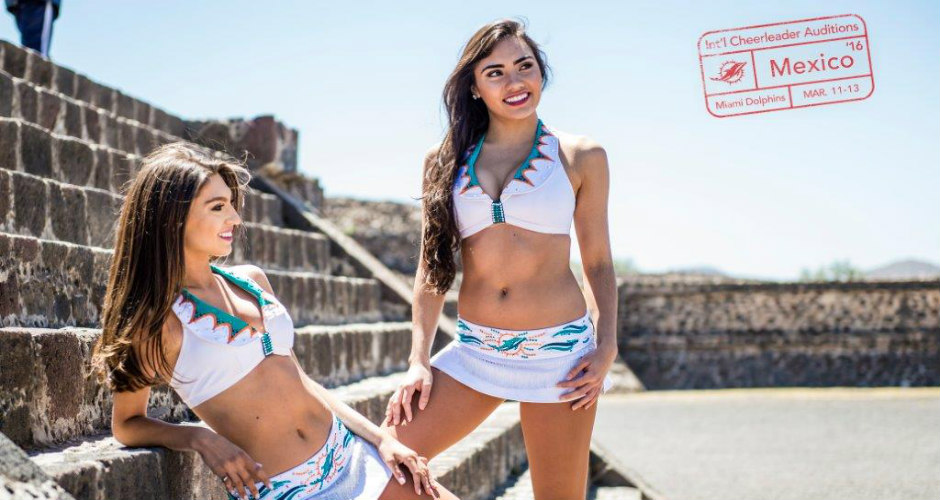 The Miami Dolphins Cheerleaders are making the most out of their time as they travel through Mexico and South America, while holding the first ever-international NFL cheerleading tryouts. The team is there to recruit a new crop of talented, beautiful, humanitarian and hard-working individuals, but they are also there to make a presence, as well as learn the lay of the land accompanied with a little lesson in history.

This weekend Adrianna, Estefania and Monica traveled to Mexico to explore The Teotihuacan Pyramids and Xochimilco. Teotihuacan holds one of the country’s phenomenon’s called, The Pyramid of the Sun, which is one of the largest buildings in Mesoamerica. The women held a photo shoot with the sun beaming down and the winds blowing their hair wildly creating the perfect scene, whilst, showcasing their stunning figures in their aqua, orange and white uniforms supporting their one and only Miami Dolphins.

The Dolphins Cheerleaders were also able to escape to the Xochimilco, the breathtaking city, full of colorful architecture and gondolas navigating the many canals. Xochimilco is one of the 16 boroughs within the Mexican Federal District, which make up what was once an extensive lake and canal system, connecting most of the settlements to the Valley of Mexico touring Xochimilco.

The Miami Dolphins are on the road again as they move from the beautiful pyramids and sights of Mexcio City, Mexico as their third stop on their audition trail and head to Bogota, Colombia to continue their tour. Tryouts in Bogota will be held on April 2nd and are open to ladies at least 18 years of age by May 1, 2016.