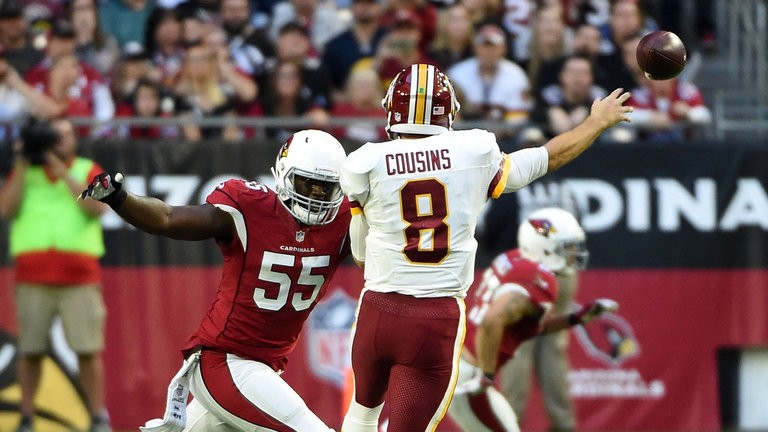 In week 15, the Arizona Cardinals will be on the road to take on the one-time division foe Washington Redskins, where the Cardinals have lost eight straight games. Arizona’s season may be a disappointment, but there are a few teams who are far more disappointed.  The Redskins are one of them.  With a quarterback that will make nearly $24 million this year alone, Washington certainly expected to be much better than 5-8, currently sitting third in the NFC East.  Then again, Kirk Cousins can only do so much with the weapons he has been given.  The Skins leading receiver, Jamison Crowder, is projected to have under 900 yards receiving on the year and has scored only one touchdown.  Washington’s 2016 first round pick, Josh Doctson, may have five touchdowns on the season, but outside of that he has been anything but impressive.  He missed nearly every game due to injury his rookie season and in 2017 Doctson has only amassed 27 receptions for 388 yards.  He hasn’t had a game in his career with more than four receptions.  Cousins was probably chomping at the bit to link up with newly acquired receiver Terrelle Pryor this season, but after trying to tough out an injury suffered in week two of the regular season, Pryor eventually ended up on the IR after losing his starting role.  It doesn’t end there, joining Pryor on the injured reserve have been key players such as 2017 first-round pick Jonathan Allen (DT), linebackers Will Compton, Mason Foster, and just about anyone who even thought about playing running back (Rob Kelley, Chris Thompson, Keith Marshall).  Hall of Fame running back, John Riggins, is probably healthier.

With names like Carson Palmer (QB), David Johnson (RB), Adrian Peterson (RB), Markus Golden (LB), D.J. Humphries (LT), and Jared Veldheer (RT) on an IR list of their own, the Redskins won’t be getting any sympathy from the wounded Cardinals.  Receiver John Brown will miss another game this Sunday and Jermaine Gresham (TE) is questionable with an illness so the already unimpressive passing attack will again rely heavily on the legendary Larry Fitzgerald and one of Blaine Gabbert’s favorite connections, tight end Ricky Seals-Jones.  Seals-Jones has only begun to see playing time in recent weeks and already found the end zone three times.  If Arizona wants to earn their first win in Washington since 1998, 16th string (not really) running back, Kerwynn Williams will need another productive day.  Kerwynn is listed at 5’8”, 198 pounds, but the truth is he’d probably have to be in full pads holding the football, possibly even two footballs, to come close to being that “big”.  It doesn’t matter though; Williams’ play is anything but small.  The man averages 4.8 yards a carry in his four-year tenure with the Cardinals.  It’s a blessing to Arizona that none of the other 31 teams in the league stole him during one of the many times he was put on the practice squad or flat out cut.  With Washington’s run D currently ranking 25th, and Zach Brown (MLB) already ruled out with injury, look for “Kerwinning” to be in the 75-100 yard range when the game comes to an end.

The other key to the Cardinals’ success is an obvious one; pressure Cousins early and often.  When going against an offensive line that has seen 11 different guys play at least 100 snaps, opportunity is there, especially when a man by the name of Chandler Jones is on your side.  Jones continues to dominate and if it wasn’t for the Cardinals 6-7 record he’d also be dominating defensive MVP talk.  Maybe three straight wins will put some “respek” on his name.  After all, J.J. Watt won the defensive MVP when his team had a record of 9-7.  To make matters worse for Cousins, left tackle Trent Williams hasn’t practiced all week and is questionable.  The Redskins have already been eliminated from playoff contention, so it wouldn’t be surprising if Williams was shut down not just for this Sunday, but for the remainder of the year.

On paper both teams match up evenly, injuries and all.  However, there is that one small aspect of Arizona having to travel to the east coast…in the winter.  Kickoff is scheduled for this Sunday, December 17th, 2017 at 1pm (ET).  The weather is projected to be just above 40 degrees and cloudy at kickoff.  Washington is currently favored (-4) with an over/under of 41.  Here’s to .500, again!