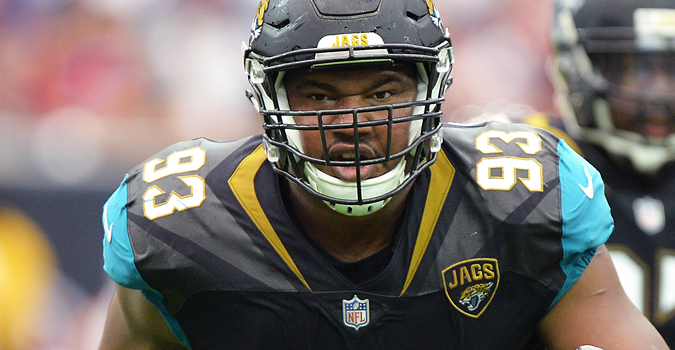 This offseason, Jacksonville Jaguars Defensive End Calais Campbell was faced with an exciting, but very difficult decision.  Knowing he wouldn’t be returning to his current residence in Arizona, Campbell was left wondering if he should return home, or if he should return home.  You see, Calais graduated from South High School in Denver, Colorado where he excelled as a three-sport athlete.  By the time he graduated, his stature, statistics, and work ethic earned him a scholarship to a university of his choosing.  Campbell ended up in the Sunshine State at the University of Miami, “The U”, so it was a bit ironic when the top two teams vying for #93’s services were Jacksonville and Denver.  Jacksonville may not have South Beach, but the palm trees and breeze from the Atlantic feel just the same.

With the free agency period set to begin in just over a day, Calais sat among friends playing Monopoly.  When free agency was all said and done, it would be him that could afford Boardwalk and Park Place.  The market for Campbell started off around $11 million per year, lower than he expected, but a raise nonetheless.  Campbell made it clear, $15 million a year would get him off the market.  After a back and forth struggle that appeared to be much more challenging than any Tackle Calais had ever faced, Campbell chose Jacksonville.  It wasn’t home, but it was familiar enough to be called home.

If his 6’8”, 300-pound frame wasn’t enough, Calais’ four sack debut against the Texans certainly made his presence felt.  In his final two seasons in the Arizona desert, Campbell had 13 sacks total.  He finished this season with 14.5, trailing only one-time teammate, Chandler Jones (17).  Calais’ on-field production, coupled with Jacksonville sitting atop the AFC South, has Campbell staring Defensive Player of the Year right in the eyes.  Very few guys have won DPOY their first year with their new team, but for a team player like Campbell, DPOY isn’t the goal.  Last week, Campbell was able to exact revenge on the team who stole his only opportunity to win a Super Bowl.  Calais was a rookie on the Kurt Warner led Arizona Cardinals team that lost Super Bowl XLIII to the toe-tapping, Santonio-Holmes-Steelers in 2009.  Come to find out, for $60 million the Jags also acquired a psychic.  Prior to the game against the Steelers, Campbell was quoted saying, “We try to win any way we can. One play at a time, and execute, but I’ll take it 2–0 if it comes that way, or 45–42 if it comes that way.  As long as we win, I’m happy.”  45-42 it was.

Even should Calais win Defensive Player of the Year, he’ll be the first to tell you he didn’t do it alone.  Take one look at the Jags defensive roster and it’s clear- they’re ballers!  Campbell didn’t choose Jacksonville just for the money.  Anyone who’s been paying attention could see Jacksonville was on the verge cusp of breaking out.  Campbell just solidified it.  In 2016, Jacksonville finished the regular season with 33 total sacks.  That number jumped to 55 in 2017.  Their record in 2016?  3-13.  This year they finished 10-6, their first winning record in a decade.

Regardless of what happens this Sunday against the New England Patriots, Campbell has helped changed the Jags culture.  He’s already proven to be the best free agent signing of 2017, but a win against the greatest dynasty of all time puts his name in the discussion of greatest free agent signings ever.  He’s not just a resident of “Sacksonville”, he’s the mayor… and he’s putting Duval on his back.  Duuuuuval!!!