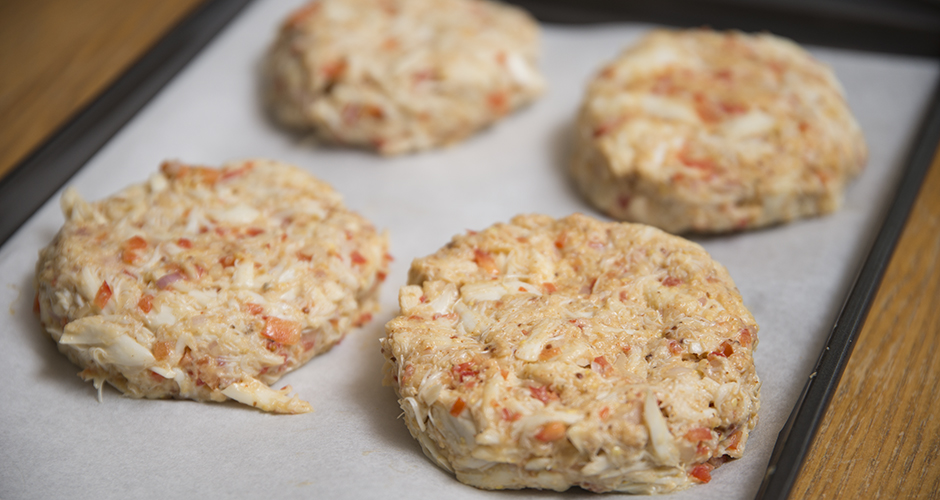 If I say “food” and “Maryland” in a sentence, chances are “crab cakes” come to mind. Crab cakes come in a variety of shapes and sizes, each with different spins for the recipe. Let’s get one thing straight: Maryland-style crab cakes are not Maryland crab cakes. The terms mean two different things, especially to a local (I grew up there. Let’s go O’s!).

There are two distinct elements of a Maryland-style crab cake. This version misses a third component, the “secret” ingredient if you will, of an authentic, local version. The two: jumbo lump blue crab meat and Old Bay seasoning.

The actual crabmeat is important for a few reasons. I find the state’s treasured blue crabs sweeter than other varieties, and the near-iconic texture of a true crab cake comes from the larger chunks rather than finely shredded strands. Crabmeat tends to shred and can become hair-like if over-handled. If you like tightly bound, stringy crab cakes, by all means shred the meat. Just don’t call it “Maryland-style” because it just ain’t so.

Old Bay is also required as Maryland goes. Further south, you’ll find the same loyalty to other seasoning blends. If you’ve been through Louisiana, you know the creole stuff I’m talking about. There are no substitutes for Maryland-style or Maryland crab cakes. I know people who put Old Bay on French fries, salads, pancakes, everything. Old Bay actually has a crab cake recipe on the can. Many will argue that recipe is the real Maryland recipe. It is, I suppose. By it’s not my favorite, which has been hacked from years of eating the things. To each…

In the late 90’s a friend of mine brought me to some dive bar-restaurant that served crabs by the bushel. Even as a local, I can’t stand eating them this way. I much prefer the cakes. The dive bar owner said to try some other place – can’t remember the name – where the cakes were legendary for their size and quality. Cool. That place served 12-ounce cakes, lump meat as big as your thumb, perfectly tender, just barely held together. They were incredible. Many years worth of blue ribbons and awards were hung on the walls, so I asked how to make them. That was the first time I heard of the “secret” ingredient. Three years later, all the way across the state, I had a similar experience. This time, the crab cakes were smaller, but equal in perfection. Asked and answered, the “secret” ingredient was the same.

That Maryland crab cakes have no binder is a fallacy. Recipes all over the Internet call for breadcrumbs, or any variety of crackers. What’s so special about Ritz? I think the buttery taste and small crumb when crushed. Whatever the case, they work and as you find the small joints across the state that serve traditional versions, over and over these crackers are the go-to choice.

You can also broil the crab cakes in an oven. If you bought the cast iron griddle I told about in World-class Burgers, you can grill the crab cakes same as burgers. The difference using the grill versus the skillet indoors is the addition of smoke. Tasty!

In Maryland, crab cakes normally come either as a platter (just the cakes) or sandwiches. I like crab cake sandwiches the best. I recommend brioche rolls for the bun, and I’m a fan of remoulade instead of tartar sauce. You can make your own choice there.

Feeding a crowd? Skip cakes and make smaller, meatball-sized portions. They will cook in less time and are great finger foods.

A word on breading: There is no real “crust” to a crab cake other than the sear you get from cooking. You can bread crab cakes if you want, but in Maryland, we don’t. The risk you run with breading in the recipe above is burning the crust while cooking. Better to bake them I think, or deep-fry. But again, Maryland crab cakes aren’t breaded…

There you have it: the secret is out. Ritz crackers. I’m probably now-banned from the state for sharing but I figure it’s better people know and do it right rather than spread preposterous imposter cakes throughout the nation.

Until next time – A