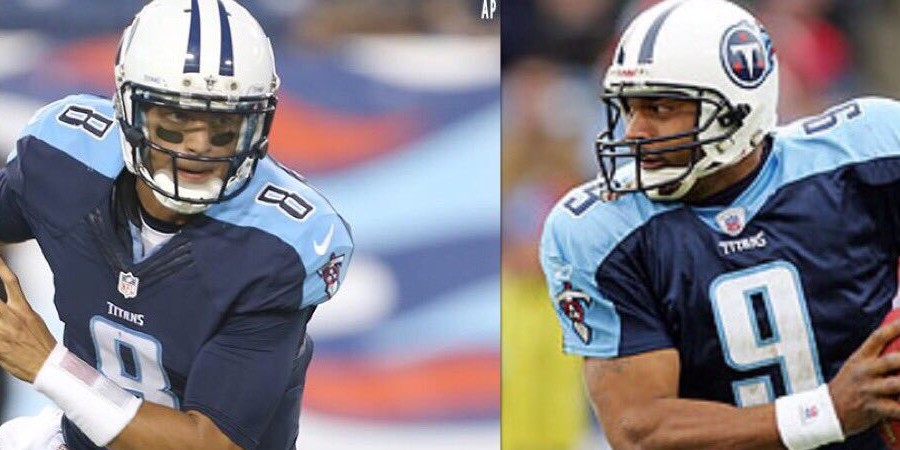 The Titans pulled an improbable win out this Saturday versus the Kansas City Chiefs. They were down 21-3 at the half and then rallied to score 19 straight points on their way to a 22-21 win and a date with the New England Patriots. The win was the first win the Titans had in the playoffs since the 2003 season. One of the leaders of this comeback was Marcus Mariota. The soft-spoken quarterback made the best of one situation when he had a pass batted down on third and goal. He would catch the batted pass and get into the endzone, starting the comeback of the Titans in the third quarter. And of course, he had the big throw to wide receiver Eric Decker that put the Titans up for good late in the game. Despite his great play, Mariota, per usual, he answers all questions with the media in a calm manner, not even getting too excited to answer the questions at all. “That’s what it all came down to. They probably had 11 guys in the box and (I was)just trying to help my guy out.” This is what Mariota said about the big block he had to spring running back Derrick Henry on the run to seal the game. While that statement may not seem like much to others, it may remind some Titans fans of another quarterback that once graced the sidelines of Nissan Stadium back in the early 2000s.

Steve McNair was one of the most popular Titans ever. He was a big. strong quarterback with a rocket for an arm. Before he was known for that though, he was known for things outside of what he did on the field. Mainly, he was known for being the guy that would do whatever it took to win. He would run, block, pass or whatever he has to do to help his team win. In that same vein, Mariota is that same type of player. As fans of the Titans saw, he made some huge runs against the Jacksonville Jaguars in the last game of the season to get them into the playoffs, shrugging off Jacksonville defenders on his way to gaining important yards. And in this Wild Card game versus Kansas City, he threw that big block to seal the game. Both made big plays whether it was them throwing the football, running the football or just selling out for their teammate. And because of that, teammates loved Steve McNair and the current Titans team loves Marcus Mariota. Even with all they do for their teams, both carry themselves with an unmatched humility and a refreshing thought of putting the team first over themselves when they win and the broad enough shoulders to take the blame when they lose (even when some losses were not on them).

Along with the humility and the plays they make, the treatment of both is highly similar. Many remember Steve McNair as the best quarterback in Tennessee Titans history, but it was not always that way. At one point in time, the organization was in transition to becoming the Titans and the fans and organization was not sure what they had in McNair. Sure, he could throw the football deep, but there was questions about him picking up the offense enough to where he could live up to the potential of what people thought he could be. Eventually McNair showed that potential and was one of the driving forces of them becoming a very solid team in the early 2000s. As far as Mariota, he was loved earlier in his career, but many fans are not sure what to make of him. He has been injured at one point throughout every season he has played and this season, his vision when it comes to reading secondaries slipped. That has led to many fans wanting to have him out of here instead of trying to see if he can right the ship after his first iffy season.

McNair and Mariota had different builds and came from different parts of the world, but they both are similar in the things they do along with the temperament that they possess. And for that, Mariota is reminding people more and more of McNair with how he handles himself in terms of taking blame, never wanting to take credit for wins and his style of play. Sure, he has not accomplished the things that McNair has in his career so far and he has not had been as durable as McNair, but we also have to remember that McNair did not get thrown directly into the fire like Mariota did. There are some lessons he still has to learn and hopefully one of those is to learn how to stay healthy. Mariota has some pressure on him right now as some fans are not sure that he is their franchise quarterback. Like he handles everything though, he smiles and continues to do what he does and blocks out the distractions of life. Humble and tough: the McNair and Mariota way.