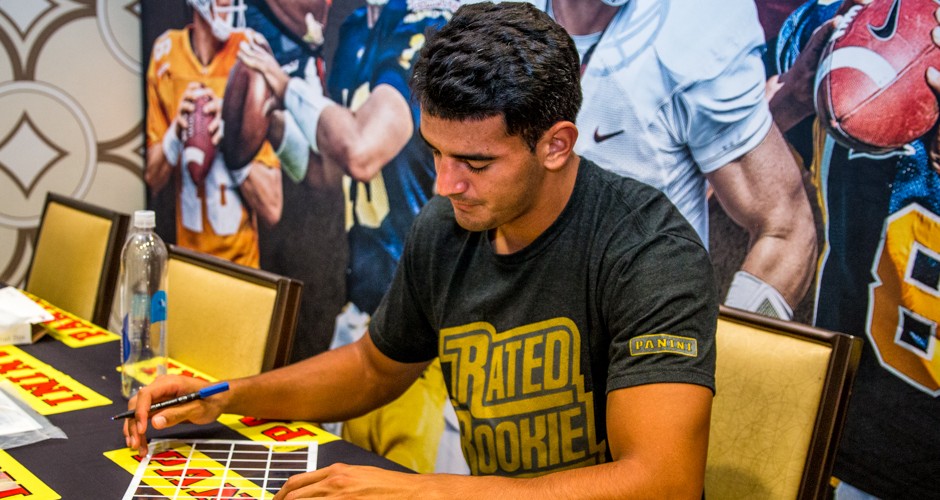 Marcus Mariota is still letting it sink in that he was drafted second in the 2015 NFL Draft. “I have thought about what has happen a little, while I was sitting at home during the draft. I was just reflecting on the opportunity and I am grateful for this dream to come true,” he said at the 21st Annual NFLPA Rookie Premiere.

With the thought that the Heisman Trophy winner is now even more of a household name, also comes a responsibility he has placed on himself. The University of Oregon standout explained this responsibility perfectly. “The culture the roots the humility the things that drive that community… has created who I am. Being a Polynesian athlete for me … the most important things is opening doors for kids behind me. Any Polynesian athlete will tell you it’s about the next generation. I want to open doors for those behind me. I want to give them hope that they can leave Hawaii. They can leave Samoa and make the most of their opportunities.”

Pro Player Insiders caught up with Marcus yesterday in LA to get to know a little more about this humble Hawaiian. Below, we uncover why Mariota doesn’t want to get sacked by Chargers Mant’i Teo, what makes him a Michael Vick + Aaron Rodgers fan,  his favorite collegiate moment, and what being Afakasi (half Samoan , half Caucasian) means to him.

PPI: Who was the first person that contacted you after you were drafted?

Mariota: Well everybody that supported me was with me in Hawaii and that was a special moment that is a memory. I could not say it was one person that contacted me, because to have the support that I have is a blessing.

PPI: When you walked into the Tennessee locker room, who was the first person that had spoken to you and what did they say?

Mariota: The moment for me was surreal! It was a dream to come true and it was a blessing to be there. So many players had come to me, I mean Kendall Wright was somebody that came up to me and congratulated me along with the entire locker room. It is such a great atmosphere and I am very grateful.

PPI: Who did and do you look up to as an NFL Quarterback?

Mariota: Growing up I would say I was a Michael Vick fan! He had made so much exciting plays and was fun to watch! Now I would say Aaron Rodgers in this time, because he is duel threat. He could extend the play with his feet, as well as his arm!

PPI: Has there been a former player or a recent player that has mentored you?

Mariota: My parents! They have been very supportive for what they have given up to help me and my brother accomplish the goals that we have. I am very grateful!

PPI: What is your brother doing right now, you mention him often?

Mariota: He actually graduated high school the other week and will be attending the University of Oregon to play football. We are very excited for what the future may hold for him.

PPI: What is the coolest thing about your brother?

PPI: What makes you so good?

PPI: What does being Afakasi (half Samoan , half Caucasian) mean to you?

Mariota: The values of  Afakasi, (meaning) half Samoan , half Caucasian has done wonders for me, to be honest with you . I was able to learn the Polynesian side of it the culture , the roots, and the humility. Things that drive that Polynesian community.  As well as,  my mom. She has taught me everything, I have had a blend. It’s been a blessing to have all those things. Wherever I go I will carry those traits.

PPI: What is the highlight of your career so far?

Mariota: Winning the power championship (at University of Oregon). Seeing all the hard work from my teammates were something special to see. That was a team goal that we had accomplished.

PPI: Which one of your teammates were drafted and do you still keep in touch with them?

PPI: Who are three people that will be at your games?

And on a lighter note Marcus talks music, fashion, celebrity crush and favorite place to travel…

PPI: What song or artist you listen to pregame or after a game? Have you been to any of his concerts?

PPI: What was the first item you purchased with your NFL check?

Mariota: I have not bought anything yet.

PPI: What is your favorite brand or store that you might wear?

PPI: Who is your celebrity crush?

Mariota: The lead singer from the group the Pussy Cat Dolls, Nicole Scherzinger.

PPI: If you could go anywhere, where would you go?

Mariota: Hawaii, because it is home!

Now that the NFL Players Association’s Rookie Premiere  is over, Marcus will be back to work as starting quarterback in OTAs. Ready to continue the legacy he plans to leave for the Polynesian generations to come.

Follow  @Theresa_ppi and @PlayerInsiders for additional NFL features of what players do on and off the field.

–Fago Franklin contributed to this story.