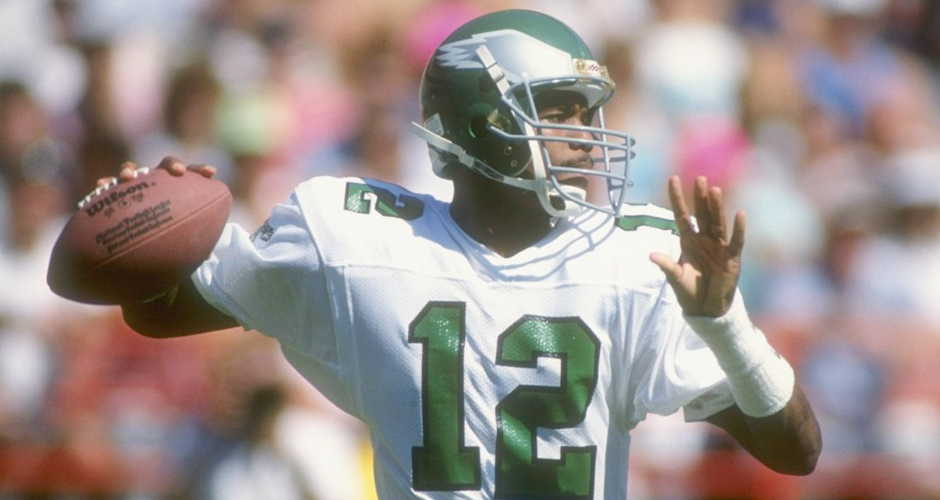 If you grew up in an Eagles family during the mid 80’s to 90’s you were likely to hear the tales of Randall Cunningham and his greatness. Even after he retired from football, it didn’t matter who was playing quarterback for the Eagles, good or bad, they could never compare to what Cunningham could do on the field, at least, according to my family.

But say what you will about Eagles fans, they care about their team. They’re boisterous, and passionate, and very difficult to impress — especially over an extended period of time. Randall Cunningham is one of the few players in Eagles history who was beloved, and left with that reputation intact.

As an athletic force at UNLV, Randall Cunningham threw for 61 touchdowns, ran for nine, kicked field goals, and even punted, at an average of 45.2 yards. In 1985 he was drafted by the Eagles in the 2nd round, with the overall 37 pick.

The young rookie star played sparingly in his first two professional years, behind Ron Jaworski.  Jaworksi left the Eagles in 1987, allowing Cunningham to finally take over the Eagles offense.  Cunningham led the Eagles in both passing and rushing for four straight seasons, from 1987-1990.

Cunningham also holds the record for the longest punt in Eagles history, and fourth longest in NFL history, at 91 yards. Eagles fans were treated to a multitude of highlight reel plays, seemingly every game. The September ’89 Sports Illustrated cover featured Cunningham, dubbing him “The Ultimate Weapon”, a very fitting nickname.

Randall left the Eagles to join the Minnesota Vikings for three seasons starting in 1997, and then the Dallas Cowboys in 2000, and finally wrapping up his career with the Baltimore Ravens in 2001.

Cunningham ended his career with 207 passing touchdowns, coupled with 35 rushing touchdowns, in 160 total games played. There may never be another quarterback quite like Cunningham. There certainly have been others who have been compared to him, such as Michael Vick, Cam Newton, etc, but there is only one “Ultimate Weapon”.

The position of quarterback was forever changed when Cunningham took the field, and there are those still who try to emulate, imitate, and take inspiration from his game, so many years after he has left.

Cunningham has instilled in his children the drive to succeed, and the intelligence on how to take care of one’s body, catapulting them to further heights (no pun intended). Randall Cunningham will always be remembered as an incredibly gifted NFL quarterback, and now he is guiding his children to even greater success in track and field, producing a legacy of which to be proud.