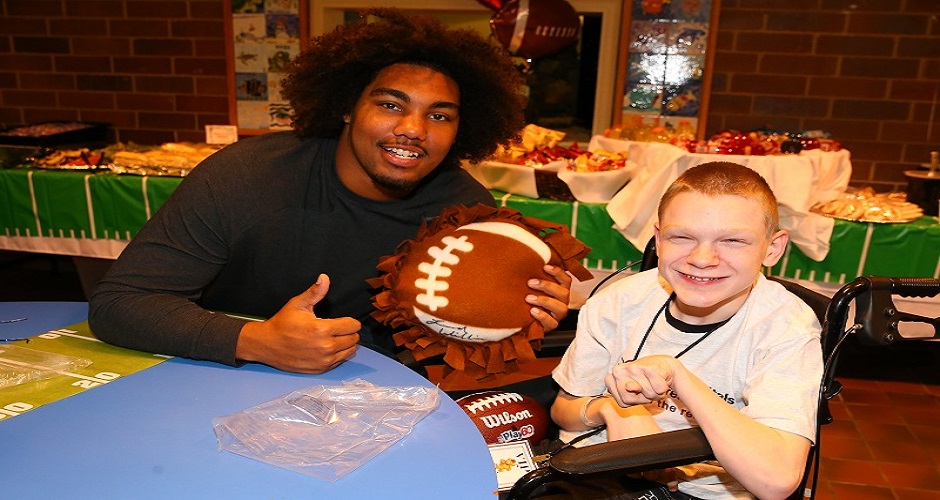 Leonard Williams has much more to offer Jet’s fans as a person than his 6’5, 300 pound build and notoriety as the best player in the 2015 NFL Draft. At first glance, Williams looks like a super human that could take anyone down like he did at USC.  At second glace, everyone notices that this No. 6 overall pick has killer hair.

The NFLPA Rookie Premiere gave us the perfect chance to ask Williams exactly what fans want to know… what’s the story behind the  lion hair?

“I always just grew up growing my hair and then cutting it, and growing it and cutting it. And then it just became a part of my identity just having long hair. I’ve always liked it. Growing up people called me Leo the Lion because it looks like a main, which is exactly where this tattoo came from.”

This defensive end also told us the story behind some of his talent. “I can surf,” Williams chuckled. “My new position coach knows I surf and jokes around about it a lot.  I think I’ve just kind of grew up on a

beach. That’s one thing I’ve always kind of tried out, and I really just got into. Playing at USC and being in California with the bigger waves has made me love it. You use your arms to balance yourself, you can just stand there.”

A surfer with noteworthy hair are only a few things Pro Player Insiders uncovered about the 20 year old. In the interview below we find out about his draft day experience, love for USC fans, life after football, and what Sheldon Richardson said to him when they met.

Pro Player Insiders: You were just drafted and now at the NFLPA Rookie Premiere, have you realized how much has changed in your life? Can you walk us through your draft day?

Pro Player Insiders: You’re in LA this week, which must remind you of the Trojan family love. How have they supported you in leaving early for the draft?

Leonard Williams: They’ve always shown love since my freshman year. They showed it even more in my final years, and they were still supporting me even when I decided to leave a year early. They’re so excited to see another Trojan go in the first round. We haven’t had one in the last two years. It’s kind of unlikely for USC, so I’m glad me and Nelson (Agholor) were able to bring our school back to the top again.

Pro Player Insiders: When you got to the Jet’s facility was there a player that spoke to you first? What did he say?

Leonard Williams: Sheldon Richardson was one of the guys who got one of the bigger impressions on me thus far. The thing I like about him most is he’s pretty young. He’s just like me. He’s at practice joking around, having fun, messing around… but at the same time he’s working hard. When he comes to the sideline or we’re on the field at the same time, he’s always trying to give me little details and tips to help out.

Pro Player Insiders: You have obviously watched a lot of football. Has there been a former player you look up to that you think you game parallels?

Leonard Williams: There’s a lot of great NFL players at my position. It’s hard to name one. But also I don’t really want to model my game after anyone too much because I think everyone’s uniquely different. But one person I really liked to watch growing up was and still is J.J. Watt. The reason I like to watch his film and see how he did it was because when I was at USC, they had me line up all across the defensive line. They did the same thing with him, so I try to watch and pattern how he did it.

Pro Player Insiders: How are you processing being a “pro” now that will get paid to play and if you weren’t playing what career would you choose?

Leonard Williams:  I went to school for business, and one thing I really wanted to do with that was start…one thing I wanted to be when I started playing football was stay engaged with sports somehow. I thought about starting my own training facility like I how trained at Exos for the combine. Something like that where athletes can come in and prepare for the season and offseason.

Pro Player Insiders: There is a USC player out there that has a gym and is in the NFL. Do you know him  Jordan Campbell?

Leonard Williams: I’ve been cool with him for awhile now, ever since Freshman year. He actually allowed us to come to one of his condos in Newport for fourth of July one time. I only know him because one of my best friends Scott Star.

At the end of the day, we all know Williams will have a long, successful career sacking quarterbacks and making plays. But it is also obvious there are many more reasons for Jets Nation to admire “The Lion” and not just for his hair.