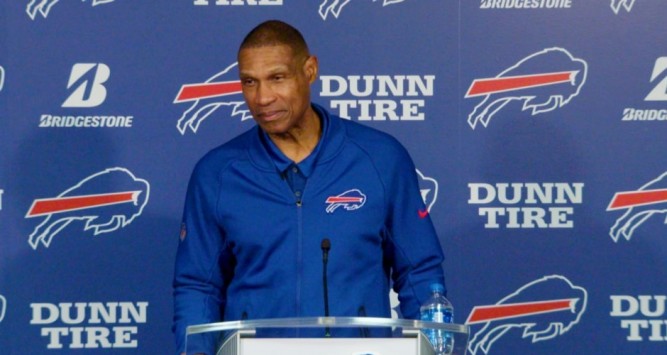 When your defense finishes second overall, but your team fails to make the playoffs, it can be difficult for a coach to think about anything other than jumping right into week one of the next season. For fans, the offseason and preseason can become long, arduous – even pointless at times – but for Buffalo Bills defensive coordinator, Leslie Frazier, the final few weeks of preseason are for fundamentals.

“We’re really focused on just the fundamentals of what we do, trying to improve on our techniques.”, Frazier said. We really haven’t gotten to the point where we’ve started to look at our first opponent yet. Right now, we’re concentrating on ourselves and trying to get better at some of the fundamental things that we’re trying to get good at as we lead to the regular season.”

This Friday Buffalo will play their third preseason game against the Detroit Lions. Typically, week three of the preseason means a lot more playing time for starters, but Frazier still insists it isn’t about the opponent.

“It will be good to see their ones, but even if we don’t it’s more about what I said earlier. Are we improving on the fundamentals on what we do? Are we getting better at our techniques leading up to the regular season, because if we are if we’re holding to the tenants of our defense, running to the ball, forcing takeaways, tackling well, taking good angles and really just being a fundamentally sound defense? That will bode well for us as we go forward.”, says Frazier. “So, whether they play their ones or not, if we see those things on tape that will be really good for us. If they do play their ones, that will be great as well.”

Even with younger guys at the core of the defense, Frazier’s confidence in what the team can do has grown significantly in just his third year.

“It makes a big difference compared to almost three years ago now when we got together for the first time. To sit down and talk to the guys and introduce what we’re doing, now they can actually stand up in front of the room and talk about some of the things that we do, what our philosophy is and how we want to do things. It’s like night and day in that regard and you can see it in how fast they’re playing at this point.”, Frazier continued. “Even, I was thinking about this earlier today, just a year ago this time with Tremaine [Edmunds], his growth and his maturity at this point has helped our defense to be able to play faster, because now you can introduce things without having to say, ‘okay we have to slow it down, we have a rookie middle linebacker, we have to go baby steps.’ Now you can be aggressive with what you’re teaching and how you’re teaching. They can anticipate something that you’re going to say even before you say it. It’s a big deal to have that unity that we do have on defense for sure.”

Another one of those young core guys is rookie defensive tackle, Ed Oliver – who could end up being the steal of this year’s draft after falling to the Bills at the ninth overall pick. It’s not often that a top 10 pick is called a steal, but Oliver could be that good. He’ll be up against lofty expectations, especially being in the shadow of Bills legend, Kyle Williams, but we can assure you that there are no expectations higher than the ones Oliver sets for himself. Head coach, Sean McDermott, commented on how he appreciated Ed’s approach to his craft. Frazier concurred and has also been impressed with the adjustments he’s made in just a short time being a pro.

“One of the things that, I complimented him on this just yesterday, he’s becoming more open to talking with his teammates and integrating with his teammates. There was a period where the wall was kind of up. Your teammates can really help you if you allow them to, especially the veteran guys. He had his guards up for a while, but you can see that guard coming down now and you can see that he’s listening to those guys along with and what his coaches are saying and it’s helping him. So, that’s one area, that means that there’s a comfort level beginning to set in a little bit. The other part of it is that he understands a little bit more about the speed of the pro-game, and how good some of these offensive linemen are compared to what he saw in college football. He’s beginning to make that adjustment. He had a really good week last week against Carolina and he played a good game as well. We’re seeing him make that move and the time is right for that to happen.”

Frazier contributed much of Oliver’s willingness to open up to his teammates genuinely wanting to see Ed succeed. “Nobody is worried about if he’s going to take my position or take all the headlines. Our guys aren’t like that.”, Frazier said. It’s not just a testament to his teammates, but it’s what the Bills Mafia and the entire city of Buffalo is all about – family.