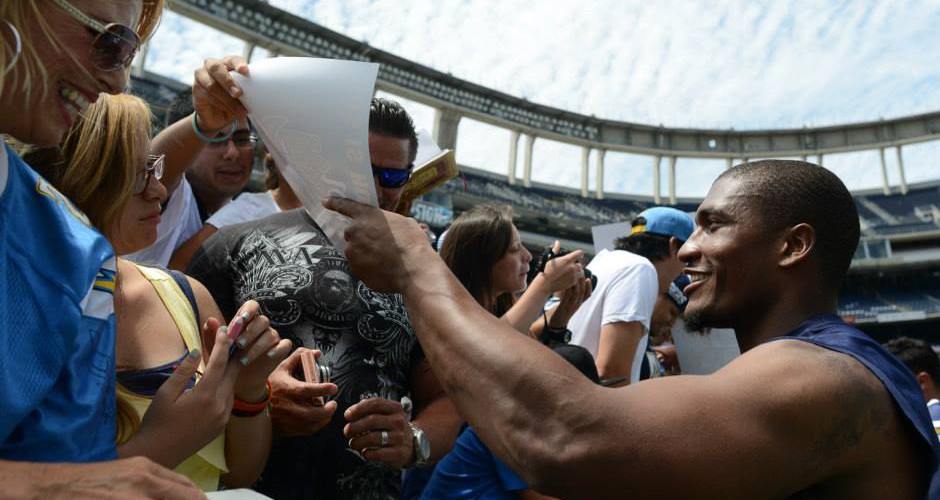 Larry English was very busy this offseason with his foundation efforts. After seeing #52 at Charger’s training camp it was apparent that his focus was also set on preparing for his fifth season in San Diego.  English has finished camp in great shape,and looks determined to make his mark on the field once again.

This season the San Diego line up looks a little different with a new system, new coach, and new players.

If Charger’s fan were able to catch training camp, they saw that #52 has gotten bigger and more explosive with his first step. If he can get an early jump on the defender, than he will create more opportunities for sacks, or better yet fumbles. Both coaches and teammates, have noted that he has shown motivation and determination to be a leader on the defense. As the season is only a couple weeks away, English is more determined then ever to make an impact in the middle of the field on the promising Charger’s defense.

Larry was spotted at Fan Fest and made it clear he has enjoyed the appreciation from the fans. Before he had left practice to celebrate his mother (biggest supporters) birthday, Theresa Villano from Pro Players Insiders had caught up with him to ask him about his first week at Bolts training camp.

LE: We have a bunch of rookies that are doing really well and picking up things really fast. I think that will help us in the future.

PPI: What does it mean to have your mother with you?

LE: I am blessed to have her. Today is actually my mother’s birthday. I am taking her out for dinner. She has been very supportive of me over the years. It’s the least I can do for her on her special day.

Outside of football, Larry has dedicated a good part of his offseason to educating San Diego youth on the importance of being student athletes and leaders. Larry held his first Annual LEAD Foundation football camp in July. Read our coverage HERE

PPI: We were able to cover your foundation camp. With the start of football comes the start of school. What foundation events with the LEAD Foundation will you be doing with Lincoln High School students this season?

LE: Yes, I will be doing more events. As a matter of fact we will begin our mentoring and tutoring program with the student athletes when school starts.

There you have it fans, Larry English will leave his mark on and off the field in 2013.

Catch some of Larry’s teammates supporting him at his LEAD Foundation Events:

Safety Darrell Stuckey Jr. and Devan Walker (rookie from Southeastern Louisiana) have been the encouraging leaders at English Camp.

Rookie teammates Frank Beltre (rookie from Towson University in Maryland) take the mic to interview Tourek Williams (rookie from Florida International and 179th pick in Draft) about the opportunity to play for the Chargers and what it means to help coach at his veteran teammates free football camp at Lincoln High School. Both players jumped on the chance to help the youth in San Diego.

English himself talks about his Foundation: