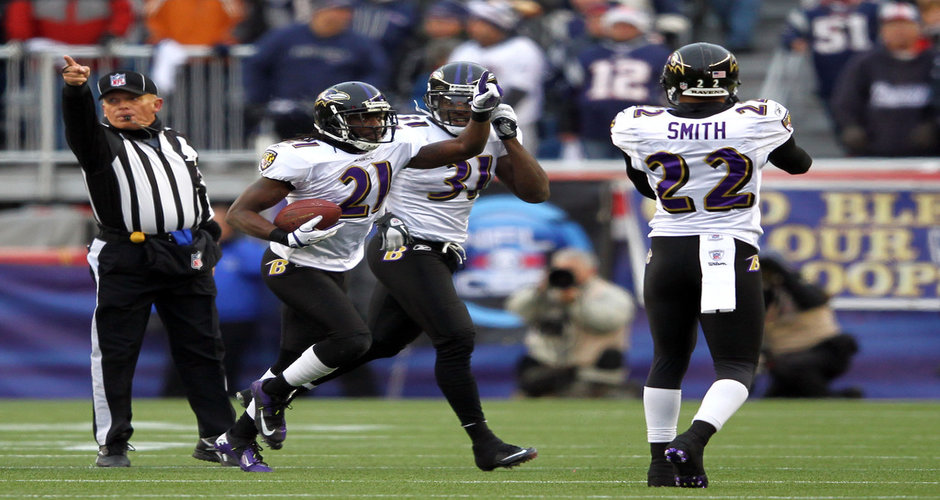 The Baltimore Ravens are putting together a very athletic defense. A strong defense has always been the Ravens calling card. Last year was a season in which they had something to prove, which was that they can still be a good defense without Ray Lewis and Ed Reed. This year there are two players in particular who as a unit have some unfinished business. Jimmy Smith and Lardarius Webb have something to prove.

Webb was once viewed as one of the better young shutdown corners. His breakout season came in 2011 when he had five interceptions and 20 pass break ups. He also had three interceptions in the post season that year. The Ravens rewarded Webb by giving him a six year / $50 million contract, including a $10,000,000 signing bonus, $10,615,000 guaranteed, and an annual average salary of $8,333,333.

Things were looking very good for the young lock down corner, then disaster struck in 2012. The Ravens were in a week six match-up and Webb tore his ACL while he was covering top wide receiver Dez Bryant. Prior to the injury, Webb had one interception and six pass breakups in six games.

He was sidelined as the Ravens made their incredible playoff push and became Super Bowl champions. Webb was on the outside looking in as Ray Lewis and the Ravens put together one final run. The season ended abruptly for him but he worked hard to make his return in 2013.

Last season was kind of a trial season for him as he tried to get back into the groove. Initially, he was trying to build up the strength and restore full trust in his knee. Webb was looking to regain the quick twitch movement that he was able to use prior to his injury. He only had two interceptions last year but he still had a solid season. His 22 pass breakups were actually a career high. Things got better as the season went on for him.

“At first, I was just trying to get the trust back again,” he said. “I couldn’t plant when I wanted to, couldn’t do the things I wanted to do, couldn’t jump. Everything just wasn’t as fast as I wanted it to be. And then, towards the end of the season, it just started coming back natural, as I kept working on it.”

Good things happen to good people. Lardarius Webb recently hosted his annual charity softball game but this time it was at M&T Bank stadium. He also has two youth football summer camps in Alabama and Louisiana.  Webb’s charity events benefit underprivileged children. Some of the proceeds have enabled Webb to  provide over 100 local families with Thanksgiving dinner baskets at the Aberdeen and Webster Kendrick Boys and Girls Clubs.

The 2014 season will serve as a proving ground for Webb. He has a goal of restoring his status as a top defender. His goal should be more attainable since he is more than a year removed from injury. The way that he is able to move around during OTAs and mini camps will play a key role in how much confidence he can have in his knee. So far, everything is looking good according to Webb.

“I am capable of being a lock down cornerback like I am and I’m just ready for the season and will just keep on working. I’m happy to be on the field, running around with no pain.”

He has a cap number of $10,500,000 in 2014 and $11 million in 2015 according to spotrac.com. The Ravens will continue to miss the veteran presence of Ed Reed but they have been able to acquire two young guns at the safety position in Matt Elam and Terrence Brooks. Webb said that he is trying to take on a leadership role in the back end of the defense. A veteran play maker that can be a steadying influence on the younger players in the secondary is exactly what the doctor ordered for the Ravens.

Some scouts had character concerns about Smith when he came out of the University of  Colorado. There were concerns about his maturity and occasional issues with the law. None stood as a true indicator because in the years after that, Smith has been a model citizen throughout his career with the Ravens.

If you look at his background, you will see that  he beat the odds and made it out of a rough neighborhood. Smith grew up in a single story home in Colton, California which is about 60 miles east of Los Angeles. The neighborhood Smith lived in was notoriously bad.

“It’s a rough neighborhood,” said Smith. “A lot of gangs. A lot of gang violence. A lot of people get shot and killed all the time.”

Excelling in football at a young age and continuing to do well is what allowed Smith to punch his ticket out of Colton. He then went on to the University of Colorado and made enough of a name for himself to be a first round draft pick. He wasted no time getting involved in giving back to the community during his rookie season. Smith distributed new bicycles to the youth at the Lansdowne Police Athletic League Center in September of 2011. Smith also has attended the Ravens’ annual women’s event, A Purple Evening at M&T Bank Stadium, the Lardarius Webb Charity Bowling Classic and Ray Lewis’ annual Thanksgiving Distribution.

To date, the biggest play of his career was one that many Ravens fans can vividly replay. That would be the play in which he broke up a pass intended for Michael Crabtree during a 4th down red zone attempt in which the 49ers where looking to score the go ahead touchdown in the Super Bowl.

The 2013 season was the best of Smith’s career. He had two of his four career interceptions and 15 of his 26 career pass break ups. Smith has the ability to be a standout corner. His cap number in 2014 is only $2.37 million. The Ravens elected to exercise the fifth year option on Smith and that will keep him under contract through the 2015 season. His cap number next year will be $6.89 million. When asked about what it meant to  be extended to have his fifth year option picked up Smith said it made him feel that the Ravens like him. He said that he and Lardarius Webb constantly have a fun, friendly competition on who’s the better corner.

Last year was just the beginning of what could be a signature string of seasons in which Smith proves that he was worthy of being a first round pick and worthy of the Ravens signing to a contract extension. The goal for Smith is to establish himself as another one of the top young corners. He surely has the size and ability to do so. Smith said that he has maintained his boxing workout regimen from last year and now weighs 205 pounds. When asked about what it meant to have his fifth year option picked up, Smith simply responded with; “…it means they like me.” Smith also said that he and Lardarius Webb have a friendly competition on who is the top corner constantly.

The arrow is surely pointing up for the Ravens defense. They acquired CJ Mosely, Timmy Jernigan and Terrence Brooks in the draft this year. They will each add athleticism to each level of the defense.  Pair that with a veteran corner that’s looking to prove that he can be lock down corner in Lardarius Webb and a guy that is looking to prove that the franchise should give him a contract extension to keep him around in Jimmy Smith and the result is a young stifling defense.