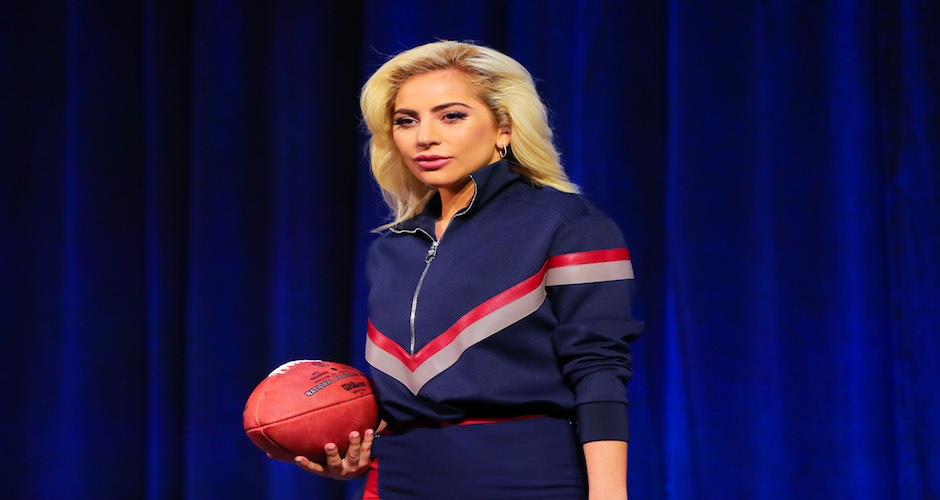 Lady Gaga is known for being a bit eccentric and mysterious. That remained the same at the Super Bowl Halftime press conference where Gaga was very tight lipped about the details of her upcoming performance on Sunday. We didn’t learn much about what to expect but she did offer a few fun tidbits:

The performance will be tremendously athletic: “I want to keep as much of the show as a surprise as possible. I will say it’s a tremendously athletic show and it’s something that we really talked about when creating the halftime experience. I thought it was important for us to consider high adrenaline. When you’re watching football, you’re watching guys crash into each other. You’re watching some real strategizing happening. It’s a pretty intense situation and I didn’t want the halftime show to take a dip. So it’s going to be a good time.”

Gaga considers her special halftime guest Tony Bennett a close friend: “Tony always encourages me to tell the story of the song and to stay grounded in my craft as an artist. My friendship with Tony Bennett is one of the most valuable things to me. He is a tremendously wise man.”

Don’t expect to see Beyonce: Beyonce broke the internet with news that she is expecting twins. However, that didn’t stop reporters from speculating that the Houston singer may also be a surprise halftime guest. “I was actually with Beyonce the last halftime show she did. She’s always very inspiring and gives great advice. She’s a very focused and genuine performer. I’m going to be taking the spirit of many performers with me on that stage when I go up there. I’m grateful to have wonderful women in this business who are supportive of me.”

You can expect to see some familiar stances: “The only statements that I’ll be making during the halftime show are the statements that I’ve been consistently making throughout my career. I believe in compassion for inclusion, I believe in the spirit of equality and the spirit of this country as one of love and compassion and kindness so my performance will uphold those philosophies.”

Gaga has been taking notes from some of the best in the business: “Watching Michael Jackson do the halftime show is one of the fondest memories that I have. He encapsulates everything that you love about a great performer. You watch him go on stage and you can see he’s getting his head into the zone and he’s having a true defining moment. It’s what it must feel like to be a champion.”

There will be no wardrobe malfunctions: “Everything is going to be nice and tight for the game, so I wouldn’t worry about that. Unfortunately, some of you may have been excited for that.”

Lady Gaga may not have revealed many details about her show but there is no doubt that she will deliver an amazing performance if it’s like anything else we’ve seen from her. Terry Bradshaw noted that he is hoping to hear his favorite song “Edge of Glory.” Of course, we will have to wait and see.

We’ll also have to be patient about whether or not she plans on including acrobats. If so, Gymnast Simone Biles offered some advice, “Just have fun, squeeze your body while you’re flying in the air, and remember all the memories.”

Overall, Gaga managed to keep us entertained while keeping most details to herself. In a serious moment, she offered some advice to kids about following their dreams.

“I want young people at home watching the show to know that if you have a dream to be something big, you should go for it. But you have to give it everything you got. You’ve got to wake up and you’ve got to eat it, breathe it, see it every second of the day. And if you do that, you might be lucky enough to wake up one day and be playing in the Super Bowl Halftime Show.”