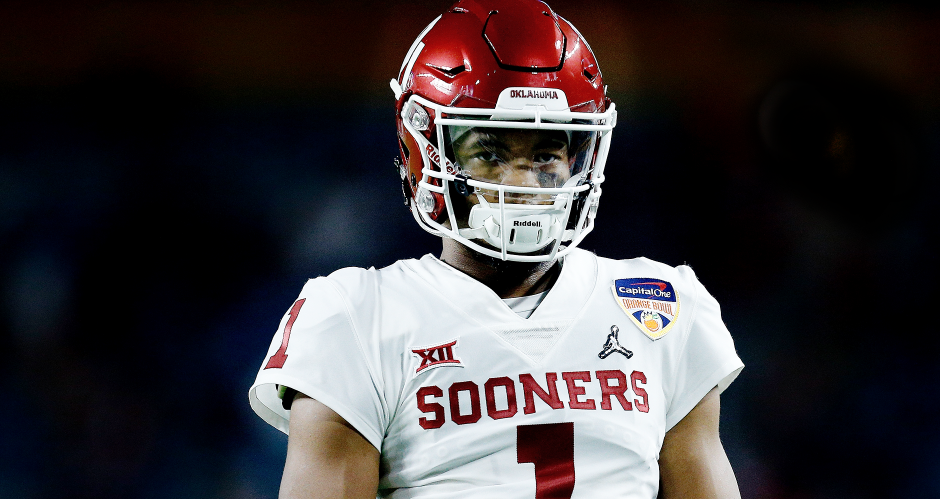 The biggest question heading into the 2019 NFL Scouting Combine has now been answered. Will Kyler Murray participate? Yes, he will. The other question that many wondered has also been answered, what will he focus on, baseball or football? According to a tweet sent out by Murray on Monday, he is all in on football.

It may come as a shock to many that Murray is passing up on his $5 million signing bonus that he received from being drafted 9th overall in the MLB draft by the Oakland A’s. However, for those who have followed his career, this decision is not surprising.

Murray was a highly touted quarterback out of Allen High School in Allen, Texas. Murray is quite possibly the greatest high school quarterback that has every played. He absolutely dominated the highest class of Texas high school football for three years. He won every game he started and led his team to back to back to back state titles.

He was the number one quarterback recruit in ESPN’s rankings and followed in his father’s footsteps to Texas A&M. After an up and down freshman season, he transferred to Oklahoma where he redshirted for a season, and then was Baker Mayfield’s back up for another.

Murray entered the 2018 season with somewhat lofty expectations. Most thought he would preform well, but not be able to match what they had seen from Mayfield the previous season. Murray blew those expectations out of the water.

He led the Sooners to the College Football Playoff and won the Heisman trophy along the way. It had been predetermined heading into the season that he would play this last season for Oklahoma and then join the A’s when spring training started.

Somewhere along the line, Kyler had a change of heart. In all fairness, he never actually said he wasn’t going to play football, or that he would focus just on baseball, it was said by his agent, and many just assumed. What many haven’t realized yet is that Kyler Murray loves football. Most don’t realize he told baseball teams to not draft him out of high school because he would be playing football in college.

Financially, it makes sense to play football as well. If Murray is drafted in the 1st round of the 2019 NFL Draft, his guaranteed money will almost at least double that of what he was set to receive from the A’s. Depending on where he is drafted, it could be a lot more. It only makes sense for Murray to make this decision and to fully commit now so that there is no wavering on will he or wont he.

Next up for Murray is the Combine. What will he measure? Will it matter? Will he do any drills, or just wait until his Pro Day?

The next few weeks and months will answer these questions and be extremely interesting to see just how much his draft stock moves. What we know as of now is Kyler Murray is a football player, and he wants to be an NFL quarterback.