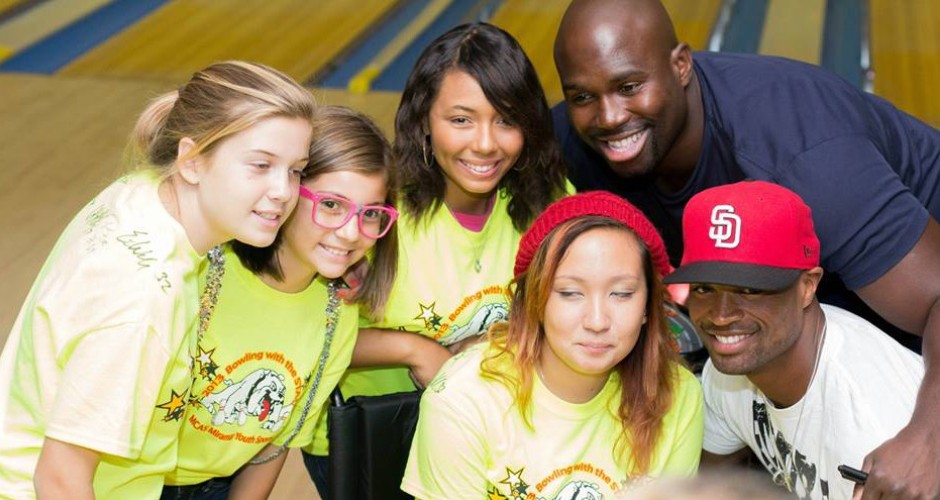 It doesn’t get better then bowing alongside your favorite NFL players.

Current Charger captains Eric Weddle and Darrell Stuckey were joined with former defensive end Jacques Cesaire and tackle Phil Bogle to throw strikes and allow San Diego youth to get to know them off the field. Theresa Villano of Pro Player Insider’s was in attendance and able give the kids a chance to take the mic and interview their favorite Bolts. (*See Top 11 Fun Facts below)

Over 130 children were invited to attend  “Bowling with the Stars” last month at Poway Fun Bowl.

“What brings me here today? Well, it’s the kids opportunity to come have fun and bowl a little bit, I actually have my own ball, but I didn’t bring it today so it feels weird bowling with a different ball, but we are here to help today’s youth and help them raise money for scholarships,” said Stuckey.

“I really appreciate the Chargers coming out here and playing with the kids,” said Curtis Green director and founder of event.

This event has been going on for over 10 years and is stronger than ever. Having fun is their first priority, but there is always a bit of competition in the air. Green went on to say, “The reason it is so successful is because kids just love to play with the current and former players.They actually are real serious about playing because they try their hardest to beat the players. It’s competitive!  It is just a good way for the kids to see the players as real people.”

Theresa Villano of Pro Player Insiders gave the youth participating in “Bowling with the Stars San Diego” a chance to ask candid questions to their favorite Chargers in attendance. Listen to the hilarious interviews done by the kids with Eric Weddle, Phil Bogle, and Jacques Cesaire.

Here are the “Top 11 fun facts” the kids learned  in their interviews about the player participants:

1. Eric Weddle #32  has come to Bowling with the Stars year after year to volunteer his time, sign autographs and throw some strikes. What many don’t know is that Weddle was a special education major at Utah and he tutored students with learning disabilities.

3. Weddle’s favorite player that he has played with is… Jacques Cesaire. Even though Cesaire is not playing now, the former #74 was is Weddle’s  favorite player of all time because of his great leadership.

4. Jacques Cesaire, a 9 year Chargers veteran is known to be a positive role model. Cesaire gave solid advice to the youngsters telling them, “I can’t tell you how to be a professional football player. But I can tell you…if you do really good in school and work really hard, chances are you will do really good in life.”

5. Cesaire also has obvious skills as an interviewer (as pictured below).

6.  Phil Bogle’s favorite player of all time is Ray Lewis, because he is very inspirational to his teammates and his community.

7.  Bogle blocked for LT for two years and he broke the rushing record while he playing with him. LT is also a good friend of  Bogel.

8.  Please note, Bogle got muscular by drinking milk and lifting weights (as pictured below).

9. Darrell Stuckey is an avid bowler. He has his own bowling bowl and holds a game high sore of  220.

10. Stuckey’s favorite food is taco salad; but his wife cooks an awesome pot roast and it’s his favorite meal.

11. Stuckey started playing football in 4th grade but didn’t always want to be a professional football player. He wanted to be an architect because loves to draw houses.

Be sure to follow @DarrellStuckey @pray74 @BIGBOGLE @ to get the latest on what these stars are doing in the community.

Check out more pictures in our BOWLING with the Stars Facebook gallery.
Pictures by David Va