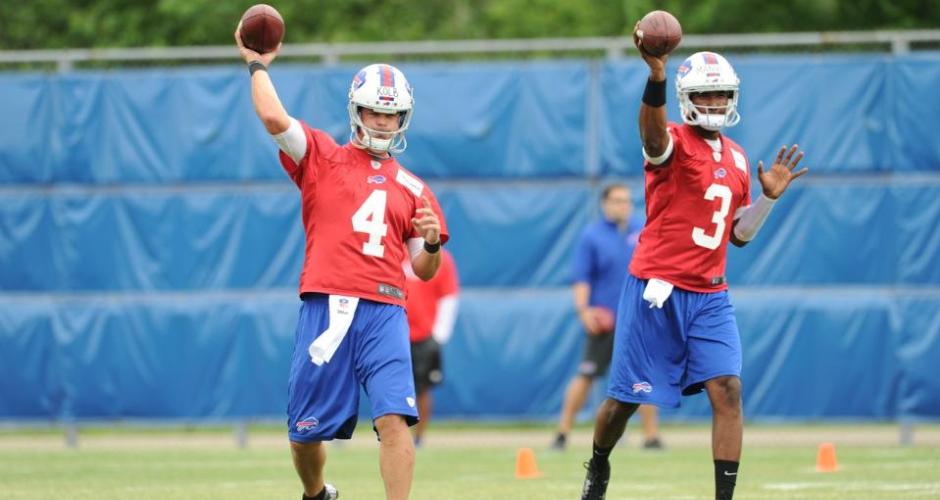 Buffalo Bills quarterback Kevin Kolb is still very much in the running for the starting position as it was announced last night that he will start Buffalo’s second preseason game Friday vs. the Vikings. Kolb had been sidelined with a knee injury that was the result of a freak accident during practice. After practice last night Head Coach Doug Marrone addressed the media about his decision to start Kolb.

“I talked to the quarterbacks today after the walk-through and we’re going to go ahead and start Kevin Kolb at quarterback this week. Just the one thing I hope everyone understands is not to read in to this because we were very, very happy with EJ (Manuel)’s performance in the first game” said Marrone.

This will be Kolb’s first taste of live action and Marrone isn’t putting too much emphasis on having a big game. “I’m just looking for him to play. Play football. Nothing specifically” said Marrone. “I just wanted to make sure he was healthy. I asked him if he was healthy and I said here we go. Obviously it’s a competition and we want to be equal. The same thing, I’m going to repeat it again, I told EJ, it’s not a reflection of how you played, actually it’s the opposite. We felt you played really well for a guy in his first NFL game.”

EJ Manuel put on a very solid performance Sunday against the Colts and it was assumed that he would again start tomorrow even if Kolb was healthy. This decision by Marrone adds more fuel to the fire that is the quarterback competition. Kolb is ready to prove what he can do Friday knowing full well it’s an opportunity to take over the starting job.” It’s obviously a big one. We’ve had a lot of shots. We’ve had shots with OTAs and obviously it picks up and we go from here. I just think, like I’ve told you guys before, you can’t focus on that stuff. You have to focus on as a quarterback, how do I get better and you have to be coachable. That’s a big thing for Nate (Hackett) and our offense. That’s what I’m out here to prove.”

As is the case for most preseason games, how long the starters play is very important. On Sunday, EJ Manuel played the entire first half with the majority of the starters and Marrone is looking to stick to the same plan with Kolb behind center. “I’m going to stick with the same thing. I think the guys that are injured, what our philosophy is we kind of put them on a pitch count, I believe Scott Chandler will get some reps barring anything happening between now and tomorrow night, so you’ll see him in there. So those guys are put on what I call a pitch count. As far as everyone else who’s playing, as I said before I always tell them be ready to play the whole game.”

The Vikings come to Buffalo for the first preseason home game of the 2013 season. The two teams met in last year’s preseason as Minnesota defeated Buffalo 36-14. Christian Ponder will start at quarterback for Minnesota. Both Ponder and Manuel attended Florida State. Manuel backed up Ponder throughout his career and due to Ponder’s injuries in college; Manuel was given many opportunities to play early on in his career.” It’ll be good to see him. I talked to him a few months ago just to say hello and things like that” said Manuel of Ponder.

Once again all eyes will be on the quarterbacks for the Bills second preseason game. Against the Colts on Sunday both EJ Manuel and Jeff Tuel were outstanding, going a combined 35/44 for 319 yards and 3 scores. Kolb is hoping to continue the success along with the two rookies. Kolb’s performance tomorrow could have a major impact in deciding who will be under center for Buffalo this season