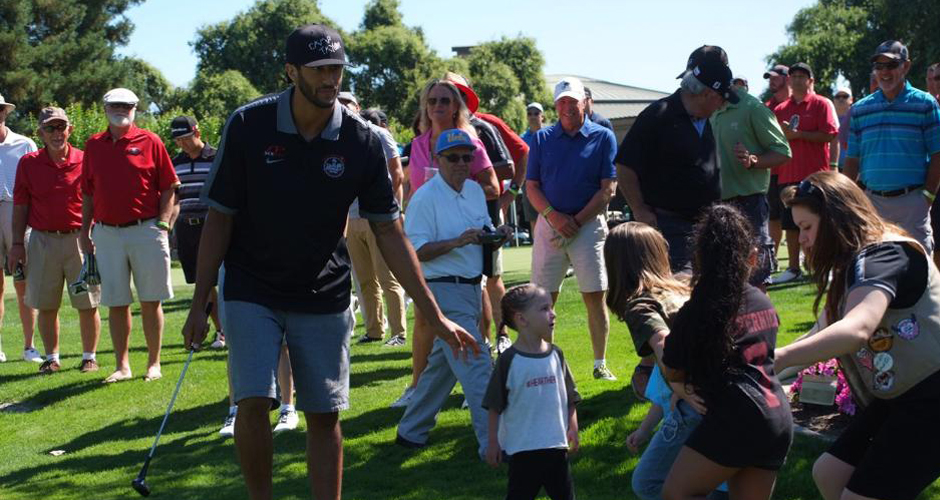 San Francisco 49ers QB Colin Kaepernick was adopted by Rick and Teresa Kaepernick, who had two children but lost two others to heart defects. It was his adopted parents’ heartbreak that eventually led him to partner with Camp Taylor, a nonprofit medically supervised camp for young kids and teens who were born with heart disease. On June 20, the camp presented its fourth annual “Against All Odds” Tournament hosted by Kaepernick.

“I know how much it affected my family, my parents, my brothers and sisters, and how much it affected me,” Kaepernick told the Modesto Bee. “To be able to give back and help families that are in similar situations is amazing for me. I’m very excited, very blessed and very grateful to be a part of it.”

The tournament took place at the Del Rio Country Club in Modesto, California, and featured a round of golf, private dinner and silent auction. The event also saw the kids have a photo-op with the San Francisco QB, as well as perform their own version of the “Everywhere We Go” chant.

In its first three years, this tournament raised approximately $915,000 for programs at Camp Taylor. While Kaepernick was not joined by any of his fellow 49ers family members at this year’s event, he was joined by several friends and relatives, as well as 172 golfers in 43 foursomes, one more foursome than last year’s tournament.

“It gives you that perspective on what’s really important in life, what really means the most and where focus and time should really be spent,” Kaepernick said via the Modesto Bee. “These are kids that from the time they were born were dealt a difficult hand. They’re succeeding. They’re winning. I don’t think you can put a price or a priority above that.”

According to the Centers for Disease Control and Prevention, congenital heart defects, or CHDs, are one of the most common birth defects in the country. They affect 40,000 births — 1 percent — in the United States per year, and they are one of the leading causes of birth defect-associated illness and death.

With nine camp sessions, Camp Taylor helps the underserved population of pediatric cardiology. The nonprofit aims to give a new found self-esteem, education about CHDs and a fun camping experience to the youth who face social and emotional challenges from CHDs.

According to Camp Taylor founder and Executive Director, Kimberlie Gamino, the camp is probably about a year away from moving from its current location in Salida, California, to the former Stanislaus County Honor Farm in Modesto, California.

“We hope to be running camps there next year,” Gamino said. “Colin’s support means a lot to the progress on that.”