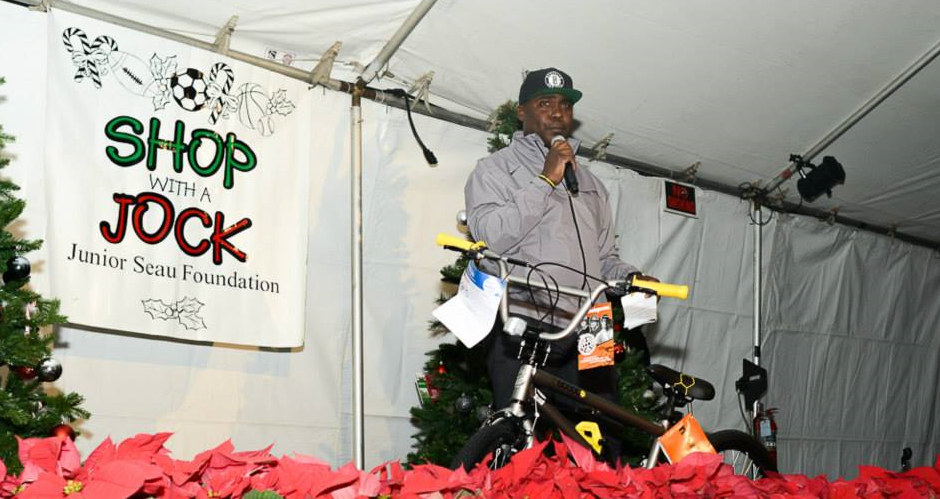 Those who knew him said Junior’s presence was felt in the 19th Annual Shop with a Jock.

“Nobody gave more to his community than Junior Seau. We can thank Junior for this program. I know Junior’s up there right now with a big old smile on his face and he’s going, ‘Buddddddddy,’ ” former San Diego Charger Hank Bauer said.  ” This event changes lives. That’s why guys (local pros) come. They know there are a lot of charities where you don’t directly see the impact. You see it here at Shop with a Jock. It’s tangible.”

On stage  event  co-hosts Bauer and Marshall Faulk  truly brought to life Junior’s mission and spirit. “Junior was my mentor in many ways and I am honored to be here making sure his efforts live on,” Faulk said to the crowd outside of Target in Mission Valley, California.

Seaus’ Foundation and friends are committed to continue the giving legacy Junior established in San Diego. More pros then seen at any other charitable event came to carry on the tradition of Shop with a Jock. Chargers players came deep to show support including: Corey Liuget, Donald Butler,Melvin Ingram, Jarrett Johnson, Thomas Keiser, Mike Scifres, Adrian Robinson, Manti Te’o and former players such as Jacques Cesaire, Dave Binn, Hank Bauer, Darren Bennett. In addition to the Bolts, the Padres, UCSD Aztecs,  and local sports heroes like NBA legend Bill Walton all showed up to help 250 children from local Boys and Girls Clubs shop for gifts. Each attendee got to spend priceless time with the athletes in attendance, as well as, receive a $100 gift card to shop at Target for their family.

Theresa Villano, of Pro Player Insiders, was not only able to catch up with Bauer, but also the other supporting pros to talk about Junior and their personal holiday traditions. Below are in depth interviews with Manti Te’o , Hall of Famer Dermontti Dawson and Padres star Trevor Hoffman that capture the essence of the Shop with a Jock program.

Bauer holds the NFL single season record for most special teams tackles with 52. He does Chargers radio broadcasts on FM105.3 and AM1360 in San Diego.

Pro Player Insiders: This is the 19th annual Shop with a Jock. Wow, you’ve been here 19 years. What makes this event so special, Hank?

Hank Bauer: This is Christmas. This is one of the things that has a really tangible effect on kids. There are 250 kids here tonight. Each of them are going to get a $100 gift card.

They go in to Target and they are going to learn what Christmas is all about. That is giving and buying for somebody. They wouldn’t have this kind of money. These kids come from all over the area and it’s a first time that they can actually learn the most important lesson. Christmas is about giving. It’s about, not yourself, not doing things for yourself. We’re going to take them in there and they’re going to take gifts home to their families.

PPI: Why do so many athletes come out here?

HB: Just because. You know what? Look around. It’s great to see Bill Walton here, Trevor Hoffman and Dermontti Dawson. All of these guys are hall-of-famers. The Chargers, the Padres, the student athletes are here to say “life is great, but it’s nothing if you can’t give.” Most of these guys, believe it or not, did not have a whole lot growing up either. I know, I didn’t. If I was a kid and I got an opportunity like this I would be thrilled. Kids walk out with smiles on their faces and that never leaves these guys. I don’t care if you’re Bill Walton or Marshall Faulk or Trevor Hoffman, that’s impacting.

PPI: Speaking of growing up, before you go, I want to know your favorite toy that you ever received on Christmas?

HB: Wow. The first gift I ever got…well, I wanted to be a baseball player. When I was five years old. I got a baseball glove. I’ll never forget it. Biggest thing in my life.

PPI: Lastly, is there a Bauer holiday family tradition that you would do every year?

He is the second linebacker of Polynesian descent to play for the Chargers after Junior Seau, being drafted with the 38th overall in the 2013 NFL Draft. He played college football for the University of Notre Dame, was recognized as a consensus All-American, received eight national awards and became one of the most decorated college football players of all time.

PPI: We’re here at Junior’s annual event and a lot of people compare you with him. What does it mean to be at his event, living his legacy?

PPI: What was your favorite toy you ever got for Christmas?

PPI: What is a Te’o family holiday tradition?

MT: Everybody just gets pixies. You know, we all draw each other’s names. Whoever you draw, you have to go buy a gift for. That’s something that we always do. This Christmas is going to be a little different. They’re coming up here for Christmas, so we’ll see how it goes.

Dawson played his entire career with the Pittsburgh Steelers, was a 7x Pro Bowler, and was elected to the Pro Football Hall of Fame in 2012.

PPI: What brings you back here to Shop with A Jock year after Year?

Dermontti Dawson: I just want to be part of the Junior Seau Foundation. It’s great for us to come out here and be with the kids. We get a chance to interact with the youth and help them shop for their siblings, their parents, and they get the biggest thrill. Once they find out what team that some of these guys play for, we start signing shirts and it’s just a great event.

PPI: Growing up, what was your favorite gift you ever received, Mr. Dawson?

DD: My favorite gift that I received growing up was a whirly bird. It was a helicopter, which kind of went in a circle and you had a remote control. You could sit there and make it spin and you could pick up certain items and objects. I don’t know if they even still make them, but it was a pretty neat little contraption. Also, my first bike was a memorable toy.

PPI: Is there a holiday tradition in your family?

DD: We really don’t have a tradition. Well, I guess one tradition, like most families, a big dinner. Of course we celebrate Christmas at home first. Then from there, we kind of branch out and go to everybody else’s homes. But no matter what we have a good Christmas dinner.

PPI: Awesome and who are you standing next to? The famous Sports Illustrated Jim Trotter?

DD: Yes, Mr. Jim Trotter. He always gives back and he is always giving me a hard time playing golf (chuckles).

Hoffman played 18 years in the MLB and is known as a long-time closer. He was the major leagues’ first player to reach the 500- and 600-save milestones, and was the all-time saves leader from 2006 until 2011.

PPI: We don’t just cover football. We cover amazing baseball players with good hair, like Mr. Hoffman. You’re shopping with a jock today. What does it mean first for you to be here?

Trevor Hoffman: Well, first of all, it was wonderful to get these two young ladies and to hear their excitement for picking stuff for their grandmothers and their siblings. It really kind of puts into perspective what Junior was thinking about. It’s the time of giving. As much as you’re going to receive during the holiday season, being able to give back to your family is something that you’ll always remember.

PPI: Speaking of giving back, I’m going to let the kids ask some holiday questions.

Student Participant: What family holiday tradition do you have?

TH: One of our family traditions is we’ll sit at the kitchen table or we’ll sit at the dining room table and we’ll have a box that’s wrapped up with something inside it. It could be double wrapped. It could be triple wrapped with bows. Everybody gets to fiddle with it for a little bit as it goes around the table. At the end of the dinner, we all get to guess what we think is in the box. Whoever gets it right obviously gets the prize inside. Sometimes it’s a blooper. Sometimes it’s something nice. It’s kind of a cool tradition that everybody gets involved in.

Student Participant: If there was one person that you could get a gift for that’s important to you, who would it be?

TH: Solid question. You know, if there’s one person I could give a gift to, it would be my father. My father’s been gone since Super Bowl 1995 when the Chargers were defeated by the 49ers. Losing my dad was a big part of my life, but to be able to maybe just have the gift of having him around for one more day to tell him I love him and I miss him. To tell him he did a wonderful job raising us would be the greatest gift.

Shepard has lead the No.24 Aztecs to a 7-1 record this season. Shepard was the No. 53rd ranked recruit for the 2012 class, according to ESPN and also on ESPN.com Myron Medcalf’s list of Top 10 Impact Sophomores.

Pro Player Insiders: We’re with the shooting guard of San Diego State University. The Aztecs are king here in San Diego. Tell me what it means for you to be here at Shop with a Jock.

Winston Shepard: It means a lot for me to be here. I come from the inner city where I know what it means to give back. I know how it helps people and can brighten someone’s day. I’m all for it.

PPI: What did you buy today ?

Student Participant: Well, my name is Kaitlin Minyez and I go to Lakeside Middle School.A couple of stuff for my family with Winston’s help.

PPI: What does it mean to have Winston helping you buy things for maybe the guys in your life?
Student Participant: It means a lot because I can finally have someone with me to give me ideas and he can take time out of his day just to come over.

PPI: Winston, what is your favorite holiday tradition with your family?

WS: I’m from Texas and my favorite holiday is Christmas. I used to stay up. I could never sleep and couldn’t wait to open my gifts. I love Christmas and I’m glad to be here to help.

PPI: What was your favorite toy growing up? The gift that stood out the most?

WS: Well, when I first got a PlayStation, I remember being happy. The first game I played was NBA Live 1999.

For more event photos checkout our 2013 Shop with A Jock Facebook Album.

For more on the Junior Seau Foundation visit:  http://juniorseau.org/ 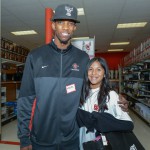 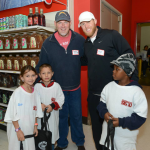 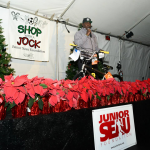 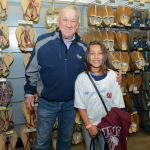 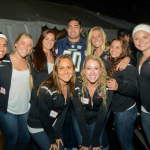 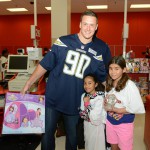 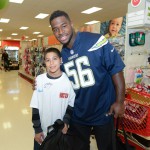 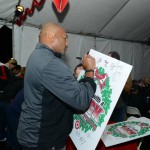 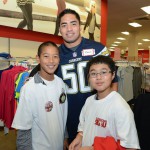 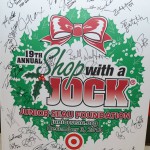 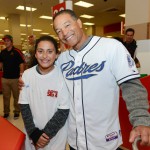 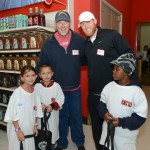 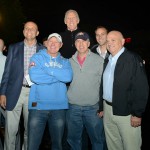 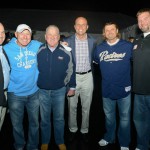 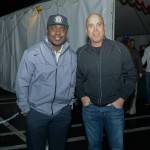 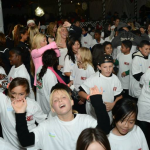 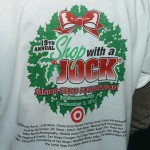 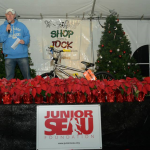 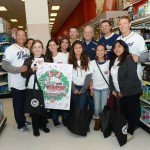 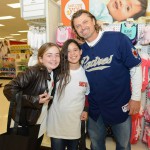