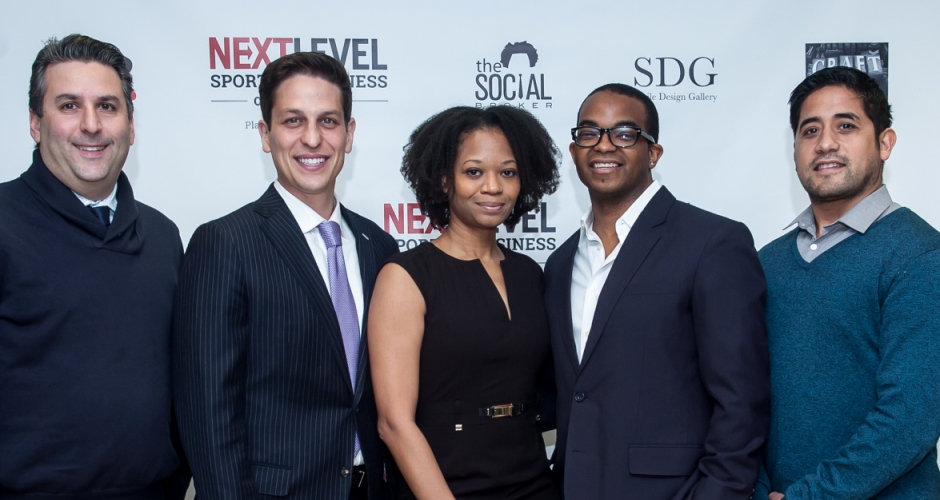 The conference included two sessions in which two separate panels discussed issues. The first panel highlighted some of the struggles that former NFL players face from concussions. It was an eye opening experience because many don’t realize the every day struggle that some of these former players go through. Fortunately, the word is getting out about this issue and there are more organizations working to help prevent future cases.

The second session was a Branding and Wealth Workshop. The panel focused on ways that players could leverage their elite status as NFL athletes into post career success. Many unfortunately don’t take advantage or try to do so too late.

Jude Waddy, a former linebacker for the Green Bay Packers spoke to me about his story. He was one game away from being vested. This would mean that he would receive pension from the NFL. Unfortunately, Waddy was injured in the pre-season and was released by the Packers. If he was on the roster for that first regular season game, things would be a bit different for him today.

“As an NFL athlete, their are rules and regulations. Once you get four years and a certain of number of games, you get vested and become eligible for pension. You get certain protection that isn’t available to those that don’t reach that point. A lot of us get right to that point, right to the cusp. We get right to one or two games away and we get cut. No other team wants to pick you up because if you get that game with another team, that team now has to pay for your pension. It’s a rough, rough situation. Salaries aren’t guaranteed and that is something that would help those of us after football. I would love to have gotten the opportunity to get a pension but that just didn’t happen.”

Waddy also told us how injuries that he sustained have affected him post career. He said that he can tell when the weather is changing from the ache in his bones. He also told me how sometimes he will be at a loss of words or see someone that he knows and their name will be at the tip of his tongue but he just can’t remember. This is something that he has to overcome in his professional life after football. Waddy sells expensive medical equipment. He joked about having to go into a facility and forgetting the contact person’s name but still having to work through it and pitch a $300,000 piece of equipment to them.

The true athlete in Waddy came out when he told me that he works to “make his weaknesses a strong point.” He pointed to Rob Davis, a former long snapper and teammate on the Packers as the one who helped him realize the importance of post career planning. Davis is now in the Packers player personnel department. He used to attend seminars about speaking engagements and public speaking in the off season. Davis was making money going to speak at different events and sharing his story. That was what made Waddy realize that there are qualities that he had as an athlete help him be successful as a business person.

The conference concluded with an awards ceremony that honored Don Coleman, a former linebacker for the New Orleans Saints and New York Jets. Coleman is the founder of Global Hue which is one of the world’s largest multicultural advertising agencies.  He told Pro Player Insiders what made him able to be so successful after football.

“You have to live a life outside of football, meaning that you are reading and understanding things going on outside of football, you have to know that you can only play for so many years. I learned that early on when I got a scholarship to school. I wasn’t thinking about playing pro ball, it just happened. I understood that just because I got a scholarship, it didn’t mean that I was going to the pros.”

He was actually a journalism major at Michigan and accepted a job with an advertising company and kept his contacts as he played football. Coleman suffered a knee injury that ended his career. He wanted to write for Sports Illustrated but learned more about advertising and found more of an interest in that. Soon after, the entrepreneur in him came to the surface but he didn’t know how to get his foot in the door. He worked a smaller agency in Chicago for three years and really learned the business.

“I was trained corporately but not as an entrepreneur. I went from a Chevrolet account that was the largest in the world to a smaller agency but it was the largest minority agency and then I opened up my own place. We only had 500 square feet and some bricks. I had to step back to move forward. Most people don’t want to do that because they establish a lifestyle and can’t afford to do that. I knew how to invest my money and spend my money so when the time came, I could make a move.”

The preparation paid off in a huge way. In talking to him, it seemed like becoming a professional athlete was easier than achieving the post career success that he is enjoying now. Coleman said that he was a gifted as an athlete. However, he cited his industry as one of the more difficult ones for minorities and how he has to take on the competition of the large conglomerate agencies.

Above all else, Coleman understands the importance of giving back. He established an scholarship that gives $50,000 to five different aspiring entrepreneurs. “I know how difficult it is for students to pay for tuition. The grants aren’t there like they used to be. The economy has made it tough. Money has dried up. My motivation was that if I can help a person who wants to be an entrepreneur do so, they will help others. I thought that if I help others become successful, they’ll do the same and we can all help make society better.”

This conference was the first of many more to come. There was plenty of information that would be of benefit to former athletes, current athletes and even everyday people. For more information please visit their website: www.nlsbg.com