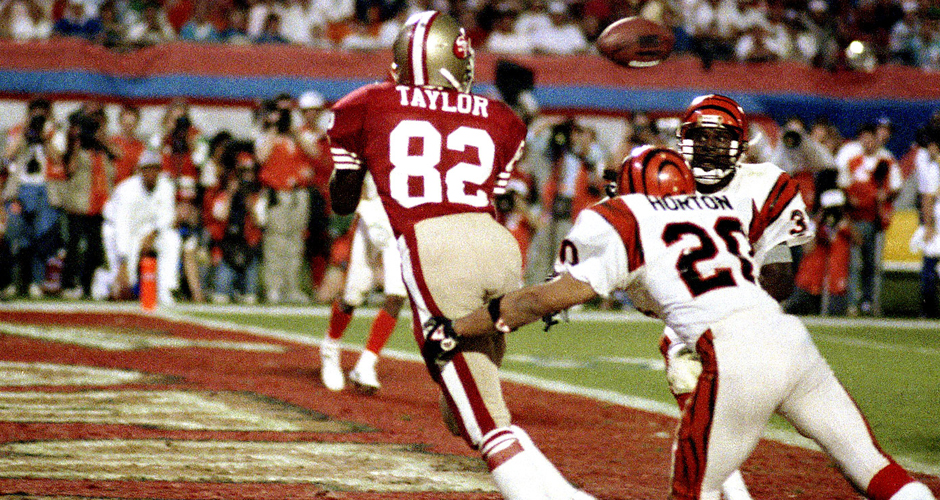 It was the end of the 1988 NFL season, and the San Francisco 49ers were doing battle with the Cincinnati Bengals at Super Bowl XXIII. In a matchup that was evenly tight throughout the whole game. San Francisco got the ball on their own eight-yard line with 3:10 left on the clock. By the time there was less than a minute left in the game, the team had driven 92 yards down the field. With 34 seconds left to go, the ball left QB Joe Montana’s hands and landed in those of John Taylor — Taylor just scored the game-winning touchdown for his team.

During his playing days, while he had attention for what he did on the field, Taylor barely said a word to the media. It was a vow he made himself.

“The press had written that I was suspended for drugs and alcohol when I had not even been asked about it and when they didn’t even know the full story,” Taylor said. “Nobody bothered to dig and find out. They just wrote what they thought. Sure, it hurt me, but it hurt my family even more. Especially my mom. And less than a year later, she died. I blamed myself for it. I shouldn’t have had her out there in that sun. I blamed them for it. She went to her grave never knowing the full truth. I promised myself I would never forgive them for that.”

Taylor said the relationship he had with his mom was one of, if not the absolute, strongest that has ever influenced him. But one day in the summer of 1989, Taylor’s world was rocked to its core.

“For the Fourth of July weekend in 1989, me and Elaine [Taylor’s wife] packed and got ready to go to my family’s home,” he said. “I had put a suit in the suitcase, and I remember thinking after leaving, now why did I do that? I won’t need a suit. This isn’t a business trip, this is strictly for fun with my family. We got there and most of the family on the Fourth went to Great Adventure. We were having a great time.

“Then, my mom said she didn’t feel good. She said her head was hurting. My mom had diabetes and we thought she just needed insulin. It turned out she had a brain aneurysm and the vessel had busted. We called first aide. She was rushed to the hospital and did not come out of a coma for four days. Then she died. I think of my mom all of the time. I wish I could talk to her. But I’ve learned: Life in general is a script, and when you fulfill that script, the Lord calls you home.”

Taylor said he eventually realized the media were not to blame for his mother’s death; doctors informed him his mother’s aneurysm had gone undetected, so it could have struck at any time possible. But Taylor did not bother to change his relationship with the media, invoking the philosophy of “If it ain’t broke, don’t fix it.”

But in time, Taylor grew maturely and spiritually, all thanks to the loved ones around him.

“My dad, his name is John, too, he has always been there for me, for all of us, working two jobs including at the post office and giving us everything we needed,” Taylor said. “He even bought each one of us cars when we got to high school. I seek his advice. I love my dad.

“I love my wife. She has a master’s degree in education. We talked on the phone for three months before we actually met and we married in 1990. I’ve leaned on her shoulders. She’s been there. I thank God. If it wasn’t for her…I don’t know what traps I might have fallen into.”

“When I finally did meet him, I was expecting the TV version of a football player, the gold chains and the glitz and glamour,” she said. “I’m a down-home girl. And I found out he was the same way, a down-home guy. I’m five years older than John. There was a maturity difference. I was goal-oriented from the start. He was kind of haphazard, kind of happy to be a 49er and that was it. He was your typical young man in his 20s searching.”

After Taylor hung up his cleats, he created a product transportation company called J.T. Taylor Trucking Inc. in 1998. Starting with five drivers, he downsized and became a driver, too.

“I knew trucking before I knew football,” Taylor told ESPN. “My grandfather and all of my uncles drove, so I grew up around it.”

Looking back at his life’s journey from before and during football to the end of his playing days, Taylor said he is happy with the man he evolved into.

“I feel good about myself,” he said. “And if you feel good about yourself and you’re doing your job the best you can and you have people, family, that you love and that love you, what more is there and what more can you ask for? I’ve learned to stand for something. And not to fall for anything.”
Follow us on Twitter @playerinsiders @thomasjalbano