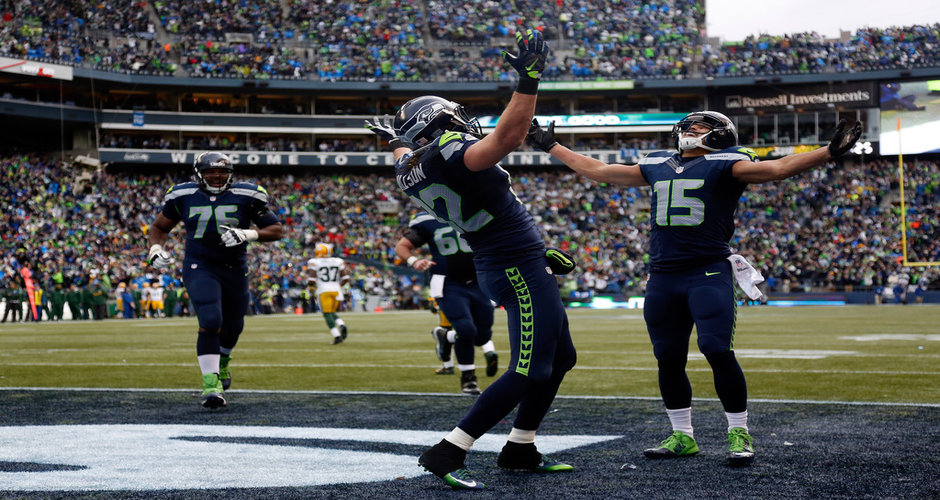 Seattle Seahawks wide receiver Jermaine Kearse had a nightmare of a game up until his game-winning catch. He rebounded in overtime when he got behind the Green Bay Packers defense to secure a 35 yard game-winning touchdown catch as the Seahawks beat the Packers 28-22 at CenturyLink Field in the NFC Championship game.

Kearse didn’t have a catch prior to his game-winning score. But the big story prior to the catch as far as he was concerned, was the fact that Wilson aimed four passes his way (two in the first half and two in the second half) and each of those passes were intercepted. When Kearse almost came to tears after the game it was understandable considering all he went through.

The Seahawks who will be looking to repeat as Super Bowl champions when they face the winner of today’s AFC Championship game between the Indianapolis Colts and the New England Patriots, only led this game once before that Kearse touchdown reception in Overtime.

The keys to this game for the Seahawks was that they refused to give up, they followed the cool and composed nature of their leader and quarterback Russell Wilson (14 of 29 for 209 yards, 1 touchdown and 4 interceptions), and they kept Packers quarterback Aaron Rodgers from really picking them apart on a consistent basis; which included no touchdown passes by the passer in the second half. Rodgers finished 19 of 34 for 178 yards, 1 touchdown pass and 2 interceptions.

Packers kicker Mason Crosby converted his second field goal of the game from a short distance, with his latest one from 19 yards which gave his team a 6-0 lead with 5:07 left in the first quarter.

The Packers’ first three drives of the game ended with field goals (2) and an interception by Seahawks cornerback Richard Sherman interception. So, one can imagine the happiness the Packers had when they finally got into the end zone. The highlights of this fourth drive, was a Richard Rodgers down the middle 11 yard reception to the SEA 18 and a block by rookie receiver Davante Adams on Seattle strong safety Kam Chancellor, in which Adams knocked the safety clear off his feet for the benefit of one of Green Bay’s ball carriers.

Those plays set up a back of the end zone 13 yard touchdown strike to wide receiver Randall Cobb (7 catches for 62 yards and 1 score). The Packers went up 13-0 near the tail end of the first quarter. Cobb who had the highest percentage (73.3%) of thrown-at to reception ratio of any wide receiver on the Packers team coming into today’s game, helped his team quiet or at least tame the Seattle crowd with that touchdown catch.

Rookie Packers safety Ha Ha Clinton-Dix intercepted his second pass of the game, when Wilson threw deep down field for his receiver Jermaine Kearse, but Clinton-Dix stepped in front of the receiver at the GB 32 and returned the theft 27 yards to the SEA 41 yard line. An illegal blow to the head block by Packers linebacker Clay Matthews on Wilson during Clinton-Dix’s interception return, put the ball back at the GB 44.

Three plays later, Seattle’s Byron Maxwell got the ball right back for his team, when he intercepted a Rodgers pass near the right sideline at the SEA 31 that he ended up returning 5 yards to the SEA 36 yard line. Maxwell’s theft led to a big 3rd down and 7 from the GB 34 over the middle completion to receiver Ricardo Lockette. The promising drive died a cruel death, when Packers cornerback Sam Shields intercepted Wilson near the left corner of the end zone on a pass intended for Kearse.

Shields’ touchback interception led to a 3rd and 10 Rodgers incompletion down the right sideline, that was intended for Cobb. Seeing how dangerous Seattle is in the red zone or inside the 20 yard line, that Shields interception did the Packers much good and no harm (Rodgers 3rd down incompletion notwithstanding).

On the Seahawks’ second drive of the second half and down 16-0, it was time for the Seahawks to get it together. On 3rd and 19 from the GB 48, Wilson with all day to throw, completed a 29 yard pass to receiver Doug Baldwin (6 catches for 106 yards and no score) who leaped in the air and caught the pass and finally he was then pushed/tackled to the GB 19. At that point in the game, that reception gave the Seahawks a HUGE boost.

But that Baldwin reception wasn’t even the biggest play of the drive. On 4th and 10 from the GB 19, the Seahawks played it off like they were going to try a 38 yard field goal. Punter Jon Ryan received the snap from long snapper Clint Gresham, the punter then got up from his knee and ran forward for a few yards, and then threw a desperate pass to the back of the end zone that second-string right tackle Garry Gilliam caught. That huge gamble of a play cut the Packers lead to 16-7 with 4:44 left in the third quarter.

Later in the third quarter, the Seahawks dodged a bullet when they held a driving Packers to just a 48 yard field goal from Crosby. The Packers took a 19-7 lead with 10:53 left.

With 6:53 left in the game, the Packers took over at their own 13 after a big defensive stop on third down and a subsequent Ryan punt. The drive died when Rodgers threw an incompletion in the flat to tight Andrew Quarless who was defended with superb coverage by Seahawks outside linebacker K.J. Wright.

Late in the fourth quarter Packers strong safety Morgan Burnett gave his team their fourth interception of the game, when he caught a pass that Kearse tipped in mid air near the GB 40. Burnett returned the theft 4 yards to the GB 39. But the Packers didn’t get any points out of Burnett’s gift when they went three and out on their ensuing drive.

The Seahawks took advantage of that Packers three and out by securing a Baldwin 20 yard reception to the GB 35 and then a huge Marshawn Lynch (183 total yards and 1 score) 26 yard reception down the right sideline to the GB 9 yard line. That play set up a pivotal and crucial 1 yard quarterback sneak into the end zone by Wilson. Suddenly after all seemed lost, the Packers lead was cut to 19-14 with 2:08 left in the game.

On the ensuing kickoff Steven Hauschka of the Seahawks, executed an onside kick that was recovered at the 50 yard line by backup wide receiver Chris Matthews. What a turn of events in the last four minutes and change of this game. It seemed near the five minute mark of the fourth quarter that the Packers were going to Super Bowl XLIX, then luck and planning by Seattle ruined those hopes.

Matthews’ recovery led to a Lynch untouched 24 yard touchdown run down the left side to give his team an eventual 22-19 lead, after an unbelievable two-point conversion reception by tight end Luke Willson. On the play, Willson fought with Clinton-Dix in the end zone for the pass and then he eventually snatched the ball which drove him out of the end zone, and finally he went back into the end zone to complete the play.

On the ensuing drive, the Packers came back at the end of the drive and secured a successful 48 yard field goal by Crosby to tie the game at 22-22 near the tail end of the game.

The man who had four passes aimed his way with all four of them ending up in interceptions, Kearse was the unlikely recipient of the game-winning play. But Kearse beat deep coverage by Packers cornerback Tramon Williams and secured a 35 yard touchdown pass from Wilson to win the game 28-22.