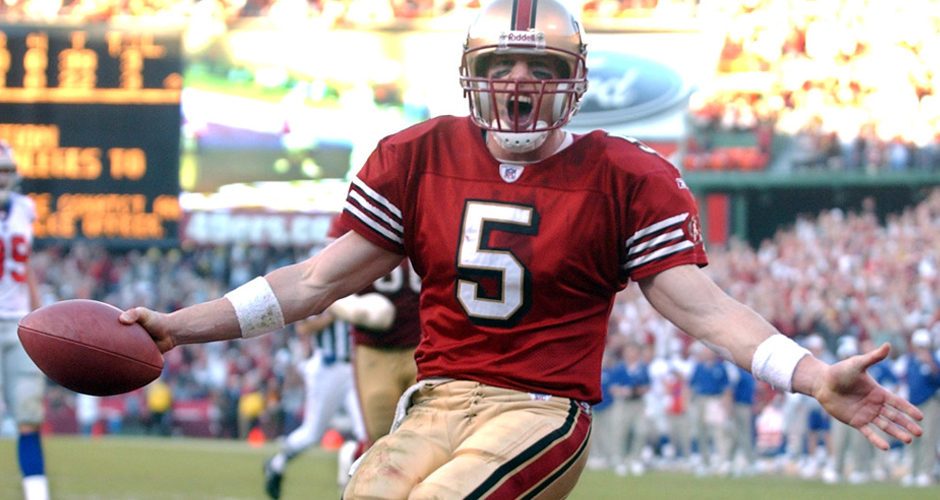 It’s every sports fan’s favorite narrative.  The story of a player who flies under the radar until that one breakout moment when the world is watching.  Right around the turn of the century, the San Francisco 49ers franchise casted a talented underdog in QB Jeff Garcia as their main character.

Unlike most quarterbacks who get the chance to play in the NFL, Garcia had to forge his own path to get his shot. Garcia was a standout high school player in the Santa Clara area with his sights set on playing college football.  Despite racking up records and accolades, he was under-recruited and ultimately decided to attend local Galivan Community College in hopes of eventually ending a bigger program.  After one terrific season which saw Garcia named a Junior College All American, he saw his plan through and transferred to San Jose State.  Jeff Garcia had a magical career at San Jose State, and still holds the school record for career offensive yards (7,274).

Garcia attributes much of his eventual success to his days as a San Jose State Spartan.  As a token of his appreciation for the university that provided him with the exposure he needed, he has been very active as an alumnus, funding the school’s Jeff Garcia Hall of Champions.  San Jose State notes that “Through the generosity of Jeff Garcia, great athletes and teams of the past, present and future are forever recognized. It reminds us of our proud history and accomplishments and at the same time memorializes a favorite son who grew up in the area, played football and got his degree from San Jose State, and became a NFL player.”

Standing at 6’1”, 195 lbs. as a college senior, Garcia was deemed too small to be an NFL quarterback and was subsequently snubbed in the 1994 Draft.  Bill Walsh, three time Super Bowl Champion coach of the San Francisco 49ers and coach at Stanford University during Garcia’s college days, said that “he almost beat us by himself.”  And after noticing that he went undrafted, Walsh made some calls on Garcia’s behalf to NFL and CFL teams.  He was the reason Garcia signed with the Calgary Stampeders of the Canadian Football League just a few months later.  He entered his first season in Calgary as the third string backup quarterback behind former Boston College standout Doug Flutie. When Flutie went down with an elbow injury during the 1995 campaign, Garcia became the starter and quickly impressed. After Flutie left Calgary to sign a free agent contract with the Toronto Argonauts in 1996, it was Garcia’s time to shine.  He went on to lead the Calgary Stampeders to three consecutive winning seasons and a Grey Cup Championship victory in 1998.

NFL teams finally took notice of his incredible results, as Jeff Garcia signed a deal with the San Fransisco 49ers to become Steve Young’s backup quarterback.  When Young suffered his final concussion early in the 1999 season, Garcia’s dream of being an NFL quarterback was now within reaching grasp.

The rookie struggled his first few games and was forced to watch the middle part of the season from the sideline.  With five games remaining, he was given another chance and this one he would not squander.  He regained his confidence and responded to the challenge of leading a losing team.  Garcia finished the season with eight touchdowns and just two interceptions. Garcia’s heroics created a buzz around the 49ers that the fans did not think they would ever feel again following the injury of  their beloved Hall of Famer Steve Young.

Garcia carried his great play on the field into the next few seasons,making three straight Pro Bowls and two playoff berths.  He set the 49ers team record for passing yards in a single season with an incredible 4,278 yards.

After a tremendous three seasons with the team,  Garcia bounced around the NFL, having stints with the Cleveland Browns, Detroit Lions, Tampa Bay Buccaneers, Oakland Raiders, Philadelphia Eagles, and Houston Texans.  He enjoyed one last Pro Bowl season in 2007 with the Buccaneers, proving that the brilliance he once showed as a 49er was substantive.

Following his retirement in 2012, Garcia has continued to broaden his football legacy.  Besides his work as an active San Jose State alumnus, he has since served on the advisory board of the revival of the United States Football League (USFL) and mentored multiple young quarterbacks.  Just recently, he had spent time with the then St. Louis Rams as a special assistant.  Jeff Garcia will always be held close to 49ers fan’s hearts for his heroics in a time of struggle, and is a model of a player who took his own path to a successful NFL career.