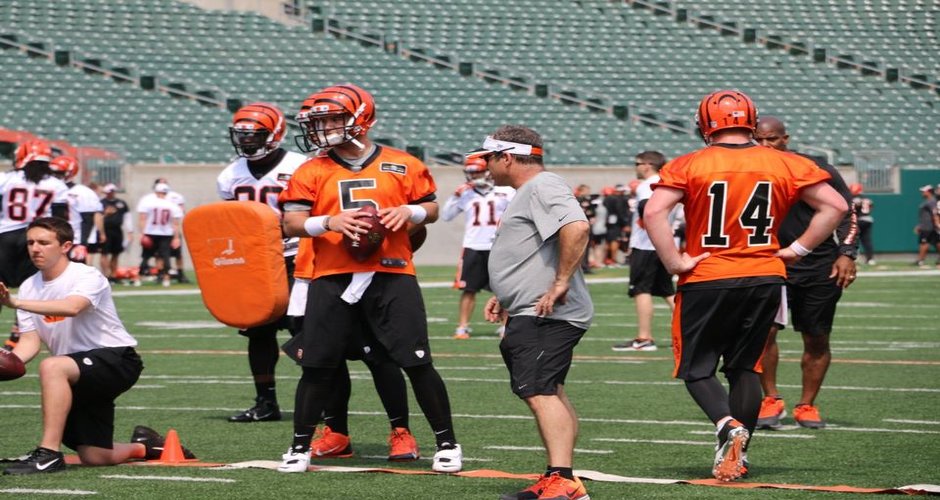 A.J. McCarron has been under the microscope through out his college career. That’s one of the things that comes with being a two time national champion and quarterback for a program like Alabama. Playing for Nick Saban at Alabama prepared McCarron for the NFL. Pro Player Insiders got to talk to him about why he is ready to be a professional player.

“I feel like I’ve been prepared for this next level playing at Alabama. It’s a different lifestyle college-wise playing there. I think that’s one of the things that’ll help me going into this next level. A lot of guys haven’t experienced that whole type of lifestyle, being under the microscope at all times, scrutinized no matter what you do. You’re never gonna be 100% right, everybody’s always gonna have an opinion so, I felt like I’ve always handled myself in a first class manner through college and I just wanna keep my name clean and not bring any bad spotlight on not only my last name as a family but the organization.”

One thing that is important about being a quarterback is having the ability to take things one moment at a time. He was quick to point out he doesn’t like to get wrapped up in what goes on in the future. It was very clear he is actually more grounded than some of the media have portrayed him to be. It is easy to see why the players at Alabama followed his lead while he was their quarterback.

“I’m not a big person on looking into the future. I’ve always felt like nobody’s promised tomorrow so I always try to take that one day at a time type look at everything and I always feel like everybody is, and this is Coach Saban coming out in me, but result orientated. So everybody looks to get quick money. Everybody wants to be rich fast. Nobody wants to go through the process of what it takes so I really just try to keep my eyes on how God has blessed me and woke me up today and let’s make the most of it so I feel like if you do the right things, you put in the work, the money and everything you always wish for will come, no matter if it’s on the football field. The NFL stands for “Not for long” so the game itself is not promised to anybody.”

There is a reason why McCarron doesn’t like to get wrapped up in the future. There was a time when just being alive was not likely for him. His life was in question after a jet skiing accident when he was younger. That left a lasting impression on him and he takes nothing for granted. His dance with death forged his motto and looking back on that has strengthened his relationship with God.

“I live life to the fullest. I was in a bad wreck when I was four turning five or five turning six and they told my parents I was dead at the hospital. It was an 18 hour reconstruction surgery on my head and from there it went from he’s going to be a vegetable to he’s gonna be blind and after the surgery it was a miracle and nothing was wrong. So I feel like God gave me a second chance at life and to not only honor him but to bless other people so I’m trying to live that out.”

There’s no way that we could chat with A.J. without his wedding coming up. He said his god daughter Starla Chapman is going to be the flower girl at his wedding. McCarron does a lot of community work as a result of his god daughter’s battle with Leukemia. “I’m big into giving back and I feel like everyone’s not fortunate enough to maybe live out their dreams or anything but try to bless everybody in every way you can. And I think it just goes back to the number one rule that my mom always told me is to treat others how you wanna be treated.” The perception of MCarron is different from the one that can be formed after spending time with him. He is clearly ready for the demanding job of being an NFL quarterback. His time at Alabama along with some of his life experiences have prepared him for his new role.

One Response to “EXCLUSIVE: A.J. McCarron Ready For The Big Show”