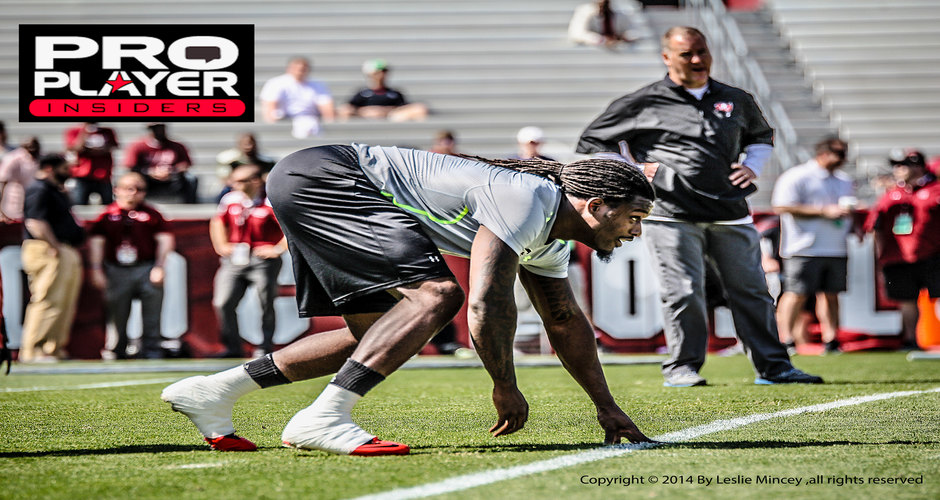 THE WORDS TUMBLED down Mt. Bristol like an avalanche, but instead of snow and debris, it was just massive gusts of hot air from a man who knows surprisingly little about how the NFL drafts talent despite his long career in the league.

For some time now, ESPN analyst Merril Hoge has been considered something of a contrarian to his counterparts in the NFL draft realm, such as Mel Kiper and Todd McShay. Hoge’s greatest failing is to single out why players are potential busts due to some skill or mannerism that typically can only be attributed to league veterans.

His latest folly was sounded this week in his searing takedown of South Carolina defensive end Jadeveon Clowney. For two minutes on a recent Sportscenter broadcast, he crushed Clowney’s technique and seeming lack of moves. Here’s some of what he said:

In that one statement, Hoge revealed a few things about himself. First, that he does not understand what the draft is used for. Let’s be realistic here: Very few of the players who will be drafted next month are “football players” as the NFL would have them be. They must be brought into camp, disentangled from many of the things they learned in college, torn down and built back up. Some do this faster than others, some never learn.

Second, Hoge seemingly delighted in a particular play against Florida that showed Clowney being stood up by a double team due to his apparent inability to keep his pad level low. That’s a whole lot of picking and choosing, because there is plenty of film where Clowney does exactly what Hoge wants him to do.

One particular sequence stands out where Hoge shows double teams occurring on both sides of the line and the end opposite Clowney doing a better job of fighting it. What Hoge didn’t point out was the epic disparity in talent between the two blockers on Clowney and the two on Chaz Sutton. While Clowney faced two linemen, Sutton was chipped inside by one lineman and engaged by a tight end.

Hardly a fair comparison, yet Hoge hangs his entire assessment on that one play.

Oh, yeah … Sutton, whom Hoge doesn’t call by name, isn’t a slouch. Sure, he’s not a first-rounder, but he can play a bit.

Third, and not something to consider lightly, Clowney played his junior season under the tutelage of a new defensive line coach. Brad Lawing had a terrific relationship with Clowney, playing a key role in Clowney’s breakout sophomore season, before moving over to Florida (hmm … do you think Lawing’s presence at Florida might have aided the Gators in game-planning for Clowney in that clip Hoge used?).

But Hoge’s biggest mistake in all of his evaluations is his apparently lack of understanding that his criticisms are of things that can be coached and corrected. You really think there’s a team out there that isn’t going to draft Clowney because of his pad level and overall lack of moves? To say something like that in reference to a league that routinely takes linebackers and turns them into deadly pass rushers is just silly.

It’s a notable thing, as well, that in all of Hoge’s appearances on that day to tear down Clowney, every other person in the room openly scoffed or hedged and often reminded him everyone considers Clowney the top pick and best talent in the draft.

There’s good reason for that skepticism in Bristol as well. This is a man who said Brian Brohm would be a better quarterback than Aaron Rodgers and that Joe Flacco was the best quarterback in the NFL. As for this year’s draft, he has not only shot down Clowney (he tweeted on March 21 that he would take Michael Sam over Clowney), but stridently proclaimed Johnny Manziel will be a bust. Sure, he might be proven right, but many of his Manziel criticisms mirror the ignorance of his Clowney criticisms in that Manziel’s faults can be coached.

ESPN is a network that thrives on contrarian viewpoints. What else explains the continued presence of Skip Bayless? It also is a network that has no problem covering itself. For example, this week Todd McShay did a mock draft and ESPN.com had all 32 of its NFL team bloggers break down McShay’s choices. It’s the type of inside-the-building news coverage that has led to the lampooning of CNN over its 24/7 coverage of the missing Malaysian Airlines flight.

But herein lies the inherent fallacy of multimedia analysis: Everything that is said right now – for and against Clowney, Manziel, even Hoge – doesn’t matter. We can’t predict the future and whenever the future plays out, what is said in March and April is often long forgotten in the impermanence that is our short-attention-span culture. Do we remember all the stupid things Bayless has said? Will we really remember whether Hoge was right or wrong until he makes his next controversial blow-hard rant?

Clowney may or may not live up to all the hype, but one thing is for certain – the reasons Hoge believes he won’t do not hold any water and are not based in the reality of how the NFL works.