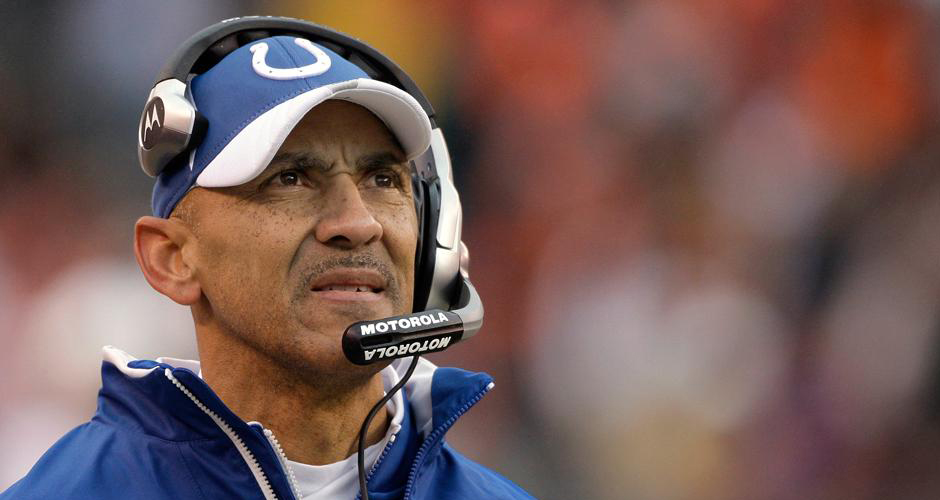 In addition to record-breaking players Brett Favre, Marvin Harrison, and Kevin Greene, the 2016 NFL Hall of Fame inductees also include a former player/coach that broke many barriers himself; Tony Dungy.

“If you’re just saying, ‘Hey, I’m doing this, I’m working to make money, I’m working to increase my status,’ said Dungy, “If that’s all there is, I think you’ll find out that’s meaningless.”

Tony Dungy achieved many things during his football career – both in between the lines and on the sideline. In 2007, he led the Indianapolis Colts to their first Super Bowl victory in Indianapolis history, defeating the Chicago Bears in Super Bowl XLI. This triumph made Dungy the first African-American head coach to win the Lombardi Trophy, but it’s his willingness to help others that grabs our attention.

Dungy played quarterback for the University of Minnesota and went undrafted in 1977. Pittsburgh Steelers’ head coach Chuck Noll took a chance on the college quarterback and decided to bring him in as a safety (and, in desperate times, a backup QB.)

He played sparingly early on during his first year on defense and special teams, but boasted a team high in interceptions during the 1978 Super Bowl season with six takeaways. This would ultimately be the highlight of Dungy’s playing days in the NFL, as he was offered a coaching position at his alma mater in 1980 where he began his second career.

Following his lone season back at the University of Minnesota, Dungy returned to the Steelers, but this time as an assistant coach. Quickly moving up the ranks, he was the defensive coordinator by 1984. Dungy moved around a bit after Pittsburgh, leading the defensive backs in Kansas City and heading the defense for the Minnesota Vikings – where his unit ranked first in the league.

In 1996, Dungy got the call every coordinator in the league hopes to get; a head coaching gig. Tampa Bay was the team, and Dungy immediately installed the Cover 2 defense. This two-high-safety look, earning the name “Tampa 2” around the league, is still frequently used in today’s pass-heavy game. After being fired from Tampa Bay following the 2002 season, the team that Dungy had a huge hand in constructing played in – and won – the Super Bowl immediately after his departure. He moved on to the Colts organization and was recognized for setting an NFL record for consecutive playoff appearances as a head coach in 2008, following his tenth straight showcase.

It’s encouraging to see a player and coach of Dungy’s status, but greater than his on-field X’s and O’s, he’s quite the man off of it.

Along with his #1 New York Times best-sellers, “Quiet Strength” and “Uncommon”, Dungy is involved in a number of charitable organizations; the Fellowship of Christian Athletes, Basket of Hope, and All Pro Dad – where he is the National Spokesman. All Pro Dad features 60+ coaches, players, and alumni who speak to the importance of being a good father.

The nonprofit organization hopes to instill morals and the educational tools necessary for fathers to become better role models and community members. My words don’t do it justice like a former player’s would, though.

“‘No excuses, no explanations.’ I first heard Coach Dungy say these words in 1996, when he explained how we were going to turn the Bucs franchise around,” Derrick Brooks explains in Quiet Strength. “But Coach challenged us to be more than just a winning football team. He wanted us to be winners in life—and he led by example. There are not enough pages in this book to share all the stories of the lives Coach Dungy has touched. You don’t have to win a ring to be a champion . . . but I am so glad he has won a Super Bowl ring so he can continue to use the platform God has given him.”

Dungy is also an outspoken Christian. Whether it’s commenting on the hot topic of an offseason, or simply explaining his faith during trying times in his career, Dungy has every aspiration to live his life by the good book.

During his years becoming the Buccaneers’ all-time winningest coach, Dungy developed many defensive-minded assistants that would eventually lead teams all across the league. Lovie Smith was the linebackers coach under Dungy in Tampa Bay, and the two faced off in Super Bowl XLI while Smith was the Chicago Bears head coach.

“Tony Dungy’s life is a living testimony of a man’s faith in God,” exclaims Dungy’s former assistant Lovie Smith. “He has given us a new picture and definition of a ‘Coach.’ Good guys do come in first!”

Along with Lovie Smith, former assistants of Dungy’s include Mike Tomlin, Jim Caldwell, Mike Shula, and Leslie Frazier. All became successful coaches, with a boost from Dungy’s hand in instituting the Rooney Rule. The Rooney Rule, named after Steelers owner Dan Rooney, requires teams to interview minority coaches for open positions. This has not only helped minority coaches that are male land more interviews, but Commissioner Roger Goodell said in February the league will start doing the same with women, giving them equal opportunity for vacant coaching positions.

Dungy is all about making a change for others, but in February, he received news that will cement his position in the history books forever. On August 6th, 2016, Tony Dungy will be inducted into the Pro Football Hall of Fame in Canton, Ohio.

Watch here as Tony Dungy receives the special knock on the door.

A knock on the door and you’re in the Hall of Fame. Watch the special moment with @TonyDungy and his family:https://t.co/T6SvWBuH8L