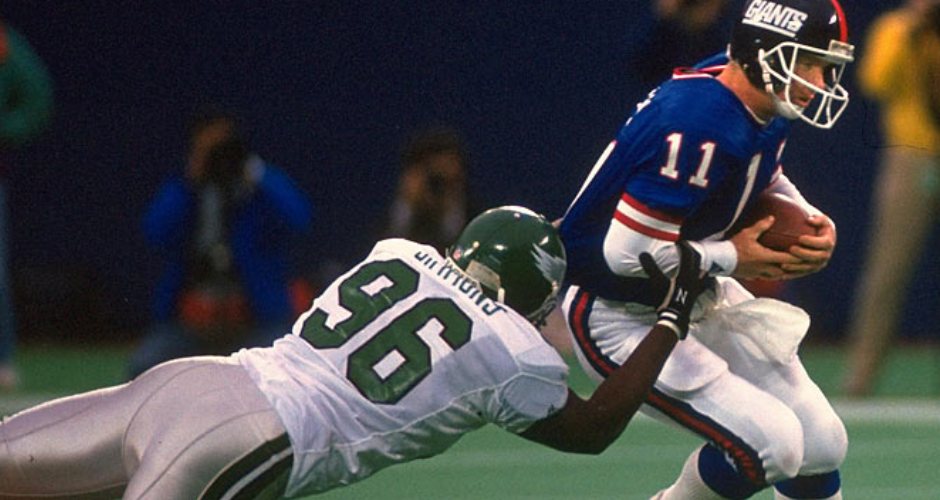 When the Philadelphia Eagles and New York Giants square off Sunday at MetLife Stadium, it’s a meeting of two proud franchises that have combined to lose seven straight games. And it’s safe to say neither fan base is amused these days.

But funny things have often happened when the Giants host the Eagles in New Jersey.

That would be funny as in ha ha…but not amusing if you’re a fan or a member of Big Blue.

Many will recall the fabled “Miracle of the Meadowlands” in Week 12 of 1978, one of the most unlikely plays in NFL history as Giants’ quarterback Joe Pisarcik mishandled a snap from center in the closing seconds of a certain win, the ball bouncing and winding up in the hands of Eagles’ cornerback Herman Edwards, who returned the fumble 26 yards for a score in a 19-17 Philadelphia win.

And who could forget what happened in the swamps in 2010, when Tom Coughlin’s team owned a 31-10 lead midway through the final quarter before quarterback Michael Vick and company led a frantic comeback to tie the game then watched speedy DeSean Jackson returned a punt 65 yards for a touchdown on the final play of the game.

But 10 years after Edwards’ miracle and 22 years before Jackson’s return, there was another instance of the near-impossible happening for the visiting Eagles at the expense of their hosts.

Buddy Ryan’s Birds and Bill Parcells’ Giants squared off for the second time in the 1988 season in an atypical head knocker between the clubs. And after three quarters of play, New York owned a 17-10 lead thanks mainly to a pair of touchdown passes by quarterback Phil Simms. But Eagles’ quarterback Randall Cunningham (sacked 5 times on the afternoon) and company would work a little magic in the fourth quarter. With less than 5 minutes to play and in Giants’ territory, the Philadelphia signal-caller would complete a pass to tight end Keith Jackson, who would gain 16 yards before fumbling into the end zone. But wide receiver on the spot Cris Carter would recover the ball for a touchdown and the clubs would eventually find themselves in overtime at 17-all.

And that’s when the fun really began. In the extra session, after the Eagles failed to gain significant ground on their first possession, Giants’ quarterback Jeff Hostetler (who had replaced an injured Simms in the third quarter) was intercepted on his team’s third play of overtime by safety Terry Hoage, who returned the ball to the New York 41-yard line. Eventually, Eagles’ placekicker Luis Zendejas would attempt a 31-yard field goal on third down, but the kick was blocked. And instead of celebrating a game-saving play, Parcells and the Giants watched in disbelief as Eagles’ defensive end Clyde Simmons scooped up the ball at the Giants’ 15-yard line and ran in for the game-winning touchdown.

Just how important did that unlikely turn of events prove to be? Both the Birds and the G-Men wound up 10-6 that season, with Philadelphia winning the NFC East based on the fact that they swept the Giants that year.