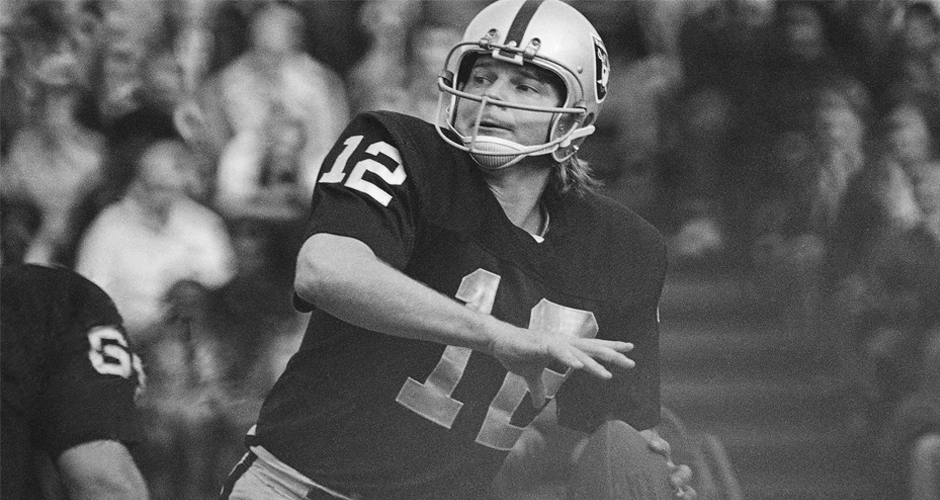 The cliché “they don’t make them like that anymore” is often just that, a cliché. But when it comes to Ken “Snake” Stabler, it’s the absolute truth.  A man that was as cool off the field as he was in the fourth quarter, Stabler was simply one of a kind.  Stabler reached the pinnacle of Pro Football, winning the Lombardi Trophy and was later elected into the NFL Hall of Fame in 2016.  A substantial leap for a kid whose story began in a small town in Alabama.

Ken Stabler was born on Christmas day 1945 to Sally and Leroy Stabler in the small town of Foley, Alabama. His mother Sally worked as a nurse while his father Leroy, or “Slim,” was an auto-mechanic who had served in World War II.  Slim often dealt with the horrid memories of war by drinking heavily, but he always found time to watch his son play sports.

The legacy of Ken Stabler as a football player may not have come to pass had it not been for his father. Slim bought a ’54 Ford for Ken on the one condition that he continue with football at a time when he had aspirations of playing pro baseball.  A car-lover like his old man, Ken relented and pursued football.

Wearing number No. 12 for Foley High, Stabler excelled at the varsity level, where he finished his high school career with a record of 29-1 in his three seasons at starting quarterback. During that time, he would earn the nickname “Snake” from coach Denzil Hollis who watched Stabler run a punt back for a touchdown that led Hollis to say, “Damn, that boy runs like a snake.”

Stabler’s gridiron prowess led to scholarship offers from all of the top college football programs. None of them had a shot, however, when the man known as the “Bear” personally recruited Stabler and said “Son, we’ve got to have you.” Stabler had no choice but to accept.  Stabler was on his way to Tuscaloosa.

Serving as a backup for his freshman and sophomore seasons, the Snake would make a name for himself in his first season as starting quarterback in ’66, leading the Crimson Tide to an 11-0 record and a Sugar Bowl victory over Nebraska.

During his senior season, five African Americans broke the color barrier and joined the football team as walk-ons. According to one of those players named Andrew Pernell, he didn’t truly feel welcome until Stabler went out of his way to make them feel like regular members of the team.

“One day Stabler just walked right up to me before he said a word to anybody else and said ‘How ’bout it Pernelli?’ That always meant a lot to me.  He was a guy the others looked to as a leader and I think he made them feel like it was O.K. to talk to us and treat us like regular members of the team.”

Stabler exuded an infectious confidence that spread to his teammates wherever he went. With that confidence came a wild side that often times landed him into trouble.  During his senior season, he was kicked off the team for cutting classes and partying, but was later given a second chance.

In a game against Auburn later that season, Stabler would become an Alabama legend with his infamous “Run in the Mud” 53-yard scamper that gave the Crimson Tide the victory over their in-state rivals.

This would set the tone for his prolific NFL career.

Drafted 52nd overall to the Oakland Raiders in the 1968 NFL Draft, Stabler would enjoy a brief stint with the Spokane Shockers of the defunct Continental Football League before wearing the silver and black.

Stabler arrived in Oakland in 1970 where he would be forced to wait his turn in the quarterback rotation as Daryle Lamonica known as “The Mad Bomber” for his cannon of an arm, had cemented himself as the Raiders’ starting quarterback at the time.

His first taste of the NFL came during waning moments of the ’72 AFC Divisional playoff game where he was thrust into action after Lamonica went down with an injury.  Stabler would nearly win the game for the Raiders after scoring on a 30-yard touchdown run with 1:17 left in the game.  Then this happened…

The following season the Snake became the undisputed starter, winning eight games during the regular season. Stabler had become the leader of the cast of misfits known as the Raiders, a team that had been known as winners, but not a champion.

“We developed the tag of a team that couldn’t win the big one,” Stabler said.  “And I guess we couldn’t.  Be we knew we were good enough and that one year we were going to get to the Super Bowl – and win.”

The Snake did his part the following season, earning AFL MVP honors during the regular season, but the season ended once again without a ring.

Stabler would have to wait two more years for his crowning achievement. He led the Raiders to a Super Bowl Victory over the Minnesota Vikings in ’76 and cemented his legacy as one of the best quarterbacks of the decade.

Not to be outdone, he followed up his Super Bowl victory with one of the most infamous plays in NFL history the following season, “The Ghost to the Post.” The Snake would end up being the focal point of more infamous plays during his time in Oakland including “The Sea of Hands,” play, and the “Holy Roller.”

When his time in Oakland ended 1979, Stabler never again reached the heights he did throughout the ’70′s and retired after the ’84 season.  He is the current Raiders’ franchise leader in wins, pass attempts, passing yards, passing touchdowns, and interceptions.

Despite the immense success enjoyed by Stabler, he was snubbed from the Pro Football Hall of Fame until being posthumously inducted in 2016. Stabler had passed away the year before at the age of 69 after losing his fight with colon cancer.  His grandsons Justin and Jack Moyes stood in for him during the induction ceremony.

The man they called the, “Snake” was finally where he was supposed to be, among the NFL greats. A maverick both on and off the field, Stabler was one of the best of his time and there will never be another one like him. Perhaps his former coach, John Madden, said it best when describing his unflappable quarterback.

“I’ve often said, if I had one drive to win a game to this day, and I had a quarterback to pick, I would pick Kenny.”