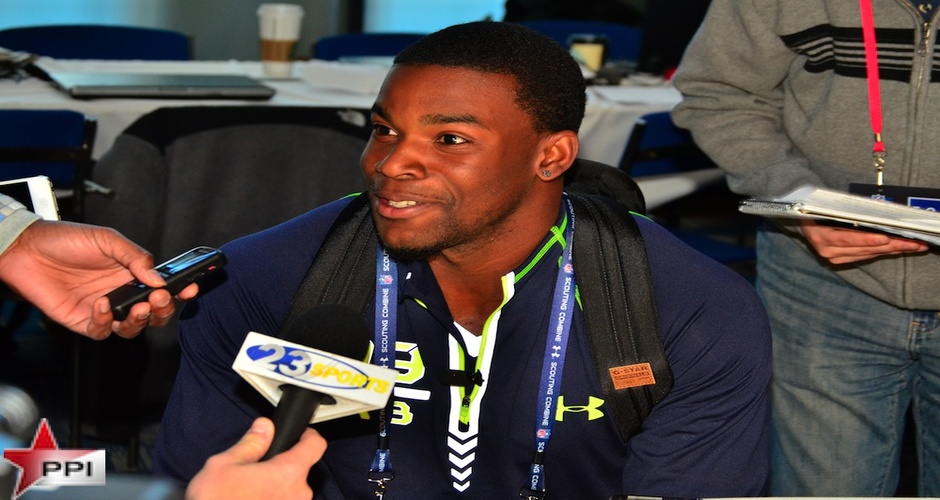 Henry Josey showed he was NFL game ready by delivering one of the top performances at the 2014 NFL  Combine. His numbers opened a lot of eyes and caused many to go back and take a closer look at his film. What they saw was a player that posted his second 1000 yard rushing season. Josey was the second running back in the history of the University of Missouri to reach that milestone.

Josey tore his ACL, patellar tendon, MCL and both the lateral and medial menisci. This injury required three

separate operations over a period that stretched from November of 2011 through May of 2012. He had rushed for 1,168 yards and nine touchdowns before suffering a knee injury against his home town Texas Longhorns.

“The combine was a great experience. My trainer did a great job preparing me for it mentally. I had the easiest evaluation there. I was worried about it at first but after they got up and were done looking at my knee, they were confident in how stable my knee was. They were amazed and were like who is your doctor? Who worked with you? It was all positive things and I heard that when I went into each room.”

The combine results speak for themselves. Here are his numbers:

20 reps on the bench

Just like most of the other prospects, Josey was subject to some of the strange questions. “I got the paper clip question. It was funny to me but so serious to them. They have a camera on you while you are doing it and you have to keep going for a minute after which I told them that I am done. Not much else I could do with a paper clip.”

Josey’s  comeback from injury is a testament to his mental and physical strength. Josey is driven by the opportunity to provide for his son. When we talked, he had just gotten done dropping his son off at daycare with treats for the class because it was his birthday. “He is my world. He watches me a lot. Almost too much. I said a prayer with my son about making my decision.”

Each year, draft prospects are subject to current NFL player comparisons. When asked about current NFL players that he saw a  similar style of play to his in, Josey had a few guys in mind. One of them was a perfect comparison to me. “Reggie Bush, that’s a guy that I see the one step and get up the field quickness with. He gets up the seam very fast. I don’t just have one style. I am an all around player, I can do it all. There is no certain style of play for me.”

Josey’s pro day is in the books and he stood mostly by his combine numbers. It’s all a waiting game at this point. The last step is to go to the various workouts that will be scheduled. He is still working hard to stay in shape. I am working out every day, sometimes twice a day. Most of all, I am just trying to enjoy it. Everybody doesn’t get to do this, so I am trying to enjoy the process.”

Listening to Josey talk about his journey is both inspirational and emotional. In his own words what his son and his grandparents mean to him:

Oh yes it is it’s his third birthday. I dropped him off at daycare so I could get some things done but we have a lot of things. He’s got shopping on his mind and going to Chuck E Cheese and I have to take cupcakes to his classmates so there is a lot going on today.

Oh definitely my son is my world and he looks up to me for every single thing. He watches me too much and that I often compare him to myself so I just wanted to go home and relax. I was even away by myself in the house with just me and him and my grandparents I just called them about it and the last two days I just ended up talking to them one more time and I said a prayer with my son while we were at the house, watching Shrek of course, and after that I said that’s what I’m going to do. This is going to make me happy and I’m confident in myself enough that I can take this leap to the next level, to the NFL and be an NFL player now.

On his special relationship with his grandmother

My grandmother raised me from six months old. She thought a lot about being a Mom. I think a lot about [being a parent] and really take into consideration how much she did for me to be able to be the person I am today. I could have been in an orphanage or adopted by somebody else and not have these opportunities that I have to be able to be such a great person and to be a great athlete and not have to worry about all these things just because she has taught me so well.  I just thank her a lot she is always the first person I know I can call at any moment and I know she’ll answer the phone even at 3:00 in the morning.

Just the parenthood aspect of it I mean I had a Mom and Dad which was them and just how they taught me so much. I’m a very old school guy and now my son he already has like the same old school type of attitude because of his grandpa and that’s just something I like to carry on that old work ethic from just being around that type of people. I just take everything they have done for me and that’s the kind of person that I am just because that’s how I was raised.

On his decision to go to Missouri

I could have stayed in Texas and been another Texas athlete. I could have stayed at home. I just wanted to do something different. I am a big family guy and I like being around people that just make me comfortable. When I went off to Mizzou for my visit I felt that it had the family atmosphere that I wanted to be around it was there. That’s the main thing that made my decision so easy for me. As soon as I left I came to my grandma and I was like hey I’m going here. We can stop all this these other visits. For me the process is really crazy but once I knew where I wanted to go it was done. There was no other decision that I wanted to make and I couldn’t be happier with my decision going to Mizzou.

As a player its something you will remember for the rest of your life because its something he doesn’t do at all and it’s something that shows how special you are to him and not just another athlete that he needs. It just shows to you the family atmosphere we have that’s just a bond and for my teammates I feel he just brought us closer together when he did that. Like it wasn’t just some show for me I shared it with my teammates and it was just like a special moment for all of us and for those people that sat there and watched me go through things and seeing me crying in the training room. It’s just the family part of Mizzou.

I’m a big team player I do whatever I have to do for my team. I’m a hard worker and something they don’t have to worry about. I’ve always been great in the locker room and always have fun and play around and I get along with anybody. I’m somebody that has the ability to get along with people there are so many different type of people in there. People who have been raised differently and you have to be able to connect with those people and that also brings you closer together as a team so I feel like I can find a way to get myself in there and to also be someone they can trust and they can talk to and they just can have fun and call anytime. Those are the important things about a locker room is just having that togetherness that you can rely on that guy next to you.

On what music he listens to before games to get prepared

I always loved Adrian Peterson he was a guy that I like and loved watching in the NFL. He is a hard worker and then off the field I say Deion Sanders I love what he does in the community. I’m a giving person and I love giving back and I just like the way he has all that stuff set up with his program and his school and it’s just nice to see people get into that.

On staying physically and mentally prepared for the draft

I’m always going to be ready this is something I have been waiting on my whole life but I stay working out every day sometimes twice a day but most of the time right now I’m just trying to relax and enjoy it because if you keep worrying it doesn’t help you. So after the combine and your pro day you just have those interviews to worry about so you just go in there and be yourself and keep relaxed and just keep enjoying it. Everybody doesn’t get to do this in their career so that’s the main thing I have doing is just enjoying the process and of course I spend time with my son whenever I get to.

On his plans for the draft

I will be with my family and the place that I was raised and that’s where I will be the whole time. I was going to take off and go fishing but now I thought about my phone losing some service out there and that wouldn’t be good so I decided I would just relax and be with my family doing exactly how I always do.

The road that Henry Josey has traveled is one that serves as motivation keeping him on course to break into the NFL and fulfill his dreams.Part of life is overcoming obstacles and Josey has not only done that he has  also remained humble, grounded and hungry for all the right reasons.