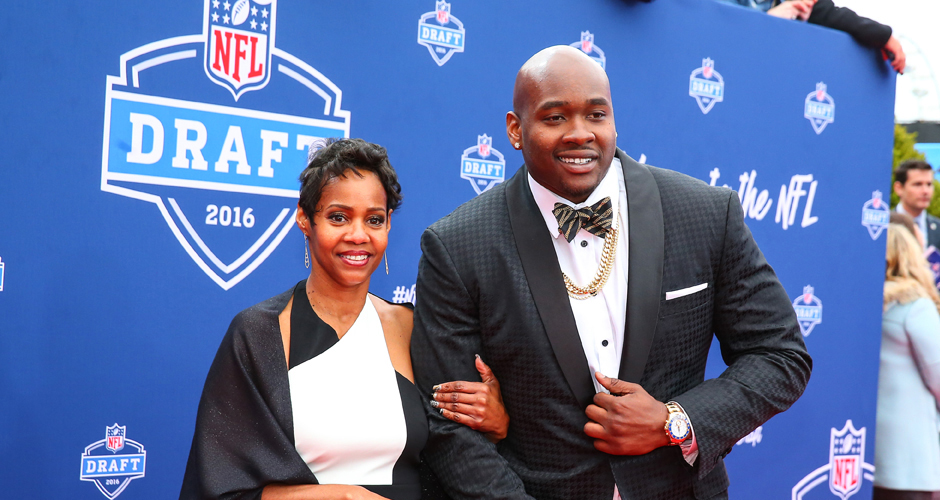 Mother’s Day allows family members to spoil mothers with no bounds. Moms around the world are catered to today more so than any other day of the year, and mother’s of NFL players are no exception. The relationships of these women and their children are often  different than that of any other mother-son relationship. Not only are they nurturers, they also have to be teachers, coaches and cheerleaders to their sons which gives them a unique bond.

A’Shawn Robinson’s mother Abigail Robinson has told many stories of her son from his childhood. She said she remembered going to pick him up from a youth league football practice and he was sitting up against a tree. He withdrew himself from the game because he didn’t like the blows delivered to him.

The 7 – 8 year olds he played with didn’t mind playing with him. Being the hitter was different from taking one and he was over it. Mom wasn’t though, she had already paid for 4-year-old A’Shawn’s season and he was going to play it.

“He’s always been big for his age. I called him the man child,” she said. “He’s just not mean. I always thought, well if you’re going to go out there and play with these big boys, of course he was big, but he was more like a teddy bear.”

He continued to play and became a great tackle despite starting just twice his freshman year. Abigail and A’Shawn seemed to be close throughout his childhood into adulthood.

In a different light, Desiree Tunsil Polingo and Laremy Tunsil had their ups and downs. Problems surrounding Tunsil’s stepfather and his mother took the headlines off and on, but his relationship with his mother never faltered.

“We’ve always been close,” Polingo said. “It didn’t change our relationship. All of that just made us stronger together. We went through it together. We prayed about everything, humbled ourselves and we knew what people say about you in that situation doesn’t matter. We knew it was just somebody out to do harm, so you just stay focused. What God has planned for you, no one can destroy. We knew that the truth would come out.”

That didn’t stop Tunsil from giving his all. It seemed as if all the outside stress poured out of him on the field giving him more energy and focus. His mom noticed starting his freshman year at Ole Miss.

“He wants to be the best player ever,” Polingo said. “He sets his goals pretty high.”

Picture a mother who’s so excited for her son it beams from her. Jared Goff attended his parents Alma Mater and they were excited but never pushed him in that direction.

Jared played multiple sports in high school before settling on football in college. His mom saw a lot of his father in him but in a laxer way.

“Jerry was a thinker, Jared is a little less wrapped up in it,” Mrs. Goff said.  “I’m not saying Jared isn’t prepared — he practices and lifts weights and watches film — but there is a difference between father and son.”

Robert Nkemdiche’s mother Beverly had her work cut out for her though.Beverly is a politician in her home country of Nigeria and would frequently return to Africa to take care of things. She had three sons, two of which attended and played at Ole Miss. While she was away handling politics in Nigeria her husband Sunday was home with the boys. Sunday Nkemdiche is a doctor who didn’t have to travel for work. Robert would be the one that made it to the NFL and it was not without drama before his college career began.

“My wish was that my sons would play together,” Mrs. Nkemdiche said. “But up until last night, I wasn’t sure if it was LSU or Ole Miss. But Robert came to me and said, ‘You got your wish, Mom.’ When he said that, I jumped. He liked LSU, and he went there last week and, honestly, I was nervous about that, but I told him, ‘Whatever you want, I will support you. It doesn’t have to be my wish.’”

She always supported her son no matter where she was and was extremely excited to be with him and see him living his dream of making it to the NFL.

These NFL moms can tell stories of how their sons were growing up and what they did to help their sons achieve their dreams. They are supportive and strong guardians who can lend a shoulder to cry on or give a bear hug after a game. Celebrate these women not only today but every day. Happy Mother’s Day to you all.