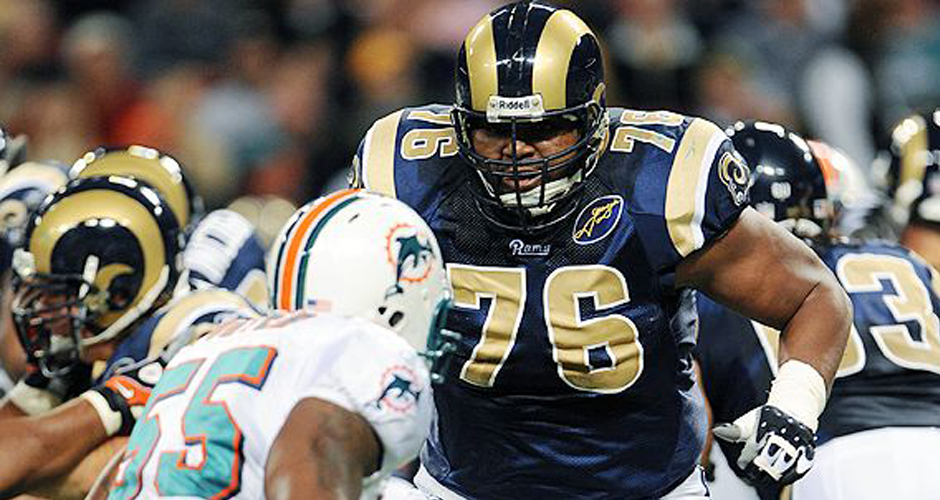 Orlando Pace is one of the most complete left tackles the NFL has ever seen. He will be joining other greats in Hall of Fame this year. Pace credits his older cousin, Keith, as one of the reasons he played football. His cousin played at Bowling Green and it made him realize he could too. Pace played basketball and football for Sandusky high. Pace credits his athleticism to his basketball days as a student at Sandusky High where he thought he would be the next Michael Jordan. When he realized he was not Jordan, he began to focus on football and earned a scholarship to play at Ohio State. Pace was highly sought after coming out of Ohio State as he wowed scouts with his size, strength, and athletic ability.

He was an All-American, won multiple awards, and even finished fourth in the Heisman race as a Buckeye. At 6’7, 324 pounds teams were aggressive in their pitch to draft him first overall. The Rams traded four picks for him in a deal with the New York Jets to get the first pick to select Pace. He appeared in 13 games as a rookie and by year two he was a full time starter. The Rams really started to hit their stride in 1999 as Pace was mauling the opposition with speed strength, good technique, and great dexterity. He was sent to his first Pro Bowl and was a First-team All-Pro. Pace was the first tackle named to the Pro Bowl since Jackie Slater.  Pace was the complete package at left tackle with his ability to run and pass block. He helped keep Kurt Warner clean despite being on his blind side and he created alleys for Marshall Faulk to run through. With the holes Pace created for his running backs, one could practically drive a Mack truck through them. Although he was the forgotten man, he was certainly an integral piece in the Rams dominance.

Players like wide receiver Isaac Bruce appreciated the fine left tackle’s meaning to his team in an interview with ESPN’s Nick Wagoner. He knew that any injury to a player like Pace could throw off the cohesion of the team because there is no one player capable of replacing him. The former Buckeye was moved by Bruce’s words and said, “That’s what you play for.” Pace helped guide the Rams to a victory in Super Bowl XXXIV and helped Kurt Warner win a MVP award. The Ohio native helped Warner and Marshall Faulk win MVPs in 2000 and 2001 and went to seven straight Pro Bowls. Pace was the prototypical left tackle that every signal caller dreamt of. He was a mountain of a man in height and although he was not big in weight he used it too his advantage. “Big O” was as quick as a cheetah and had the strength of a charging elephant. He helped maintain a balanced attack for a team most figured to be more of a finesse group.

In 12 seasons, Pace helped account for the most gross yardage in the NFL compared to other teams. If you were his running back, you were almost guaranteed to run for 1,000 yards. For seven straight seasons, Pace helped his tailback become 1,000-yard rushers. Quarterbacks benefited from his steady play as they compiled over 3,000 yards in 12 straight years. Fantasy Football enthusiasts probably kept track of those statistics and drafted a Rams quarterback or running back every year. Before finishing his career with the Chicago Bears in 2009, he was consistent for the Rams starting in 154 straight games. Pace recognized the tough position he had to play as he went up against some of the best players on defense. He believes left tackle is a “skill position” because “nine times out of 10 you are blocking probably the best athlete on their defensive team.” This is true especially in today’s game because left tackles have to stop 300-pound behemoths that move like wide receivers.

Injuries began to derail his prolific career from 2006 to 2009 causing him to be released twice by the Rams and Bears. Pace finished his career as a four time All-Pro player and was named to the NFL 2000s All-Decade Team. Pace remains close to the Rams franchise and announced their second day picks at the NFL Draft in New York earlier this year. Pace has thought about coaching, but he devotes all his time to his family. He has lost weight since his departure from the league as most former linemen do. As big as he is in stature, Pace’s influence is even bigger off the field. He was recognized in 2008 by his teammates for his inspiration, sportsmanship, and courage with the Ed Block Courage Award. Pace used to run a sports bar called “Big O’s Ltd” in Sandusky, Ohio. He would typically go there and sign autographs and mingle with fans. Also, Pace rents homes in McArthur Park in Sandusky to low income households and donates five tickets to every Rams home game to disadvantaged kids. Finally, he donates money to Sandusky High. Pace views himself as “grounded” and is proactive in Ohio as well as Missouri.