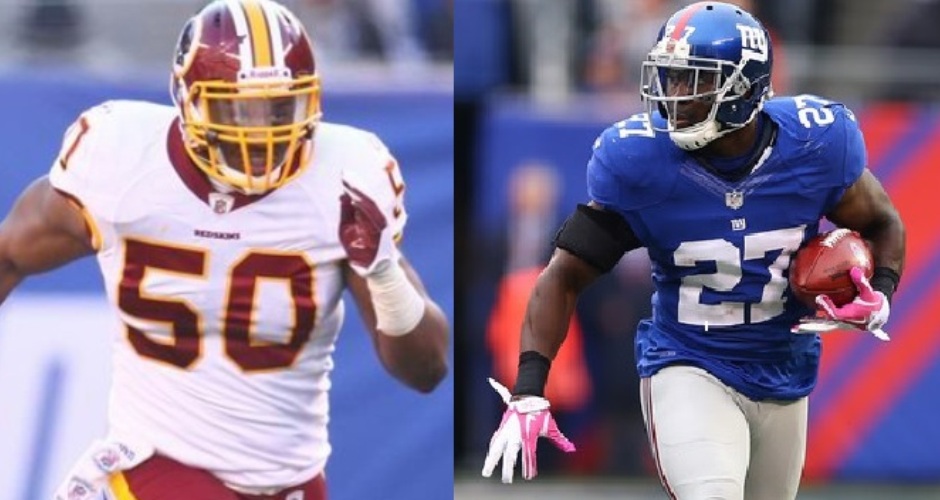 New York Giants safety Stevie Brown will face off against Washington Redskins linebacker Rob Jackson in Pro Player Insiders first Gridiron Chef competition on April 23, 2013 in New York City. Chef Plum, an avid football fan and chef extraordinaire will host the no-holds barred culinary cook-off. Featuring food, fun and football, the event and will also benefit the Sandy Hook Promise. Plum appeared on this season’s “The Taste” on ABC, the Food Network, and is a columnist for ProPlayerInsiders.com.

“I am truly humbled to be involved with such an amazing event. The Sandy Hook Promise is an great charity and what they do for our town, can’t be put into words,” said Plum, a resident of Newtown. “Honestly who wouldn’t want to be involved in a project like this? I can’t wait to show the world just how awesome Newtown is.”

Competitors and a sous of their choosing will chop, slice, and dice “off the field” from a mystery basket of ingredients. The food competition is set to extend the on-field rivalry between the Giants and Redskins by pitting Brown against Jackson. Dishes will be tasted and scored by celebrity chefs Diane DiMeo and Kim Daisy, as well as former NFL tight end Reggie Kelly. Tickets can be purchased at ProPlayerInsiders.com or  http://gridironchef.eventbrite.com

“Like everyone across the nation, I was shocked and horrified as I watched the events of Sandy Hook Elementary play out on my television. Because I grew up in West Haven, Connecticut this senseless act of violence really hit home for me,” said linebacker Jackson. “Partnering with Pro Player Insiders to raise money for the Sandy Hook Promise was an easy decision.”

“Teamwork is important in life, whether it be in the kitchen, on the field or in the community,” said Melissa Mahler Co-Founder and Editor-in-Chief of Pro Player Insiders. “I am grateful for the players and chefs that have joined our team in giving back and excited to see what Rob and Stevie cook-up.”

It didn’t take long for the smack-talking to begin between these two rivals as Jackson said, “It’s an opportunity to show off my cooking skills and have a little fun, but also remember those families who are still suffering. Plus, I know I’m a better cook than Stevie Brown.” Brown responded by saying, “I am not the best chef in the world but I know I will take home the crown of top Gridiron Chef.”

Kelly added, “I am excited and can’t wait to be a judge at the 2013 Gridiron Chef event. This is a great opportunity not only for me to give my time to a worthy cause but also have tons of fun in the process! Watch-out chefs, I’m a tough cookie to please; so be on your ‘A’ game or else you might get voted ‘Off the Island.’”

Pop Up Republic is the official social media partner for the event and a new hip brewery from CT, Two Roads Brewery, is the official beer sponsor and players will be chopping it up with knives from Cutco Cutlery. The event will also feature food and beverages from many NFL players including meats from Will Witherspoon’s Shire Gate Farm, Pro Player and Tailgate wine from Victor Green and Reggie Kelly’s KYVAN Salsa.

To be a sponsor of this event, please contact Justin Kern  jkern@roplayerinsiders.com

Sandy Hook Promise (SHP) is a non-profit corporation created by members of the community of Newtown, Conn., in response to the shooting on December 14, 2012, at the Sandy Hook Elementary School, which killed 20 children, four teachers, and two administrators. The first mission of SHP is to support the families of the victims, the survivors, first responders, and teachers and staff of the school as well as the community of Newtown, (“our community”) by providing financial and service support and assistance whenever possible and for as long as it takes for each individual to heal.We support common sense solution to help reduce gun violence.

Brown will be entering his fourth NFL season and is coming off the best season of his career. In his first year with the Giants, Brown made 76 total tackles with eight interceptions, good for second in the league. It was the highest interception total by a member of the Giants since 1968 when Willie Williams had 10. His 307 interception return yards were the fourth highest total in NFL history. Brown has also taken part in NFL Play 60 since 2010 and Read America since 2012.

Jackson has played all five seasons of his career with the Washington Redskins and is coming off the best year of his career. Playing as a backup through much of his first four seasons, Jackson replaced the injured Brian Orakpo in the starting lineup for the Redskins in 2012 and made the most of his starting opportunity be intercepting a pass and returning it for his first career NFL touchdown against the St. Louis Rams. He finished the season with four interceptions, 4.5 sacks and 35 tackles. Jackson was born in West Haven, Conn. At Kansas, he earned honorable mention All Big-12 Conference honors in both 2006 and 2007. He was drafted in the seventh round of the 2008 NFL Draft and has secured his place firmly on the Redskins’ roster with his effort.

Chef Plum is a resident of Newtown, CT graduate from The Culinary Institute of America with over 18 years of experience. He has worked all over the east coast in five-star hotels and resorts, as well as small neighborhood restaurants. Plum-Luv-Foods was born in 2006 and since then has brought whole farm foods to families, small parties, Broadway actors, executives, Food Network and network TV. An avid Football fan, Plum is the food writer for ProPlayerInsiders.com giving his weekly take and recipes for game day foods and is also as an award winning on-camera talent for eHow.com. I think its important for people to know I live in Newtown, can you also say in my bio Plum luv foods was born in 2006 in Newtown.

DiMeo was on ABC’s prime time cooking show with Anthony Bourdain and Nigella Lawson and is a winner of the Food Network’s “Chopped.” She is the co-star of the worldwide traveling cooking show, “Mission Menu,” for TLC/Discovery International and NUVO TV.

Kelly played in the NFL for 13 years with the Atlanta Falcons and Cincinnati Bengals. He was a part of the Falcons team that became the first franchise in NFL history to win a game at the famed Lambeau Field against the Green Bay Packers in 2003. Kelly retired in 2011 and is focusing his efforts on his family food line, KYVAN Foods. The company produces salsa, seasoning, and sauces to bring a taste of the south to the world. The company is named after his two kids, Kyla and Kavan.

Daisy was taught at an early age by both her grandmothers and great aunt Daisy, after whom her company is named. A graduate of Wofford College, Daisy has been in the food business for more than 30 years. Daisy Cakes began in June 2009 and in April 2011; she was cast in the ABC show “Shark Tank.” Along with the help of her business partner, Barbara Corcoran, many opportunities have come her way since. She has been on “The Nate Berkus Show,” Anderson Cooper, “ABC World News,” “Today Show,” “The Taste,” and QVC. Daisy Cakes have also been featured as a prize on “The Price Is Right” and “Wheel of Fortune.”