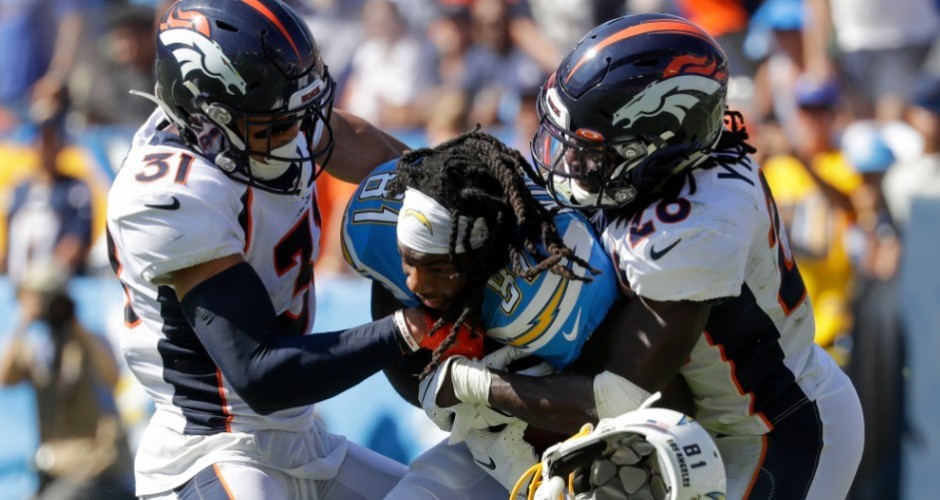 The Broncos? Really? The 0-4 Broncos that were gashed last week by Leonard Fournette and the Jaguars for over 225 yards rushing…those same Broncos?! Reaaaaaally? This one is a headscratcher for sure, Chargers fans, as your Los Angeles Chargers now find themselves under .500 on the year and let’s be honest, there are way more questions than there are answers.
The stage was set Sunday, and quite frankly, it could not have been more perfect. The Chargers were getting back their superstar running back, Melvin Gordon, against a defense that was absolutely obliterated the week before on the ground. But before Gordon could even find his rhythm, the Chargers were down 17-0 in the second quarter. The game plan was scrapped, two weeks’ worth of preparation to ease Gordon back into the mix was immediately thrown out the window. The Chargers found themselves playing catchup, and that meant passing the ball.
Philip Rivers completed 32 passes on 48 attempts, with Chargers second string running back Austin Ekeler the recipient of fifteen of those. Undoubtedly, this was not the blueprint the Chargers used in their previous two victories this season. This was Rivers’ most passing attempts of the season, but also his fewest yards (211 total) through the first four games of the season. Coupled with two interceptions, and a relatively quiet outing from wide receiver, Keenan Allen (4 catches, 18 yards), the Chargers appeared to lack any semblance of an identity on Sunday.
When the Chargers offense is firing on all cylinders, one could argue that it is because of a balanced attack on the ground and through the air. The Chargers failed to capitalize on a porous Broncos run defense on Sunday, only gaining 35 yards total between Ekeler and Gordon. Additionally, they were never able to get anything to materialize deep downfield, which resulted in numerous drop-offs to Ekeler.
Inevitably, fingers are going to be pointed and someone’s going to get the blame. The Chargers defense will probably get the majority of the wrath after Sunday’s dismal performance. Despite being majorly hit by the injury bug – without defensive end, Melvin Ingram, and again without safety. Derwin James, the Chargers were unable to slow down the Broncos running back tandem of Phillip Lindsay and Royce Freeman, who combined for 175 yards on the ground. Joe Flacco didn’t look like Joe Montana, but really, he didn’t need to, as the vet only attempted 20 passes on the day and got all the help he needed from his running backs.
The Chargers will look to get back to their winning ways next weekend when the struggling Pittsburgh Steelers come to town for a primetime matchup. They will look to take advantage of the fact that the Steelers will be without future Hall of Famer, Ben Roethlisberger, and in all likelihood, without backup quarterback, Mason Rudolph, who entered into concussion protocol this weekend. If the Chargers hope to keep pace in the division with the Chiefs (4-1) and the Raiders – yes, the Raiders (3-2) – they will have to take advantage of this easy schedule and yet another favorable matchup.