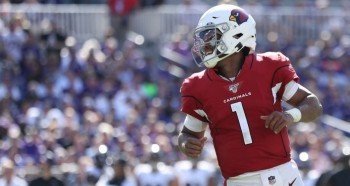 The future of the NFL was on display in Baltimore last weekend. Football fans got a glimpse of the new age of NFL quarterbacks as Kyler Murray and the Arizona Cardinals took on Lamar Jackson and the Baltimore Ravens.

The Cardinals, as they did in week one, had early struggles leading to only nine points in the first three quarters of play. They were able to cut the Ravens’ lead to three points with a David Johnson touchdown and two-point conversion pass from Murray to KeesSean Johnson early in the 4th quarter. That was as close as the Cardinals would get, eventually losing 23-17 in a hard fought battle with the AFC North Ravens.

While Cardinals’ fans did not get the outcome they desired, it was hard not to be impressed with the day that Murray had. Murray connected on 25 of his 40 passes for 349 yards and once again almost lead the Cardinals to fourth quarter comeback.

Jackson was equally, if not more impressive. He was able to account for 120 rushing yards on top of his 272 yards through the air. He also added two passing touchdowns. The Ravens and Jackson are trying to silence critics who think the QB is only one dimensional. The first two weeks of the season would suggest Jackson will be a terror on the ground and through the air for years to come.

Both Murray and Jackson are ushering a new type of quarterback play in the NFL. Both former Heisman Trophy winners have brought a unique new brand to the NFL. Murray more of passer than Jackson has been, only uses his legs when absolutely necessary. Jackson, was much more of a runner during his rookie season. The ability to add a more dynamic passing attack to the Ravens’ offense could lead to long term success for Jackson and the entire Ravens team as well.

The new wave of NFL quarterbacks is being ushered in. Kyler Murray and Lamar Jackson are definitely leading the way.