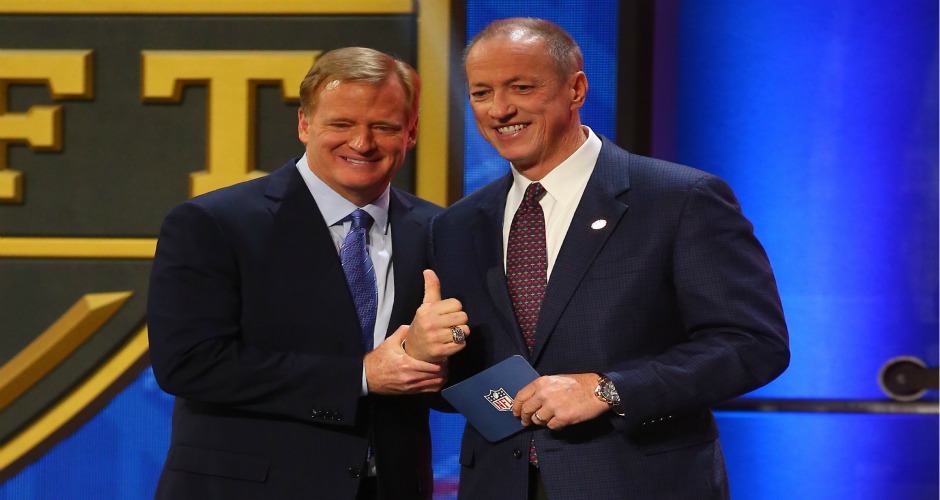 NFL legends supported the 2015 Draft in unprecedented numbers with the most former player participation in Draft history. From welcoming prospects to announcing round two selections, they made their presence known at a variety of events. It is very evident that even though they are no longer on the field, former players continue to make a huge impact in the NFL.

The first highlight began with hometown hero and former Bears linebacker Dick Butkus. As his name was called, the crowd immediately went wild. You would have thought Butkus was still on the field every Sunday in a Bears uniform. It was clear that no matter how many years go by, the city of Chicago will always appreciate his contribution to their football history.

When asked about the reception he receives from fans, Butkus said: “I feel humbled by it. You don’t expect this reaction after leaving the game 40-50 years ago. Chicago has great football fans. “

One of the most special moments belongs to former Buffalo Bills’ quarterback Jim Kelly. Before he could even address fans, the crowd stood to their feet belting out loud cheers and whistles. Barely able to contain his emotion, Kelly gratefully looked around taking in the moment.

In June 2013, Kelly had surgery to remove cancerous cells in his upper jaw. The cancer then spread to his sinus causing more problems for him up until last spring. After a long fight, he recently told NFL Network, “I feel awesome, I was just cleared after an MRI two weeks ago. I am cancer free.”

As his wife and daughter looked on, Kelly stated these heartfelt words: “If I could just take a second to thank everyone across the world, especially my NFL family, for all your prayers this last year. Last year this time, I was in the hospital not knowing if I would be here today. Because of all the prayers, well wishes, and the love I got from my NFL family…thank you, thank you, thank you. God bless you.”

The outpouring of support didn’t stop there. Former receiver Broncos Rick Upchurch talked about his battle with leukemia. He told the audience: “I’m fighting leukemia, and to my family back in Denver, I’d just like to say thank you for being in my corner.” Everyone responded with another well-deserved standing ovation.

On a lighter note, Ickey Woods delighted the crowd and Commissioner Goddell with a brief rendition of the “Ickey Shuffle.” The shuffle became his signature move when he played for the Bengals from 1988-1991.

While Woods had a little fun, others offered words of advice for players who are not drafted now that the process is complete. Hall of Famer and former Oakland Raider Willie Brown who went undrafted out of Grambling State University, says “Don’t give up. Don’t get discouraged.” He is a great example of how the tables can quickly turn.

All of the former players who were on-hand for Draft festivities remain a legendary part of NFL history. Their participation has provided us with many more inspiring memories to recall moving forward.