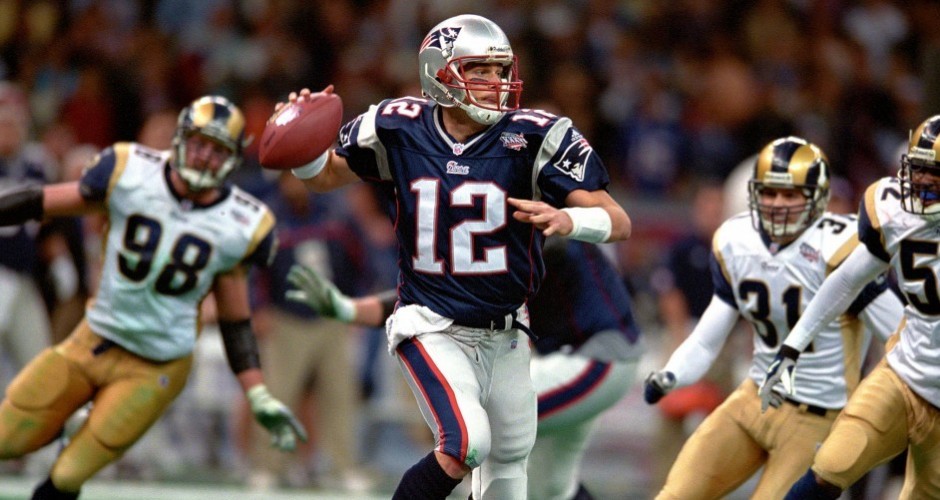 So you’re sick of the Patriots? Rightfully so, but when it comes to them playing in the big game, maybe you shouldn’t be. Whether you’re cheering for them or against them they’ve always made for a great game, and that’s all we can hope for in the final football game of the season. Before the Pats head to the Super Bowl for the third straight year, and eleventh time overall, let’s take a look back at arguable the top five Super Bowls ever played.

In no particular order:

This game started off with arguably the greatest National Anthem performance of all time – sung by the late Whitney Houston. Played at Tampa Stadium, Super Bowl 25 was packed full of legends such as Hall of Famers Andre Reed, Bruce Smith, James Lofton, Jim Kelly, Lawrence Taylor, and Thurman Thomas. Both Head Coaches, Bill Parcells and Marv Levy would eventually be inducted to the Hall of Fame as would both owners Ralph Wilson and Wellington Mara. Both teams were 13-3 in the regular season and it was Jim Kelly’s no-huddle, high-powered offense, versus Lawrence Taylor and one of the league’s best defenses. It would also be the first of four straight Super Bowl losses for Buffalo as Bills kicker Scott Norwood missed a 47-yard field goal wide to the right with just 8 seconds remaining in the game.

Played in Glendale, Arizona, Super Bowl 49 was the most watched television event in American history with 114.4 million viewers – and it did not disappoint. It would be the Seahawks second straight trip to the Super Bowl but one that still likely causes nightmares to this day. The teams were tied 14-14 at half before Russell Wilson and the Seahawks would take a 10 point lead in the third quarter. However, Tom Brady and the Pats would rally and take a 28-24 lead with just over two minutes left in the game. The Seahawks would make a few big plays getting all the way down to the one-yard line. Rather than hand off to “Beast Mode”, Marshawn Lynch, Head Coach Pete Carroll would call a pass play and the game would all but end on a Malcolm Butler interception.

Mr. Brady hasn’t always been on the winning end of things. In Super Bowl 42 he would meet his Achilles’ Heel in the New York Giants. It would be one of two Super Bowls he’d lose against New York (again in 2012) – but this one stings deeply. The Patriots finished the regular season undefeated, a perfect 16-0. At the time, Brady and Randy Moss’s 23 touchdown connections would help New England become the highest scoring team of all time. The Giants snuck in to the playoffs as a five seed and the Pats were favored by 12! New England was being regarded as the greatest team the NFL had ever seen, that was until David Tyree made one of the most memorable catches in the history of football – now known as the “Helmet Catch”. It was an improbable catch that would keep the final drive alive for Eli Manning and the Giants. Manning would eventually find Plaxico Burress for a 13-yard touchdown with 35 seconds remaining.

The following season would offer up another instant classic when the Steelers and Cardinals faced off at Super Bowl 43 in Tampa, Florida. The Cardinals won their division at an unimpressive 9-7 and would enter the playoffs as a four seed – Cris Collinsworth called them the worst playoff team in history. Well, that may have ignited the seasoned vet Kurt Warner because he and wide receiver Larry Fitzgerald went on a tear throughout the playoffs. Everything Warner tossed up, Fitz seemed to come down with, all the way through his 55-yard touchdown with just 2:37 seconds left on the clock in Super Bowl 43. If you had a chance to watch the play, there wasn’t a person in the world that could have ran down Larry. He was a man possessed. Unfortunately for Arizona, 2:37 left on the clock is an eternity, especially with big Ben Roethlisberger in the pocket for Pittsburgh. He and receiver Santonio Holmes would have the last laugh on a toe-tapping touchdown with just 35 seconds left in the game. In Arizona, they’ll still tell you he only got one foot down.

Before the Patriots were on the losing ends of one of the biggest upsets in Super Bowl history (2008), they were the ones handing out upsets in Super Bowl 36. The St. Louis Rams, aka the “Greatest Show on Turf” came in to the contest as 14 point favorites. Flat out disrespectful, but understandable as the Rams offense consisted of Kurt Warner, Marshall Faulk, Torry Holt, and Isaac Bruce. Instead of coming out of the tunnel individually, linebacker Bryan Cox led the Pats out of a tunnel as a team – a mentality they still have to this day. When the Pats ended up with the ball on their own 17-yard line with the game tied and just 1:21 left on the clock, John Madden thought Belichick should kneel it and take it to overtime. Belichick and Tom Brady had a different idea. Brady would march the offense down the field and set up Adam Vinatieri for a 48-yard game winning field goal as time expired. A dynasty was born.

They might be in Los Angeles now, but the Rams will get a chance at revenge against Brady exactly 17 years to the day come February 3rd, 2019. This time it will be the Rams that are the underdogs and the young man with nothing to lose isn’t Tom Brady, it’s Jared Goff.