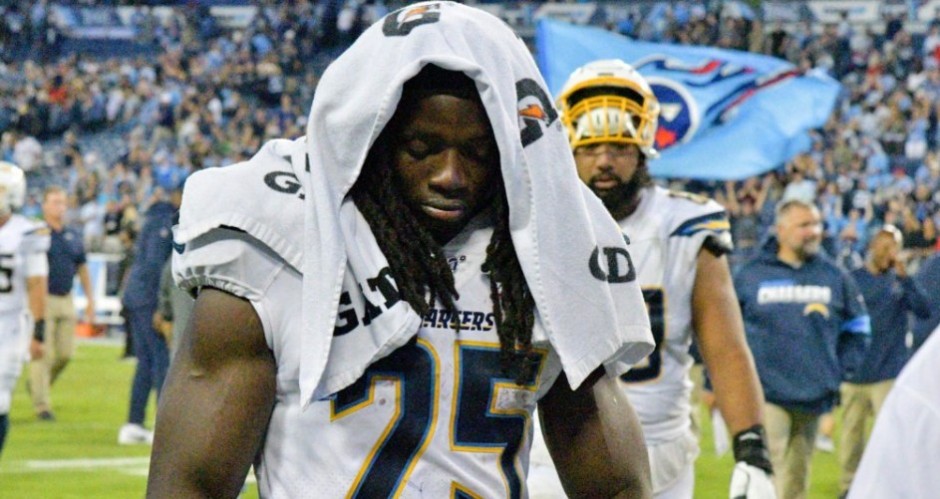 You don’t need to be a mathematician to see that Melvin Gordon touching the football is not equating to wins. Quite honestly, you don’t even need to be a football fan to see that the Chargers are a better team with Gordon on the sideline and his backup, Austin Ekeler, in the featured role. This reality – albeit, a harsh reality – was on full display Sunday in the Charger’s latest debacle, a 23-20 loss to the Ryan Tannehill-led Titans.
Melvin Gordon did get into the end zone on Sunday, much to the delight of patient fantasy owners and Chargers fans eager to see the Pro Bowl running back return to form. But his ohttp://proplayerinsiders.com/wp-admin/admin.php?page=bws_pluginsne-yard touchdown reception is nothing more than an afterthought, after he twice fumbled the ball on Sunday, including a costly goal-line fumble in the final seconds of the game that sealed the victory for the Titans.
Gordon finished the game with 32 yards on 16 carries, a dismal 2.0 yards/attempt average. This showing is pretty typical for how he’s performed this season. Through three games, the former Pro Bowl back has totaled 81 yards on 36 attempts, or 2.3 yards per carry. Gordon, you may recall, held out the first 3 games on the season while seeking a new contract that would make him one of the highest-paid running backs in the league. That decision, questionable at best, very well may have cost him millions moving forward, and it remains to be seen if his latest output – or lack thereof – will limit his playing time the rest of the season.
Austin Ekeler, Gordon’s backfield running mate was brilliant on Sunday. The Western Colorado running back scored a touchdown and totaled 125 yards from scrimmage, once again proving to be a viable safety valve for quarterback, Philip Rivers. The duo connected on a 41-yard touchdown pass that brought the Bolts to within three points late in the fourth quarter, before Gordon ultimately coughed it up on the Chargers final drive of the game.
It should be an interesting week for Chargers head coach, Anthony Lynn. Inevitably, questions about his use- or misuse – of Gordon and how his return has altered the team’s chemistry is going to be a hot topic of conversation.
Encouraging news on the horizon? There was a Joey Bosa sighting yesterday afternoon, as the defensive end constantly harassed Tannehill to the tune of two sacks and a forced fumble. Also, on the injury front, tackle Russell Okung (blood clots) has been cleared to return to the field and Safety Derwin James is no longer wearing a walking boot.