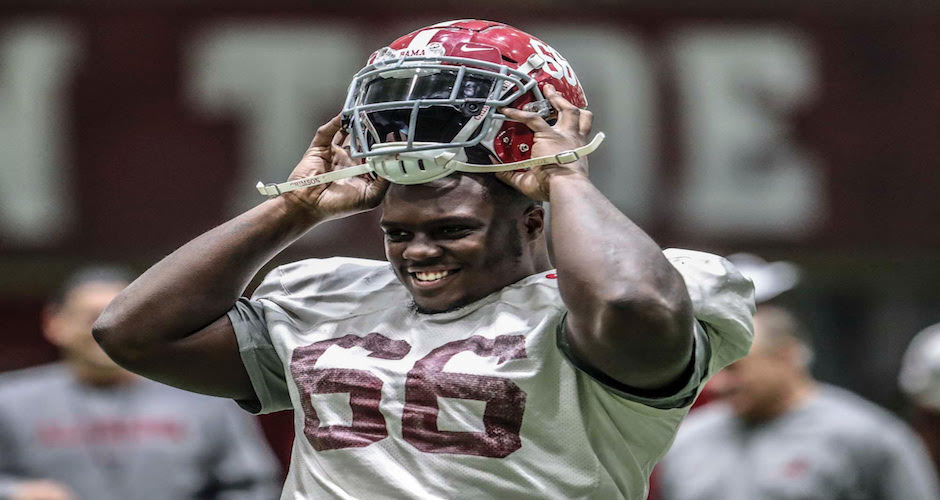 University of Alabama offensive lineman Lester Cotton, Sr. is getting ready for one of the biggest days of his life as the 2019 NFL Draft approaches. Surrounded by the people closest to him, Lester will watch the Draft from home in hopes of a NFL team calling his name. While those three days can be unsettling, Cotton will have a rare sense of calm because instead of focusing on anxiousness, he is relying on the three pillars that have gotten him this far: faith, family, and football.

A graduate of Tuscaloosa High School, Cotton was one of the top players in the state of Alabama and an elite offensive line prospect nationally. The local product’s accolades got the attention of Coach Nick Saban and Alabama’s elite football program. Lester ultimately chose Alabama over Auburn, USC, Mississippi State, and Ole Miss. Alabama was the ideal fit and provided the perfect preparation as Cotton began his journey to the NFL.

“Alabama has prepared me a lot. I feel like I got a stepping stone over a lot of other players,” Cotton explained. “There were a lot of elite players on one team and a lot of star players and first-rounders on one team. You’re going against them everyday, as hard as you can, and competing. Your preparation can’t get no better than that. At Alabama, there were no days off. We got nights to go to sleep but in the morning you had to come work. It’s like a real job. A lot of people say Alabama is the NFL, just on a college level. I shall see how that is once I get into the NFL.”

A 6’-5 offensive guard, Cotton played in four games his freshman year as a reserve offensive tackle for the Crimson Tide. Cotton really began to shine his junior year, establishing a starting role at right guard and starting 13 games. He became a powerful presence on an offensive line that was named a finalist for the Joe Moore Award and helped lead an offensive line that ranked second in the SEC and 13th nationally in rushing with 250.6 yards per game while ranking second in the SEC and 15th nationally in scoring offense (37.1 ppg). It was also around his junior year that Lester contemplated declaring for the NFL Draft.

“I had a lot of thinking to do my junior year” Cotton said. “It’s a little nerve-wrecking because you got a lot of people telling you where you’ll go. You should come out or you should stay. But a lot of times, if you want a real good answer, just listen to your parents. My mom and my dad told me they would rather me graduate and have a degree because I know football won’t be there forever. That was my solution on should I stay or leave.”

So Lester returned to Alabama for his senior year where he moved to left guard after starting 18 games at right guard in his first three seasons. The transition wasn’t easy but it made him a versatile player which is a selling point for many NFL teams.

“A lot of people think switching to left guard was easy but it really comes with challenges,” Cotton said. “You’ve got to flip the entire playbook over in your head. It’s not like it’s going to take you months to get the position down but it will throw you off a little bit because you’re used to being on one side then you go to another side. It’s like a new environment. You have to get comfortable with the people next to you. You’ve got to earn that trust and stuff like that. But Coach Saban doing that for me while I was in college is going to be a stepping stone for whatever team I go to. I can be flexible and know how to play in each position.”

Switching positions wasn’t the only big change for Cotton. His senior year was mentally tough all-around with the birth of his son, striving to overcome a knee injury, and dealing with the reality that his college career was coming to an end. But through it all, Lester remained steadfast.

His success on the field recently earned him an opportunity to be among 19 athletes participating in the University of Alabama’s Pro Day. This was his chance to showcase his versatility to NFL coaches and scouts. However, Cotton thought it was necessary to make some lifestyle changes leading up to his Pro Day debut. He shed 25 pounds and built it back up to straight muscle, changed his diet, and worked with a trainer to improve how he worked out. This turnaround gave him the boost he needed to perform well.

“When it got to Pro Day, I was really confident,” Cotton shared. “I didn’t have no type of nervousness. I just thought of it as a day to prove myself in front of a lot of teams and that’s what I did. I felt like I did really good. I had a lot of workouts afterwards with a lot of teams. I had a lot of calls. I was really happy to get that opportunity because not a lot of people get that opportunity in a league like this.”

Now he awaits the final piece of the puzzle as the NFL Draft nears. Cotton left Alabama with two National Championships, four playoff appearances, and a degree in Exercise Science. He plans on returning for his Masters in Kinesiology. Additionally, obtaining a degree was one of his biggest accomplishments, making him the first person in his family to graduate from college.

Born in Tuscaloosa, AL, and raised in East St. Louis, Illinois before returning to Alabama, Cotton spent most of his time with his mother. His father was present but lived in another state which meant there were times when his mother played both roles. Now a dad himself, his mother’s influence is still a big part of the man he has become.

“My mom played the fatherhood role a lot,” Cotton said. “Raising three boys is no walk in the park. She sacrificed a lot to make sure we were alright. She always taught us if we just put God first and let him lead the way then everything else don’t matter. That’s just what we went by. Plus we’re a church family so we just always put God first in everything. My mom just said if I ever came into a situation where I didn’t have answers, always talk to God. He’ll find a way for me to find the answer to see what I need to do.”

It is the faith his mom instilled in him that has served as a strong foundation throughout his life. Especially when he faced challenges and adversity. At a young age, Cotton experienced bullying and while it admittingly bothered him, he turned it into inspiration to give back to both the East St. Louis and Tuscaloosa communities. He is often a motivational speaker to students at local schools to help them through similar issues or to just provide them with encouragement and direction.

“Once I get to another level and have more funds, I can do other stuff,” Cotton said. “I want to build a program for people who have been through bullying, fighting depression and stuff like that. When I was younger, I was being bullied so I know how that feels. Can’t walk into the school and have a normal day without someone picking on you. I just feel like people like that need to be heard of or spoken about. Those guys might be really talented but somebody that don’t like the fact that they’re talented, and they not, will try to keep them down.”

In addition to giving back to the community, his family keeps him going on many different levels. His son and fiancé are two of his biggest motivators.

“My fiancé and son have made me so much stronger than I ever was,” Cotton said. “My son is like my own little alarm. I wake up before he wakes up ready to go. I love my family. God, family then football. Football is not always going to be there but my family is always going to be there. I just want them to know that when I come home, I’m not just this athlete. I’m a fiancé and a dad.”

More than an athlete

Just like the rest of us, Cotton has a variety of talents and interests. Although football is his passion it doesn’t define him. His father encouraged him to learn how to do other things besides football. Some of his hidden talents and skills include detailing cars, laying bricks, building homes, and pouring concrete. Most surprisingly, Lester revealed that he likes to draw and sketch.

“I just picked up a pen

cil and started sketching,” Cotton said. “It would turn into a whole picture of something. I drew Will Smith once. I drew myself once. It’s not an art museum picture but you know exactly who it is when you see it. It’s just something I like to do on the side when I’m in a good mood.”

Cotton is also a Marvel movie fan with Thor and the Avengers being his favorites out of the collection but not for the reasons you may think. Cotton appreciates the way the Marvel characters come together as a team to accomplish a task as a unit. It reminds him of his days at Alabama.

“It wasn’t like this big star on the field that was trying to do it all for himself. We were all working together to dominate the next team, to dominate the next play, to score a touchdown, to stop them from scoring, and all this stuff. That’s why I like Marvel. You see the team working as one like we did at Alabama.”

His musical interests include rap but when it really comes down to it he can always count on old school classics to get him through.

Similar to many other NFL Draft prospects, Cotton will find out his final destination between Thursday-Saturday. His good friend, former Alabama teammate, and Jacksonville Jaguars offensive lineman Cam Robinson has given him one helpful piece of advice as he prepares for the next level: “be ready to work.”

The process hasn’t been easy but his family will be right there with him like they have been his entire journey. In fact, the support of his mom, dad, brothers, fiancé, and son have pushed him when he didn’t have the energy to push himself. Although he isn’t looking forward to being away from them to pursue his NFL dreams, he’s ready to prove himself. It doesn’t matter what team dials his number.

“When Draft comes, whoever calls is going to be surprising to me,” Cotton said. “I’m just hoping my name gets called.”

No matter the outcome, Lester Cotton, Sr. knows he has done everything he can to come out on top.