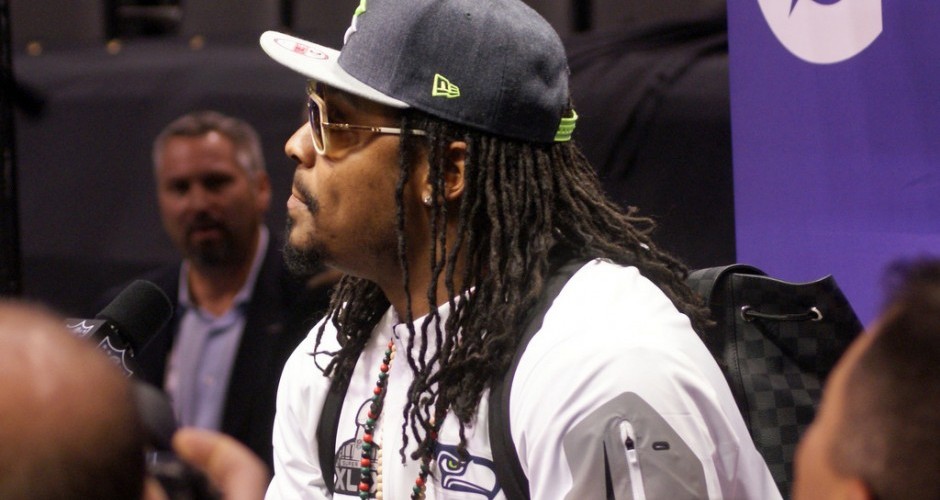 Only 90 percent of NFL players will never get a chance to play in the most watched show on Earth.  For the 10 percent that do become Super Bowl contenders, Media Day is a perfect place for them to open up about a range of highly entertaining topics. Imagine football talk mixed in with a guy wearing a barrel.Yes, that is Media Day.

With that being said, no stone was left unturned this year. Pro Player Insiders uncovered everything from Michael Bennett professing his love for Wyatt Erp hats to breaking down fashion and hair, to Beast Mode speaking eight words and Revis Island reflections. As expected another common theme, for both the Pats and Hawks, was the overwhelming feelings of what it means to be playing for a world championship ring.

Here are the most entertaining quotes of Super Bowl XLIX Media Day:

We must start with the most impactful quote form Media Day, compliments of Mr. Marshawn Lynch. Drum roll, please. The Beast Mode expressed his deep most feelings about his experience 29 times by saying, “I am here so I don’t get fine.”

Russell Wilson “I have to shout out Jermain Kearse on making the game winning catch, just gives you the chills down your spine…it’s a testament to our season and our resilience.” Wilson went on to mention on a lighter note the player with the most moves, “I’d have to say the best dancer on the team, is Richard Sherman. As for the best style…yes Earl and Michael Bennett have great hats on and fashion sense.”

Doug Baldwin spoke up about getting off Revis Island, “You know what? I am going to bring my sunblock, my shades, my hat and I am going to go to Revis Island and see what I can do. I will let you know after the game (how it goes).”

Kam Chancelor said after sitting in the same seat as Rob Gronkowski for Media Day and will be covering him Sunday. ” I text messaged Gronk last week about non -work related stuff. Yes we are friends. I mean I guess it was destiny. It was destiny for us to have the same seat.

Michael Bennett on his hat and stress leading up the big game, “I like my Wyatt Erp hat.” And as for stress, “I’m never stressed, man. I wake up every day and look in the mirror and say, ‘Damn, I look good,’ so I can’t be stressed.”

Earl Thomas mentioned the continued support of his family, “My brother plays a big role in my life. Together (with Seth Thomas) we have really gotten our foundation going for the community.” And as for his style, “I got my country swag going that’s what is up.”

Offensive linemen J.R. Sweezy and Lemuel Jeanpeierre each respectively said, “It means a lot to me to be here. We truly are grateful to be blocking for Russell and fighting for the Twelves’.”

Marcus Burley is only a 2nd year DB but he brought his lucky backpack to media day. “I don’t leave home without it. Can’t you tell?”

Tom Brady on potentially tying Joe Montana and Terry Bradshaw for four Super Bowl wins, “It’s hard to think about those things. I am fortunate to be on some great teams. Those guys are unbelievable players. I was the biggest 49ers fan growing up and to watch Joe and Steve young -my idols-were just great for the sport.”

Darrelle Revis, when asked who the best cornerback in the NFL is by Hall of Famer Deion Sanders, “Who’s the best corner? You are, Deion… You can answer that question. I don’t know. Everybody has a lot of opinions. I respect them all. We have a lot of great corners in this league, I could go down the list… it’s a bunch, man.”

Brandon Browner on being a Seahawk, Patriot, and a Beaver, “Well, I think Belichick and Carroll have the exact same football IQ. Although it was hard watching my former teammates last year in the Super Bowl, I am fortunate to be here this year with Belichick. It’s a dream come true.” Of course Browner went on to shout out his Alma matter Oregon State, “Oh, and I am proud to be representing Beaver Nation. OSU, fight, fight, fight.”

Vince Wilfork spoke fondly of his wife, Bianca, “She has always been there for me during the good and bad. She is the one person I can count on. Being out of football, she was the one who pushed me. She woke me every day at 5 am or 6 am and we would work out three times a day. She has pushed me to the max. I am so grateful to have her in my life.”

Rob Gronkowski made it clear who the best and worst dancer on the team was, “Julian Edelman. He’s the worst dancer. Well, the best dancer? I mean, since I’m the only one who really whips out my dance moves, I’d have to go with myself.”

Devin McCourtney, spoke about sharing his success with his twin brother that plays on the Titans, “My mom, a single mom, raised two children that made it to the NFL. That is pretty remarkable. We share that bond and…technically my twin brother will be the first Patriots twitter handle to tweet after we win the Super Bowl (we share twitter handle).”

Duron Harmon mentioned his the best moment thus far in his career, “Of course wining the AFC championship. That was huge. I am really proud to be on this team and with (former Rutgers teammate) Devin McCourtney who is more than a brother to me.”

Dont’a Hightower points out his teammate’s beard, “I don’t know who has the best hair, but….look over there (points to Robert Ninkovich). Niko wins the best beard award. It’s so long and fluffy.”

Lagarrette Blount on his hair, “Of course I got my hair twisted. BOOM. It’s got to stick out of my helmet just right.”

Jimmy Garapollo, only a rookie, expressed his gratitude for the moment for the first time coming out here yesterday, just arriving on the plane was kind of surreal. You sit back and say, ‘Am I really going to the Super Bowl?’ It’s exciting. Also to share it with my family and my brothers who all played football at some time in their lives.”

And that’s a wrap for the excitement circus we call Media Day.  Topping the list of quotables, as expected, was Seattle’s Bennett and Boston’s Gronkoswki. Looking back, this is day that could possibly go down in history… but only because Lynch stuck around for 5 minutes.