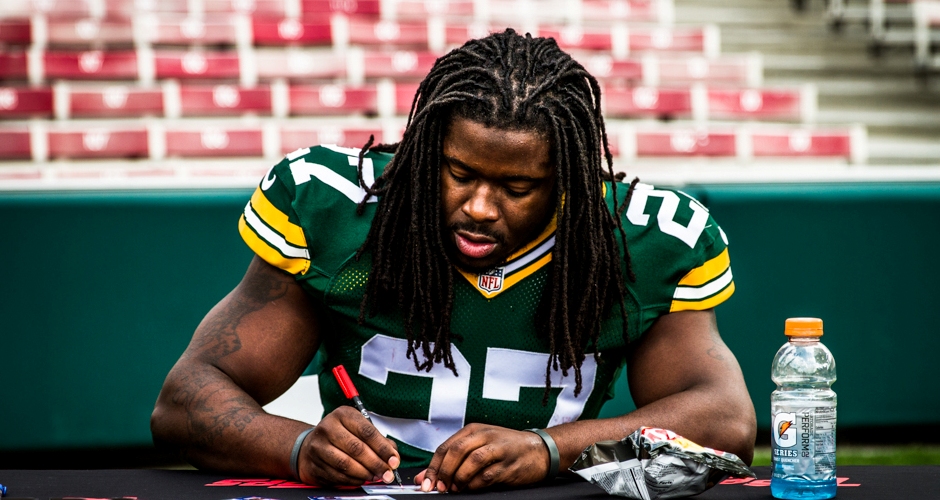 Green Bay Packers running back Eddie Lacy, who led all NFL rookies and set a club rookie record with 1,178 rushing yards, was selected as the 2013 Rookie of the Year, chosen in voting conducted by the Professional Football Writers of America (PFWA).

23 year old Eddie Lacy, Attended University Of Alabama on a athlete scholarship. In 2013 The Green Bay Packers selected him in the second round, with the 61st overall pick of the 2013 NFL Draft.

Lacy passed the 1000-yd season mark on December 15 against the Dallas Cowboys where he ran for 141 yards and a touchdown on 21 carries. Lacy finished the season with an impressive 1,178 yards and 11 touchdowns with 257 receiving yards.

Lacy beat out San Diego Chargers wide receiver Keenan Allen and Cincinnati Bengals running back Giovani Bernard for AP Offensive Rookie of the Year. This award is a fitting tribute to a player who not only broke John Brockington’s long-standing franchise record for rookie rushing yards, but also turned a weakness of the Packers into a strength.

Pro Player Insiders caught up with Lacy on the NFL Honors red carpet and the press conference after his award was announced.