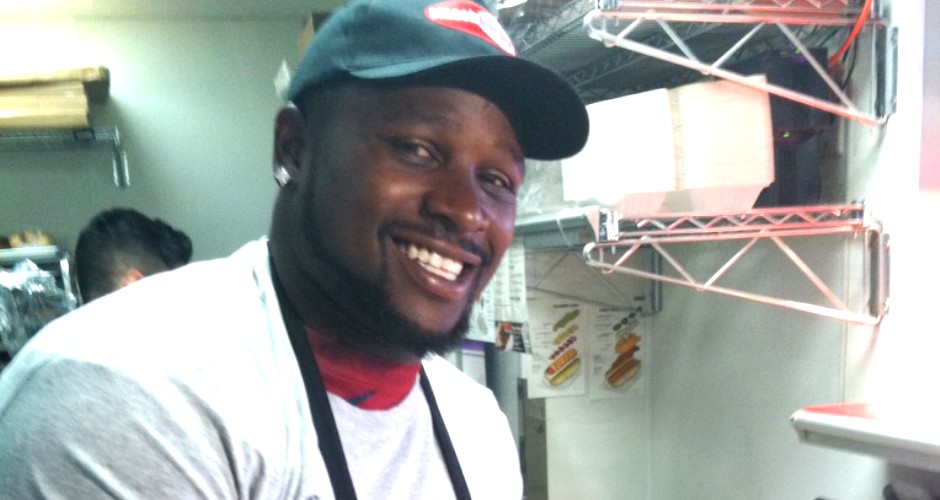 What if I told you that a San Diego Chargers’ player has found a way to thank our Nation’s heroes by indulging himself in a delicious meal?  Well, fullback Le’Ron McClain shows his appreciation and his taste buds are thanking him for that.  He has partnered up with ‘Smash Burger’, to help raise money for the Wounded Warrior Project.  The WWP is exactly what it sounds like, a charity organization that helps veterans who have sacrificed life and limb to keep out Country safe.   Their mission, to get peoples’ lives back to normal, emotionally, physically, and financially.

It has always been a passion of McClain’s to help the Wounded Warrior Project, and now he’s teamed up with Smash Burger to help raise money for it.  Five-percent of the proceeds raised will go to the WWP to help courageous men and women who have returned from combat.  The other contributor for this event is Smash Burger, a popular burger chain which got its name from the way the company makes its burgers, which is by smashing a ball of ground beef with an iron like metal to let it sear in the juices.  This event took place at the Smashburger in Hazard Center near Fashion Valley Mall, but the chain started in Denver Colorado.  You’ll be happy to know that no one in the place was rocking our division rival’s jerseys.

Now LeRon admits he’s no chef, jokingly stating “Nope my Fiancée handles that.”  But this day really proves that the gridiron and grill iron are two completely different departments.  So after getting the breakdown of how a ‘SmashBurger’ is really made, and getting a demonstration from Vice President of Quality Control, Steve Sandavol, it’s time to get to work.

McClain prepped his bun with all his favorite fixings, but the biggest challenge was the grill.  He started on the burger, following the list of ingredients written down by Mr. Sandavol, which included some ‘SmashBurger’ secret spices.

So how did the two time All-Pro score in the kitchen?  Mr. Sandavol gives him a 60/100 which is D+ at best.  He was told his burger flipping could use some work .  McClain couldn’t stop laughing and kept saying, “A 60? Really man? A 60?” McClain had everyone in the kitchen laughing.  Finally, the Bolt Up Burger was created!

McClain also got to see somebody his creation directly benefited.  He was greeted by Licach Harris who is the stress and recovery manager for the Wounded Warrior Project and an Injured Veteran named Norbie who lost his arm while in combat.

He then took pictures with fans and Smash Burger employees and got a PB&J milkshake to go with his Bolt Up Burger.  Another successful campaign by LeRon McClain, finding another interesting way to give back to what he believes in.  He left with a smile, and probably another pound or two on top of his normal 260.