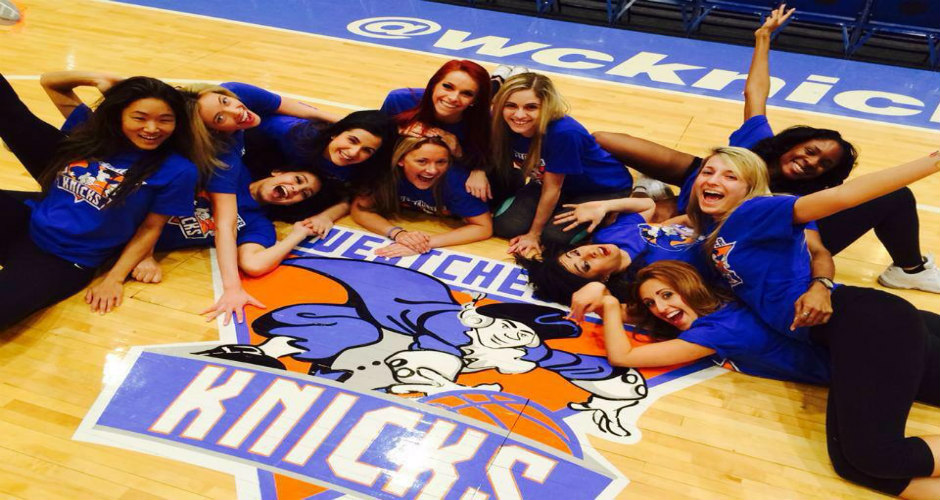 Trying out for anything is always a leap of faith, but having as much inside knowledge as possible never hurts. So, as promised we will further divulge tips that will hopefully get you one step closer to stepping onto the court, field, or ice rink for your favorite team such as: technique, prep classes, social media (yep, that’s right…it’s a new day and age), makeup, and veterans.

Technique: Do you have the proper training for the specific team you are interested in? Maria states that The Brooklynettes, ”always have a double turn and a calypso in their tryout routines.” So those two tricks are a must when walking into the tryout. Maria also says, “The Brooklynettes also have a tendency to use props while performing their pieces. For example: canes, rags, flags, etc.” With so many props, the skill of memory is a must, because props are an eye catcher, and if one goes up or drops at the wrong time, it’s a definite blemish in the routine. Along with The Brooklynettes, Maria articulates, “The Lizards also add a battement, double turn and calypso into the routine, in order to see the constants show off their talents.” Technique is a learned skill, and can be acquired by jumping in dance classes around your town. Make sure to do your research on the team you are considering to see what might be some performance additives in their tryout piece. (A little hint in uncovering their technical preferences, because it won’t be stated on the FAQ page for tryouts, is to get on YouTube, and watch their dances from the previous years.)

Prep Classes: I have yet to find a team that doesn’t offer some type of prep classes before their tryouts; you might have to search them out and dig deep on the websites, but they are there. They all range in price; some are taught by the coaches and others by the vets, but getting your face in front of the decision makers is one way to get a leg up! The girls also stated, that going to prep class gives you an opportunity to ask the coach questions in an open forum, so that you have no hesitations when walking into tryouts.

Social Media: In today’s world we deal with social media day in and day out. And don’t kid yourself by thinking that the decision-makers aren’t going to go and check out every social media platform they can find you on. Before you even step foot into tryouts, clean your pages up; no cussing, minimal alcohol, and if you are under 21 absolutely NO alcohol, no backsides to the camera, watch for racy clothing and take notice on how opinionated you are. If you make the team some squads, such as, “The Flight Crew (Jets) is huge on social media, which is the complete opposite of The Eagles. The Flight Crew use their social media to give the fans an inside look at how they represent the team and live their lives. Each cheerleader has an Instagram under the Jets representation, such as: @(CheerleaderName)_JFC. The Flight Crew Cheerleaders have a personal page and are to maintain a Flight Crew Cheerleader page as well. Eagles have a Twitter, but are to delete all other personal social media if you make the team,” says Gillian. With that in mind, make sure you are versed on communicating on these types of pages. Social media also plays a roll during the actual tryout portion. More and more teams are enabling fans a chance to speak their mind and “are allowing a fan voting round. Teams will make an online profile for each finalist and set up a system for the public to cast votes for their favorites. Sometimes a fan favorite is chosen to be on the team and other times voting percentages are factored into final scores, such as the Sixers,” says Maria. With fan voting, it’s not a bad idea to start a personal social media page before tryouts to make the promoting of yourself more readily available, if that part of tryouts comes about.

Makeup: First word of advice, one that I was personally given is, if you don’t know how to do your makeup, have someone who understands the tricks of the trade do it; look to Sephora, MAC, a friend or a reference. Also know what the team you are trying out for is looking for. One example, as Gillian says, “Denise, the Jets coach, wants the girl next door. She doesn’t want too much eyeliner and she is good with straight hair, no need to curl it. She is all about a fresh face, a little blush, but overall keeping it simple. You can go to tryouts with a plain Jane sports bra, less eye makeup, and not as tan. Not about the glitz as much. She wants that fresh face, pure and natural beauty; who are you in the morning at your house getting your coffee?”

Veterans: Kristie, Maria and Gillian all spoke on how the veterans for teams in the northeast don’t typically show up to the first round. Some teams allow the captains to bypass the majority of tryouts all the way up until finals. This was a surprise to me, as for the team I cheered for, The Houston Texans as well as other teams in The Houston area such as: The Rockets, vets, no matter their tenure were to tryout every year. The girls did inform me that in these early rounds the teams did have some vets assisting with tryouts in some form or fashion, so they were still present. Some teams create an apparel theme for the vets to follow, so they are easily identifiable. Maria gave examples such as: “Greek goddesses, which was basically white and gold apparel, or super heroes, black leather.” Remember though that just because they are a veteran doesn’t mean they have an automatic spot on the team; you CAN take their spot. If you show your desire for that position and out perform them, you can easily replace them, so go in with confidence and don’t compare yourself to anyone else.

It’s go time! You have the tools. Now go in with your own unique persona, but one that falls under the umbrella of the team you are most interested in, and fight for your dream. And when it’s your time to dance, remember that you are there to better yourself and whatever way you are willed, that tryout will teach you something you can take with you forever. Go and fight for what you want, I promise it’s worth it.